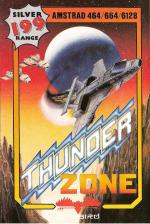 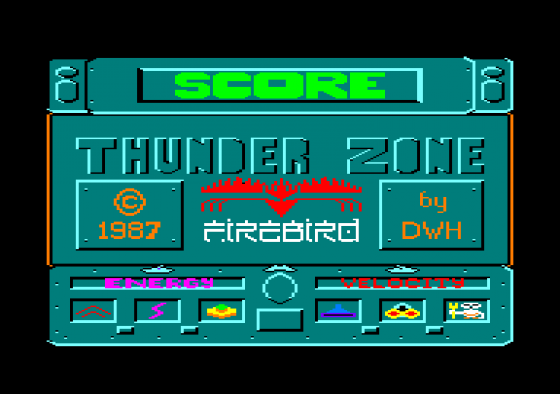 Firebird treads dangerous ground with its latest cheapie, Thunderzone. This spaceborne give-'em-hell has the standard enemy saucers to laser, but the evil aliens are called (let's whisper it!) Zircons.

Earthlings of the Guardian-reading persuasion will remember the case where the Duncan Campbell Being came under no little flak for mentioning a satellite of the same name in a (subsequently impounded) TV programme. Since then, the merest whisper of Z*cn is rumoured to bring burly uniforms down from great heights to protect National Security.

But Firebird is made of stern stuff, and now you the player can aim lasers at aptly named chunks of space hardware. Chuckle. The story goes that a vital mining settlement on Flavius V (hmmmm...) is under attack, and you the hero are sent up in your space fighter to marmalise the Zirconians.

From your pilot's seat in your craft the view is a bit too clear for comfort. In the big screen, those Zircon satellites swirl and shoot. Below that, there are various icons showing the state of the shipborne weapon systems. These show the sector status (how many nasties infest your area), damage level (guess...), compass settings, power level, speed, what sort of weapon is currently ranged against the forces of Zed, and the repair droid. All important things to bear in mind as you veer from vector to vector in battle against them the aliens.

As is common in spacefighters, the entire shooting match is controlled from a late-twentieth century invention, the computer joystick. First noted in the mid-seventies attached to a Space Invader machine, this control mechanism has evolved until it can handle a complete craft. In this case, pushing the stick forwards accelerates the ship, movement to either side changes the compass setting (and thus the direction of thrust), and pulling back switches the control icon.

The control icon shows which aspect of ship functionality is activated by the final control on the joystick, the fire button. If the laser is selected, the fire button causes megawatts of photonic death to leap towards anything that has the misfortune to be flying directly in front of the ship.

A couple of backward tugs on the stick engages the scoop. This interesting machine reaches out from the craft to pick up any energy packs that might be floating around at the appropriate locus in space. These help repair and refuel all the ship systems. The scoop can also make a mess of aliens, which is all to the good.

If things get too sticky, the control icon changes colour as it passes under the systems in trouble. This is usually an indication that it might be a good time to employ that repair droid.

There are lots of sectors to clear of the Zircon menace.

Each must be completely free of the invaders before you go on to the next, or they'll take advantage of your absence to replicate themselves and you'll be no better off than before. It's no good wiping out 99 per cent of household evildoers, it has to be 100 per cent or nothing. So go for it!

There are two games in one with this £1.99 Silver release. Number 1: Zap the Aliens, Number 2: Guess which screen shot on the packaging is upside-down. I'm glad to report that game number 1 is more fun.

True, it's all been done before, but there's definitely two quid's worth of game for the trigger-happy and light of stick. Mind you, the controls take a lot of getting used to as the veteran starship trooper might well find the peculiar joystick usage confusing. Worth the candle.

Budget games have become the potboilers of the computer industry_ This game has a few novel twists, the compass control for one, but otherwise is a straight first person shoot-'em-up. If it's raining and you are bored then it is a cheap afternoons entertainment, but don't expect wonders.

And the prize for the biggest on-screen scoreboard goes to Firebird, for their third of a screen effort with Thunderzone.

Seriously, the profusion of budget games must encourage experimentation, and the game control is novel if nothing else. For such as I, used to steering the ship by up/down/left/right stick control, it can be difficult to manage the Thunderzone system. But it's a competent enough budget game unlikely to disappoint. 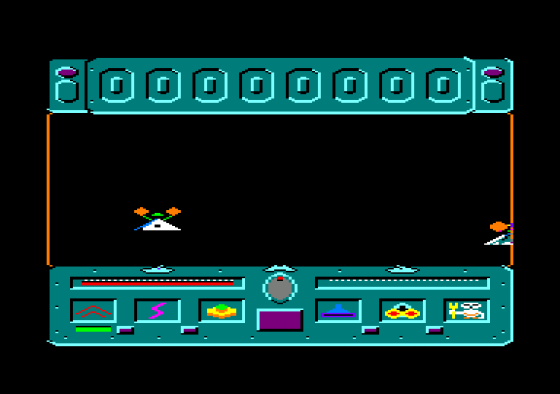