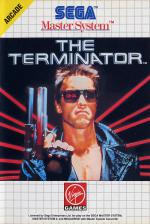 Based on the classic film, The Terminator's an addective game with all the right shoot-'em-up ingredients. The main thing you notice is how tough it is, but not enough to put you off.

It begins in 2029, where an intelligent computer system, Skynet, has set its machines against the humans... and won. But the resistance movement's growing stronger all the time, thanks to the leadership of John Connor, so Skynet have sent a Terminator back in time to kill his mother, Sarah, before she gives birth to him.

You're a resistance fighter, Kyle Reese, who has to shoot everything in his path and stop the Terminator. On each level there are tasks to complete before you can exit and you've a certain time to achieve them. On the first level, track down and destroy the Time Displacement Reactor and destroy it.

This is easier said than done: before you can get to the reactor, you fight through Terminators and robotic nasties. Destroy them by using the machine guns and grenades you can collect then find a detonator to prime the TDR bomb.

Later levels take place in 1984, first on the screen of New York then in a night club, police station and a steel works for the final showdown with the Terminator.

The Terminator's one of the moat impressive 8-bit carts around. The graphics art on par with those of the Mega Drive version. Digitised speech, cool music and high quality pics between levels show the attention lavished on this game. Top of the shoot-'em-up tree and one of the best MS carts of any kind, The Terminator's a must.

Top of the shoot-'em-up tree and one of the best Master System carts of any kind, The Terminator's a must.