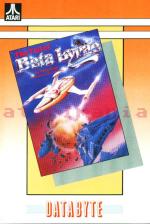 Despite its novel title, The Tail Of Beta Lyrae turns out to be none other than a cloned version of Skramble, a game that first saw the dim light of an arcade about three or four years ago.

Basically the game consists of flying a fight spacecraft through a series of caverns. The happenings on screen are displayed in standard two-dimensional, cross-sectional mode. Your view is from the side.

The spaceship flies from left to right through the caves but can accelerate or decelerate, and can move up and down. The cave scenery scrolls smoothly to the left as you progress.

The cave system is divided into a number of sectors, each being further divided into subsectors. Your progress is marked by indicators at the top of the screen.

If you lose one of your lives by crashing into something solid, or getting shot down, you continue from the particlar sector and sub-sector where the disaster occurred.

Lose all of your lives, though, and you are right back at the beginning of the complex again.

Each sector gets progressively harder, with the caves ever more claustrophobic and twisty. Likewise the quantity, variety and perniciousness of the cave's defence systems grow with each passing sector.

The defence systems consist of two main elements. Firstly, there are obstacles which block your way but don't go out of their way to attack your ship.

These consist of such things as generators, scanners, antennae and mid-air barricades.

Secondly, there are the actively aggressive components such as alien vessels, asteroids and different types of ground-to-air missiles - rockets, lasers and plasma cannonballs.

Particularly nasty are the Backbiter missiles which, as their name suggests, fly up at an angle towards the unprotected rear of your ship.

Your sole means of defence, apart from agility, is a forward-firing, repeater cannon which is used to blast any obstacles and attackers that are destructible - and not all are.

If you are skilled enough to reach them, there are city settlements and the aliens' powewr generators within the complex. Your mission is to destroy these generators.

The game allows up to four players and has six skill levels, Level 1 being tough and 6 plain suicidal, so fast and numerous are the attackers and hazards.

You may choose to have five or seven spaceships at your disposal.

One unusual feature is that the caves and their contents appear to be randomly generated during play, so the game is different each time you start up your spaceship.

The drawback is that there is no way you can map the cave layouts, thus making eventual victory that much more difficult.

Not an original game by any means, and I missed the ability to bomb as well as shoot that other versions have included. Even so, this is the best Skramble clone I've seen on any micro.

Presentation, graphics, sound effects and music are all good quality, and with its random generator and range of options, the game should prove to be durable.

The Tail Of Beta Lyrae is an exciting and challenging shoot-'em-up that any fan of the genre would enjoy playing. A first-rate implementation of a classic arcade game.

An exciting and challenging shoot-'em-up that any fan of the genre would enjoy playing... A first-rate implementation of a classic arcade game.