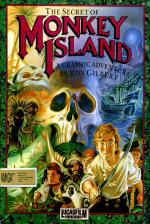 Adventuring finally makes the mainstream with The Secret Of Monkey Island - a game so stupendously funny, they could make a film of it

Ah, Lucasfilm adventures. Never something I really got the hang of, or took a shine to, to be honest. I found the earlier efforts distinctly C64-like in style, with the mouse-controlled input system as much of a hindrance as a help. To cap it all, I found it hard to get out of my head the idea that using moving graphics in an adventure wasn't much more than a gimmick, doing little or nothing to help gameplay at all.

That was an easy enough line to take with the early efforts. By the time Loom came along, with its stronger plot, improved graphics and easier player interface, my position was starting to look a little tenuous, however. The game may have been far too easy and a little ragged around the edges, but it was undeniably good. A quiet triumph for Lucasfilm, then - but nothing compared to what they've come up with now.

With The Secret Of Monkey Island, the mouse-controlled, graphic-adventure comes of age. This is a truly excellent game, easily the best I've seen this year. It's hard to think where to start with describing it, so let's take the traditional route and begin with... the plot.

Unlike so many adventure games, Monkey Island doesn't simply use the scenario as an add-on, easily changeable backdrop to the game - here the pirates/treasure/ghosts/island atmosphere so permeates every aspect of the game it would be impossible to imagine it without them. It' sets a new standard of mutual dependence between location and game that others will find bloody tricky to follow.

Specifics then. You play this helpless little guy called Guybrush Threepwood, a wannabe pirate, all-round turkey and general starting-from-the-bottom everyman. You know the type. The game opens with his arrival at Melee Island, the idea being to guide his stumbling steps towards true piratehood, and beyond (Beyond? Well yes - as things unfold, you'll discover that achieving the status of swashbuckler is only the beginning. There's much buckling of the swash to be done after that. This isn't Skull And Crossbones, that's for sure.)

One of the very best things about the game is the way a fairly sophisticated sense of humour is incorporated into the game. I know what you're thinking - humour and computer games go together like Prince Charles and Samantha Fox - but think again. As much as it can be said that anything does, it's the humour that really makes Monkey Island. It's intrinsic to everything. From the way just about every character in the game gets your name wrong ("Threepwood, my name's Guybrush Threepwood!" you find him screaming for the zillionth time), to the patter of the used ship salesman (whose arms seem to jump about in time with his over-used mouth), who would rather give you his granny than lower his prices, it's packed with characters and situations to make you smile or simply burst out laughing. I particularly loved some of the commands possible ("Talk to men of low moral fibre" becomes an option when you confront some pirates), and the way you can even hold what is probably an intelligent conversation with the dog. Apparently, Fido actually gives the solution to the whole adventure away, but unless you know the doggy-lingo, you'll just have to fathom it out yourself.

Then there's the... but no, I'm not going to give you any more examples of the humour, partly because it'll spoil the whole experience for you when (not if!) you buy it, and partly because, like all great comedy moments, you really do have to be there.

So leaving atmosphere, plot and the like aside for a moment, how does it all work in a more technical sort of way. Well, for a start you have to take on board that none of this character control lark is done by typing. Most of you will realise that already, of course, but just in case you've just tuned in to the Lucasfilm channel and aren't familiar with their thang, you may be pretty amazed to lean that the whole thing is done with the mouse, using a point-and-click interface. This means that at any point in time, the computer will display all possible options on-screen. Even when holding conversations with other characters, all you have to do is move the mouse onto one of the various possible lines on offer, then click the mouse button. Hey presto, your character speaks. It may sound a bit limited, but in fact it's anything but - because these options are so context-sensitive, that the command system comes across as being very splendidly smooth and easy to use. Lucasfilm have managed to find a compromise between the fluidity and flair of a rigid storyline and the intelligent realism of more free-form adventures - it's a system that allows you to more or less forget about the specifics of what you're actually physically doing (sitting at a desk with a computer in front of you, presumably) and lose yourself in the adventure instead.

Oh, did I tell you about the music yet? No? Well, I sure hope you like reggae - this is one program that really skanks (translation for non-music types: It's got a rather spiffing Jamaican beat). Bob Marley would be proud of these tunes (well, fairly proud). And that's about it for presentation. Great atmosphere, pleasing humour, lovely sound, the best input system we've seen yet, not to mention the pretty stupendous graphics (I thought I'd let you take that as read), there's only one aspect of the game we haven't really touched on yet - just how well has the actual adventure been designed? It's the sort of thing that can really sink (sorry, accidental pirate pun) an otherwise excellent game.

Which is why I'm pleased to say Monkey Island has been designed better than any adventure I've ever seen before. (Had you worried for a minute there, eh?) Everything shows such attention to detail and consistency of form that you are completely drawn into the whole piracy experience - it would be no exaggeration to say that, no matter how you progress through this game, the resultant series of events could easily be used as a script for a pirate movie. And what a box-office smash it would be! (Okay, so a couple of the jokes have been ripped out of The Princess Bride, but they were worth telling again anyway).

Just think for a minute - how many times have software companies boasted that their product really is "Just like taking part in a film", and "A truly cinematic experience". And how many times have you thought, "Hmmm, well sort of," and been vaguely disappointed?

Well, be disappointed no longer - here's the first game I've ever seen which really justifies such claims (even though - to Lucasfilm's credit - nobody's actually making any!) We're not just talking about screen displays that look as if they were done under the guidance of Ridley Scott, all eerie blues and arty angles, either - it goes further than that. Move your guy, and he'll actually react correctly to the 3D-ness of the scene, the camera panning all the while. And of course that groovy music I've already mentioned actually changes to suit the scene too.

The lastability of the game is the only sticking point, but this is a problem that can't be avoided with adventures. A projected 30 hour play time may not seem like much for £24.99, but when it's 30 hours of pure fun and satisfaction, it's not much of a gamble.

If this review seems just too enthusiastic, there's a very good reason for it. I can't remember the last time I enjoyed playing a computer game so much. Even the fighting sequences are done with flair, insults being much more important than sword-fighting skills. Forget all those milestone adventures (Zork, The Hobbit, Lord Of The Rings et al) - for sheer enjoyment and general all-round perfection The Secret Of Monkey Island creams 'em in all in style. I just can't wait for the sequel.

Melee Tours would like to welcome you to the fascinating and sometimes eye-opening place that we call 'home'. Thrill to the perpetual twilight! (Yes, folks, the nightlife never stops!) Chat with the locals! Yes, Melee Island really does have to be experienced to be believed. Once you're here, you'll never want to leave (which is just as well). NB: Don't feed the pirates.

Uppers: It's taken ten years, but the first truly accessible adventure is finally with us. Keep this game in a plastic bag, because the atmosphere really does drip from it. Graphics, sound and plot - everything gels perfectly.

Downers: Erm, I can't really think of any. Except perhaps for the sluggish way in which the parser scrolls, and for the oh-so-slow save and load screen. 1 meg required.

If you love adventures, buy it. If you don't, buy it anyway. In fact, even if you don't own a computer, rush out and buy your copy now (and get yourself an Amiga while you're out). A ripping yarn and no mistake.

A ripping yarn... I can't enthuse about Monkey Island nearly enough. It has been designed better than any adventure I've ever seen before.