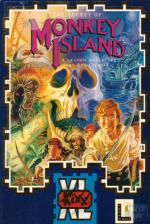 Monkey Island received a very enthusiastic assessment when first reviewed by Amiga Power way back in issue two: "This is one program that really skanks."

So the only question that really needs answering now is whether or not the passage of time has tarnished it in any way. The answer is a sort of mixed bag of hums, ho's and yes's and no's.

Graphics for adventure games have moved on since Monkey's inception date. Nevertheless, if you didn't see it first time round, the humour's still there. The gameplay's still there, as is the slightly clumsy control interface (I say this in the context of having played Ishar 2 for a fair old while).

The graphics look dated and it can get annoying having to wait for the character to finish their speech. Whatever you do, don't ask the 'important-looking pirates' what constitutes their grog. If you do, you'll be there long enough to make a cup of tea, brush your teeth, read the paper, watch the news and still have enough time to walk the dog before you return to the game. By this time, the rather laboured joke might have reached kerosene as one of the grog ingredients.

But hey, don't take this as a knock on the game. The plot is way above the standard of an average adventure. Before the advent of computer games, small boys used to play pirates with each other and dress up in funny clothes. Monkey Island lets you fulfil the childhood dream.

And a long, involving, enjoyable time is to be had by the aspiring Guybrush Threepwood (the name of the character you control). Just making it to the ranks of pirate consumes a fair part of the plot. You'll be Yo Ho Hoing and bottle of rumming throughout.

Consider this question though, is £16.99 the sort of price that you could consider as budget (especially since at this price, it doesn't even qualify for the budget chart, according to ELSPA rules) when the original price of over two years ago was £25.99?

As good a place as any to mention the funky soundtracks. They've been surpassed by today's efforts but still sound pretty good. Oh, and 10% off for silly and aggressive marketing.

The plot is way above the standard of an average adventure. Before the advent of computer games, small boys used to play pirates with each other and dress up in funny clothes. Monkey Island lets you fulfil the childhood dream.