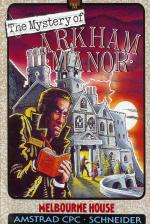 A few months ago we had a preview of Melbourne House's latest adventure - The Mystery Of Arkham Manor. Well, now we have the real thing. Melbourne's adventures often break new ground and this is no exception. It is an ambitious program with moving graphics and everything controlled using a system of pull-down menus. This alone is nothing new, but add other features of the game and if they all work smoothly, they could have a winning system.

The inlay calls Arkham Manor a detective thriller. You stand in the shoes of a newshound of the 1920s, working as a freelance reporter for The London Chronicle (published daily and costing just one penny - an old penny too, none of your decimal rubbish). The paper has had a letter from one of its regular contributors about peculiar happenings in a country village called Arkham. Normally the paper takes such letters with a pinch of salt and files them - but as the writer of this one is well known to the paper, they decided to take it seriously. You arrive in Arkham knowing no more than the above, it is up to you to ferret around and produce the scoop that has yet to be unveiled. The Chronicle is leading the way with its new fangled photography machine. This is a portable plate camera that is now issued to their top reporters and comes complete with three reusable plates. Due to its bulk it cannot be used above head height - so look for low to middle level clues.

The screen has a number of windows. At the top is the graphics window, displaying the location you are in, together with an animated picture of you and anyone else present. To the right of this is the command window that lists the options available: Move, get, drop, say, examine, use, give, read, camera. report, notebook and system. The cursor keys will control a highlight bar, that is moved over the options required. Pressing the spacebar will implement the option selected and call down an additional command window if needed. EXAMINE will display objects at a location that can be examined and MOVE will highlight the direction arrows displayed at the bottom of the screen - the appropriate cursor key will then move you in that direction.

Objects that may be picked up are shown graphically just below the graphics window. Beneath these icons are the three camera plates showing the photographs you have taken. Beneath these again is today's date. To the right is the information window that displays the responses to input commands, any other pertinent events and also any speech you enter via the SAY command.

Finally at the bottom of the screen are the arrows showing possible directions of movement and also a moving sun/moon depicting the passing of time. This may all sound rather complicated but the layout is logical and easily understood.

The game is in two parts: A saved position is necessary to enter the second - and of course you must be sure you have learnt all there is to learn from the first. There are more than 50 locations in the first part and each of these must be investigated thoroughly. There are a number of people to interview and the passing of time also plays its part. The local inn locks up at night, so don't expect to find a bed after closing time. Objects to be found will vary as time passes, so expect a long investigation as you first determine what and who is going to appear - not only where, but when.

Most of the command options are self explanatory, but some are unique to this adventure. Choosing CAMERA produces a small square cursor that can be moved across almost the whole width of the graphics screen from knee to shoulder height. Pressing the spacebar will capture a somewhat larger picture than represented by the cursor, and place it in one of the photo frames below.

REPORT provides a full screen window on which you can create a story for the newspaper - for which you get paid. You may create headlines, text and incorporate any photos you may have taken. When you are in the local telegraph office you can use REPORT to send a telegram to request information from the Chronicle files on people or places.

NOTEBOOK provides four pages on which you can make notes of your investigation. These appear as a window to the left of the information panel.

Check your notebook when you start playing for any notes you have already written. These can be saved to cassette independently of the normal "save game" facility. Notes and REPORT stories can also be printed out on an Epson compatible printer. SYSTEM simply offers you the options of SAVE/LOAD a game position or to quit and start again. EXAMINE, in addition to letting you examine objects at a location, also has a STATUS option. This pulls down yet another window that graphically depicts the money you have left, the knowledge you have gained - and the state of your sanity.

Descriptions of your location are entirely graphical, so it is important to EXAMINE at every location.

This will draw your attention to any specific features - they may, or may not, be significant.

This is a very ambitious program, offering a range of actions that few other games previously attempted. The mystery itself is not easy to solve as there are so many variables. But apart from the difficulty of learning what is happening where and when, there are also some problems in interacting with the game. For a program that is trying to eliminate the keyboard, it is surprising that there is no joystick option.

Using the cursor keys and spacebar is a reasonable alternative, but their operation is not as smooth as it might be. Obviously the program is quietly chugging away to itself while you are thinking what to do next. Time is passing, characters are moving and various actions out of your sight are taking place. In between performing these actions the command window also has to be scanned to see if you want to do anything.

This multi-tasking means that the program may be doing something else at the moment you ask it to perform an action. Often you will have to press a key several times to get the cursor to move. This is not a major problem, but it does become very frustrating after a while.

Select SAY and you have to enter what is to be said into the information window; The letters you have keyed in may not appear, so you may find you have typed incomplete words.

Or, as the keyboard repeat timing has been altered, you may find things have been accepted a little too well and instead of one letter you have two. Either way you now have to delete back to the error and type the rest in again. The delete key works in the same manner - it may or may not work first time.

Communicating with the characters you meet would appear to be important, but is a very time consuming and frustrating business. Needless to say, the responses you get are keyed to your questions - quite rightly too - but hitting the right question or key word seems a little difficult. The barman in the village inn is said to be a talkative fellow, all I can say is that he must have been suffering from laryngitis while I was there.

Your aim in the first part is to find a way of getting past the invisible barrier that prevents you entering the grounds of Arkham Manor. After that your guess is as good as mine. The concept and story line for this program are excellent. The marks I have given it reflect my frustration with the inadequate (or over-ambitious) programming - which I feel must eventually affect the player's level of addiction.

The concept and story line for this program are excellent.