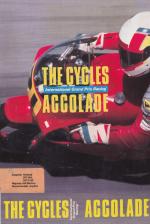 Pull back the throttle on 500cc's of raw power as you race towards the chequered flag. 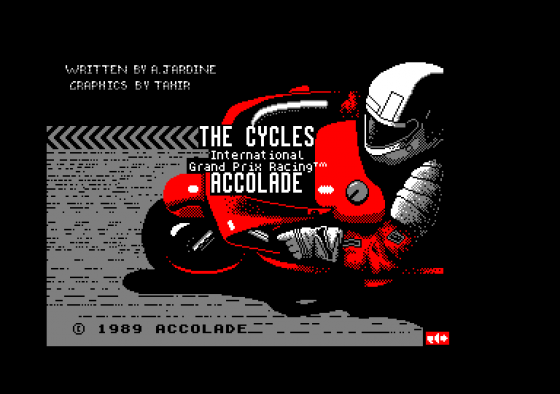 Tearing around the last bend for the home straight, it's a head on battle with last year's Grand Prix Champion Kevin Krauser. Turning your head just enough to catch a glimpse of his shocking yellow racing colours, you see a small puff of smoke as his back tyre momentarily loses grip on the greasy tarmac.

It's not much, but it's the only chance you've had throughout this gruelling challenge in the blazing Australian heat, and you've got to make it tell.

You straighten up, kick down into sixth gear, and pull the throttle back on 500 watercooled cc's of raw power. G forces threaten to leave you behind as your supercharged cycle makes for the chequered flag and as the black and whites come fluttering down before your eyes you chance a look behind you to see Krauser cursing his luck in your wake. The Philip Island title is yours, along with valuable points to prop up your first place position in the championship ratings. 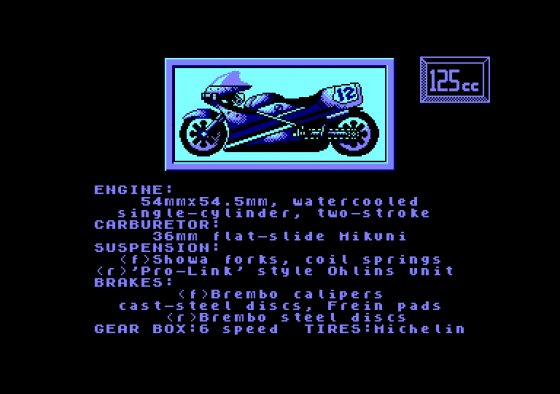 First place on the long and treacherous Japanese Suzuka circuit followed by your brilliant performance in Australia has given you a wonderful start to the season, but there is still a long way to go and five more races before the championship is decided. Next stop is the Laguna Sega circuit in California, with its long straights and the chance to burn some serious rubber. Then it's off to Spain and the winding Circuito de Jerez, followed by the fast Misano track in Italy.

Good performances in these opening rounds and the sharp hairpins of the French Bugatti circuit will see you coming home to Donington Park in an unassailable position to delight the crowds with your racing skills. With the final challenge on Sweden's Scandinavian Raceway a mere formality, you can drown in the glory of the shaken champagne magnums.

The Cycles is all about the power and the glory. As you struggle through the seven races on offer in the championship competition, you get to know all your opponents' strengths and weaknesses. Keep a sharp eye on the track and your revs up and they'll have difficulty in keeping up but, if you miss a comer and leave the road, they are right there to punish you and leave you floundering in the dust. 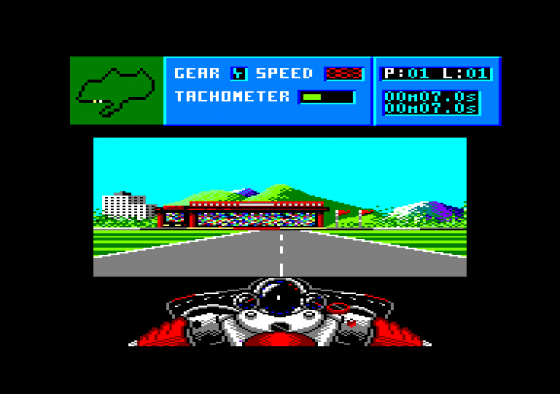 As you start your career as a title hopeful, there are five levels of difficulty to choose from. For novices, gear changes are automatic and help you to glide through the sharpest of corners with power enough to pull out into the straights. As you progress with your skills, you can opt to takeover with the gears but be careful, you can only change up or down if you're accelerating or decelerating by hitting the fire button. Try to change gear while the joystick is in neutral, as it were, and you will lose valuable time.

The normal length of a championship race is three laps, but if you prefer a sudden death or an endurance trial you have the option of changing the distance to your liking. Well, it's nice to stack the odds a little higher in your favour, isn't it?

For more sedate players, there is also a single race option to avoid the hurley-burley of the championship and you can get in a spot of training on the practice tracks to improve your tactics.

Another nice touch is the choice of racing machines, ranging from a wiry 125cc engine, through the 250cc specials to the heavyweight 500cc monsters, burning up roadspace at terrifying speeds and giving a little extra weight on cornering.

Graphically, The Cycles is excellent as you view the track from the rider's eyes. The track scrolls relatively smoothly towards you and the grandstand scenery is impressive. The game is one of concentration as you try to stay on the road which means the continuous motorcycle revving sonix, which can be a little monotonous, do not detract from the enjoyment of the game. You can even play with the sound off as the rev counter will tell you when you need to change gear.

Handling the bikes will take a little getting used to, as they are extremely sensitive to the joystick controls. If you leave the track, don't over-rectify or you'll find yourself on the grass on the other side of the track as your opponents take adventure of your plight. Using the cursor keys will give you a little more control until you get into the swing of things.

With the personalised nature of the Grand Prix circuit, The Cycles is a game which will keep you coming back as you try to outdo your rivals and you'll certainly get to love to hate the regular circuit winners thrown up by the computer. The championship is yours for the taking.

With the personalised nature of the Grand Prix circuit, The Cycles is a game which will keep you coming back as you try to outdo your rivals. 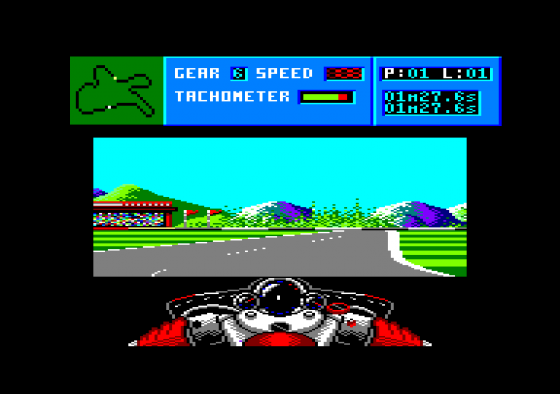