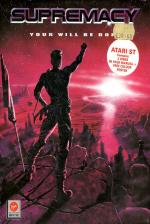 When you get a decent God game - like Populous, Millennium 2.2 or Sim City - it isn't just average, it's a bloody smash. Get the formula right and the game is easy to get into but still offers enough variation to keep you playing through the whole night. Supremacy has been in development for a staggering 18 months, but does it match the classics? Mark Higham plays it to death from his safe seat in the heavens...

Who can pass up the opportunity to take control of the Universe? We've all watched as world leaders have made a complete mess of the planet, raping the forests, over-taxing the people and then taking the first steps towards other planets. Supremacy gives you the opportunity to stop playing follow-my-leader and start acting under your own initiative.

At the start of Supremacy, you have a single planet with no way of supporting life. The objective is to establish a colony on the planet, watch as the people develop and then begin to build yourself an army. The game is played against a computer-controlled opponent - any of four alien life forms. With your armed force you can begin to colonise new players and take over planets already controlled by the enemy.

As the game advances the enemy begin to attack your planets and you need to build up a strong enough army not only to fend them off but also to attack them. If you succeed in taking over all the alien planets you proceed to the next planetary system, where you take on another opponent.

Supremacy is played using a series of icons which guide you around the game. With these icons you can raise or lower taxes, to encourage people to breed on the planet, and buy horticulture and mining stations to equip your people with food and fuel. Each planet is only capable of supporting up to 30,000 people, so when you reach this limit it's time to move on.

Strategy games in this vein don't have the scope for exciting visuals - that's a common view, proved completely untrue by Supremacy. Stunning visuals and heaps of useless but magnificently atmosphere-setting animation all contribute enormously to the excitement of the game.

Icons showing the planet type are animated to show you whether the planet is best suited to generating food or minerals, and lively animated icons in the troops section show your troops in training and in battle. When you lose a game you're thrown into prison and then treated to a sequence in which your opponent bites your head off - all in the best possible taste!

Sound effects can be switched on or off from the main screen. Sparse sampled effects and speech keep you informed of alien attack and confirm your buying decisions.

Supremacy bears a very close resemblance to Activision's Millennium 2.2. The difference is that Supremacy wows you far more than Millennium could ever have done. Wonderful visuals and an impressive user interface make the game far more exciting to look at.

Millennium was, however, a much bigger game: instead of simply colonising new planets, you had to face much bigger problems such as viruses or rebellious planets. This is where Supremacy fails. You have disasters to face such as nuclear explosions wiping out the entire inhabitants of a planet or storms knocking out your food or mining stations, but these problems just aren't on the same scale as those in Millennium. When you've been playing the game for a long time you start wishing there was much more you could do to improve the state of your planet.

Perhaps more seriously still, moving people, food or mining stations from Starbase to one of your new planets is ridiculously complicated. First you must move the cargo into the docking bay, fuel and crew the station and then send it into orbit. You next need to send it on its way to your new planet and put it into the docking bay, only to remove it from the docking bay, install the cargo on the planet surface and activate it. So many different screens must be accessed to perform what is essentially a simple task that you wish you had some sort of automatic system for carrying out the process.

In these respects Supremacy could have been much better - but that isn't to say it's not already a wonderful game. The momentum is ideal: it starts off slowly, giving you a chance to colonise Starbase and build yourself a strong military force, but once you begin to colonise new planets the action speeds up as more and more people make demands on your resources and the enemy gets ever closer.

It's the sort of challenge you pick up early one evening with the intention of playing for a quick hour and then suddenly you realise it's 4am, you've had nothing to eat and you've got to be up early for work... but instead of switching off your ST and going to bed you decide you might just as well carry on playing.

A wonderful game... The momentum is ideal: it starts off slowly, but once you begin to colonise new planets the action speeds up as more and more people make demands on your resources and the enemy gets ever closer.