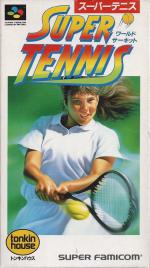 Fancy yourself as a bit of a Becker? Or perhaps the top-ranked super skills of Steffi Graf are more your style. This latest Super Famicom cart enables couch potato armchair athletes to participate in the sport where grunting loudly in a very upsetting manner is every bit as important as winning the points.

Super Tennis provides you with every manner of tennis court known to man, along with cute players, ball boys and umpires, along with computerised opposition (if you're playing in one-player mode). Also included are digital representations of the top players in the tennis world, so look out for the likes of Obekka, Lendou and Guraffe (no prizes for guessing the names of their real life counterparts). Plenty of lesser players are also included, some of whom only appear in the Grand Slam tournaments.

With the aid of an excellent control method, just about every kind of shot is possible in Super Tennis. It's down to you to master it!

Each of the control pad's four buttons produces a different shot in Super Tennis. Choose a shot in conjunction with the directional pad and you alter the ball's trajectory. Included in the shot line-up are the likes of lobs, slicing stun shots, straightforward returns and top-spin shots.

Pressing SELECT before one of the players serves gives you the in-game stats, which provides you with a detailed breakdown of each player, Wimbledon-style. Also present are some more interesting figures like how many aces you've served in the game. This screen also appears at the end of each set.

One of the many options in Super Tennis is the doubles mode, which puts four players on the court ready to battle it out. The rules remain much the same, escape that the whole court can be used in play, including the two strips on either side of the court.

Selecting the World Circuit option at the beginning of the game enables you to complete in just about every major tennis championship in the world, including the US Open and everyone's favourite, Wimbledon.

Play is much the same as in the straight one-player mode, except that a wider variety of courts are used. There aren't any doubles matches either to clutter things up.

With its intuitive controls, fast action and utterly realistic gameplay, Super Tennis is the finest simulation of the sport ever produced. It's got great graphics and sound (the caricatures are brilliant - my fave's Wagassi), but it's the sheeer pace and playability that makes this a classic sports game.

It's horribly addictive in one-player mode, and for two-player thrills and spills it ranks alongside Kick Off 2, John Madden's and ice hockey as one of the best.

It caused the entire office to grind to a standstill, with constant challenges being issued and grudge matches being played (even now, as I write this I can hear Rich cussing his head off with frustration because he's getting his monkey ass busted by Gary).

I don't think I need to tell you this, but I will anyway - if you're a Super Famicom owner, get it.

Super Tennis looks and plays very much like Final Match Tennis on the PC Engine, which is no bad thing as that was the best tennis games ever. I say "was" because Super Tennis is vastly superior in a number of aspects. First of all, the Famicom's 3D chip is used to good effect to give a brilliant tennis court that features stunning scrolling.

Add in the myriad of extra options and you've got the greatest tennis sim ever. The vast amount of players to choose from is also a welcome addition and the two-player option also adds an extra special ingredient.

Serving an ace to the outrage of your "pal" has a particularly satisfactory feeling, especially if it's Gary Harrod you're playing (ha!). The icing on the cake is the exclamations the players make. After winning an arduous rally, players scream "yeah!", but if they muck it up they say something a bit ruder... Super Tennis is yet another essential buy for the Super Famicom, and ranks highly in a league featuring all the classics, including John Madden Football, Kick Off and EA Ice Hockey.

Presentation 92%
No Japanese text whatsoever, but loads of options to tweak, right down to the ball colour!

Sound 93%
Superb on-court samples and some speech courtesy of the umpire.

Playability 95%
You'll be instantly addicted to the mega-realistic action...

Lastability 93%
...and the two-player option, coupled with the vast amount of players to choose from make this a long-lasting classic.