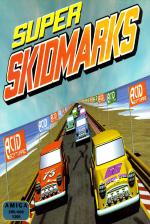 Super Skidmarks | Slew | Hoy | Screech! | We'll Be Right Back After This Break | The Bottom Line 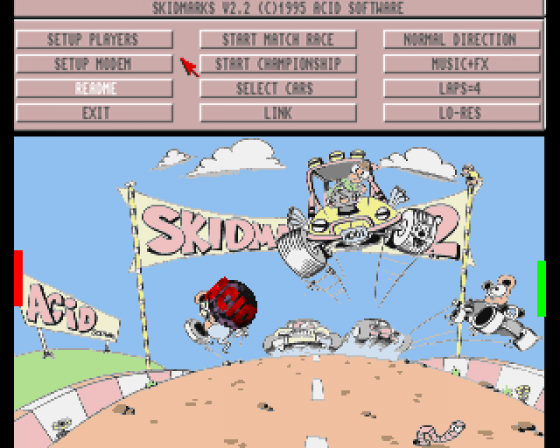 More fun than you can shake a gear stick at.

Honda Pilots are nifty little off-road go-karts with tubular steel roll frames and odd hands-only controls. They're loud, they're muddy and they go round corners in exactly the same slippery-sideways-slidey way that cars in Super Skidmarks negotiate tight bends. Honda Pilots are better than a 15-storey tower of chocolate digestives.

The trick of cornering them (and, of course, cars in Super Skidmarks) is to point the nose of the buggy towards the apex and put the power on, so you slide through the corner. This kind of rally handling was rather limply attempted in US Gold's Power Drive (AP45, 61%) but is recreated pretty dashed effectively here. Super Skidmarks may not be as good as Honda Pilots, but its benefits are numerous. It's cheaper, ecologically sound, and you'll never, for example, get shouted at by irate farmers for chewing up their recently planted fields of spring barley. Super Skidmarks is at least as good as a malt loaf the size of a house. 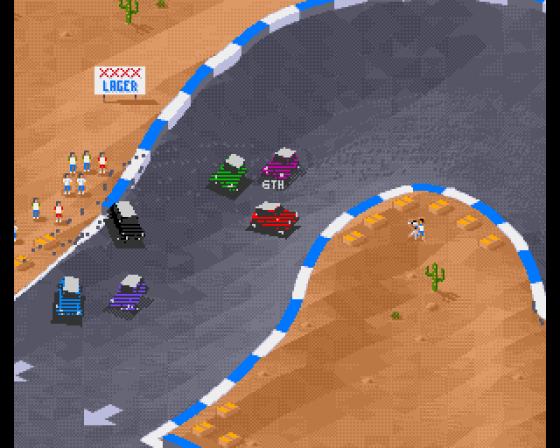 Gnhff, but hang on a minute, another racing game? There's nothing new about the idea, and in fact there are few things immediately different from the original Skidmarks game (AP34, 78%) but yet we've been slavering at the prospect of getting hold of it. Why? Because it's a very, very, very special racing game.

The specialness has much to do with the track, which is constructed using quadratic B-spline curve mathematics. Acid did their best to explain this in the first game and receiving nothing but scorn and ridicule from the technophobic luddite rabble that forms Amiga Power, so they've kept quiet about it this time, but what it means is that all the bumps, pits, ramps and curves of the track affect the cars as they travel over them. After playing Team 17's still-born overhead racer ATR this month, seeing a car take off over a ramp or bounce into a hole is tremendously invigorating, and has restored my faith in the Amiga as a top games machine.

The cars themselves are also supremely special, having been light-sourced and then rendered so you get glints of light off the windscreen and can make out all kinds of tiny details. Check out the pictures and be impressed, even though our screenshot technology isn't too good at this sort of fiddly detail. What we can't get across in the magazine is the great way the cars handle, sliding and waving and even doing pointless but fun aerial stunts on the ramps. If you're crap at games, or simply on Prozac, you can race at a stupidly slow pace, and if you're one of those ridiculously good players, the speed goes right up to unplayable (by mortals). Take my word for it, the cars drive perfectly and all options are catered for. 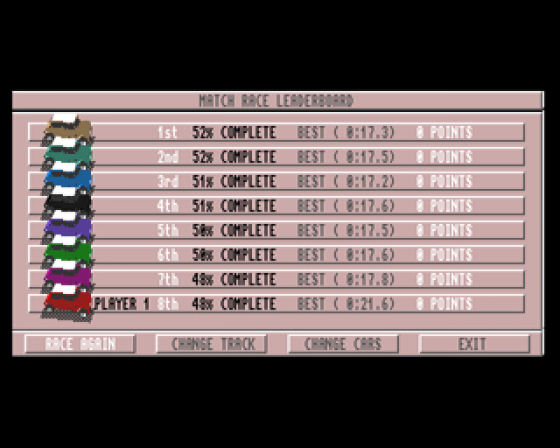 The courses, too, are indeed (and although I feel that I'm over-using the word, I can find none other that truly sums up my feelings) special. Even though they initially look samey, the curves and gradients of the game's 30+ tracks hide myriad different arrangements needing different tactics. Acid have learned from the mistakes of others and made all the circuits small, so you quickly learn the track, and never run out of opponents to hit. You'll run into the tail enders when you're ahead and the leaders when you're trailing.

Why all the effort to keep the cars together? Well, because Super Skidmarks is all about bashing into other cars, and from the start, the only way forward is to crash through the pack and inflict well-timed impacts to send opponents into walls, leaving them trailing by seconds.

It's easy to work out the line each car is taking and to block them, and getting the right line on corners can sling you into the lead. If you're struck directly from behind you'll get a huge speed boost although whether this is a pain or a prize depends on whether or not you're on a straight. 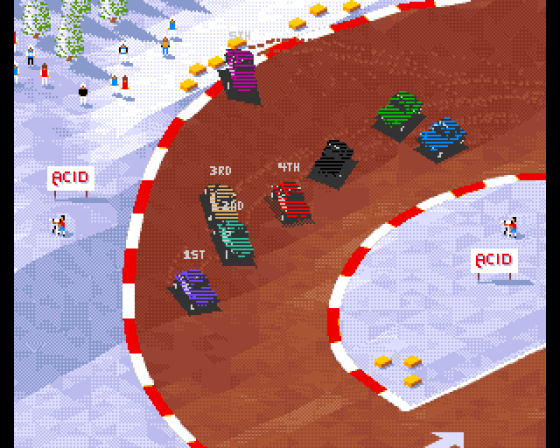 Acid have been keen to point out the difficulties of making computers drive cars, which probably explains why Super Skidmarks is at its best as a playground for numerous humans and at its worst when it's just you versus the system. The one-player game highlights how much each computer car behaves like all the otehrs, although to be fair, they do err much more than cars in other driving games, and can quite easily be forced to do something disastrous. The more real players though, the merrier, as your unpredictable paths conspire to mess up the paths of the computer. If it's just you, the sinister computer pack slides along bumper to bumper, leaving you to chug along.

But hey, what kind of saddo plays driving games on their own anyway? Super Skidmarks is all about playing against your mates, and it's here that it excels and also (quite fortunately) that the computer car/unfair overtaking effect is at its most minimal. On a standard Amiga, you play with a split-screen mode for two players and a full screen for three or four players, where you can use either keys, or a joystick adaptor in the parallel port - good call Acid. There's the serial link option too, but on a single machine, the four-player game is similar to Micro Machines, where the players knocked off the edge of the screen are reinstated just behind the leader after having a point docked off. I'm not really a fan of this idea, but although it's my lease favourite section of the game, it works because of the human element.

There's plenty to recommend the game to all Amiga owners, but A1200 owners have an extra special treat waiting for them. Standard Amiga owners are going to huff and puff at this, but, like Binary Asylum's Zeewolf, I'm sure this was written with the A1200 in mind. Unlike Zeewolf (which runs terribly slowly on A500s and A600s), Super Skidmarks runs at the same speed on both, but you're offered a multitude of new options on the A1200, and they're all included in the standard version instead of stuck away in a rip-off, more expensive A1200 version. Once again, kudos to Acid. 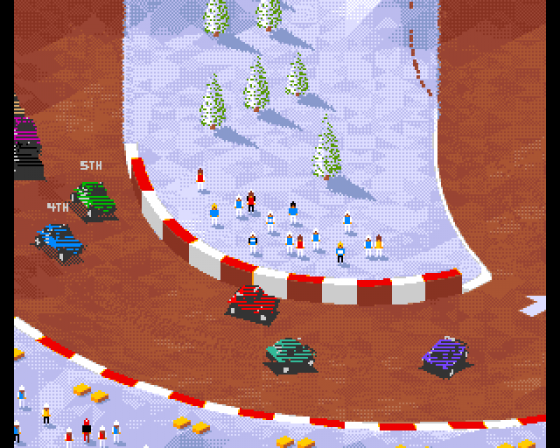 The massive difference is that the A1200 can handle eight vehicles, which means that the thin tracks appear just that bit thinner, the intersections a bit more frantic and the starts even more intense. The next major addition is the high-res mode which makes everything smaller, and therefore lets you see more of the track. Once we'd stopped marvelling at the huge graphics of the normal game, this is the mode we stuck with, it makes racing much easier by letting you see the corners sooner.

Finally, and this is what elevates the game to near divine status, there's the widescreen link mode. You need two computers and a null modem cable for this, but only one version of the game, and it splits the entire course over two monitors, allowing you to see all the track, all the time.

This means - deep breath - that you and your friend, and their friend and their sister, and her mate and her brother and his mate and his dad can all play Super Skidmarks at the same time. Yes, eight players and yes, it is truly fantastic. The game is thus a landmark in game history. It's a classic and it's a great shame that only the small section of people with access to two A1200s can play it. 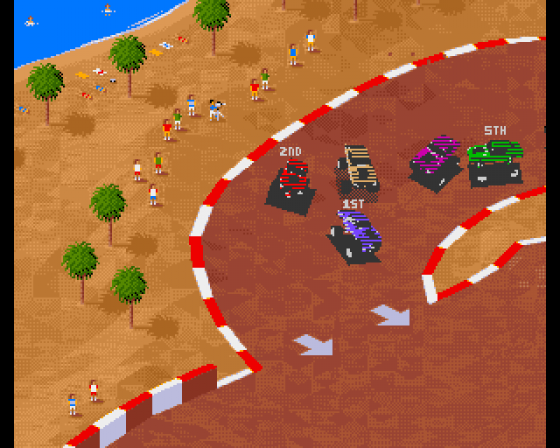 So phew, we've actually got a great game in this month. Move over F1, take a hike F1GP and get your flaccid, runty little bod out of town ATR. Super Skidmarks rules, because it's great, because it's imaginative, but most of all, because we say so.

Super Skidmarks comes on seven (count 'em) disks. There's a boot disk, four track disks and two car disks, and a track change means one disk swap, a car and track change means two. It's quite slow on a standard machine, but extremely zippy on an A1200, and there isn't any of that annoying disk shuffling you often get.

Anyway, you can put all the data onto a hard drive and there's a great Pong game to play while you wait. With spin and everything. Marvellous.

Uppers: Fantastic, handling, superb graphics, great tracks and suitably screechy sound effects. The tracks are contoured and get muddier the more you race on them, you can race round in either direction, there's a serial link mode and a points system I've not even mentioned. The difficulty range is huge and most of the data's hard drive installable. Also, Pong.

Downers: The one-player game wears a little thin after a few hours, and there's the predictable but frequent disk swapping (if you don't have a hard drive).

Were I washed up on a desert island with a small selection of computer games, I'd be hard pushed to choose between this and Micro Machines. Truly, Super Skidmarks is one of the finest Amiga games around.

As for the AGA version, it's almost another game entirely. The high-res mode is the Mode of Champions, eight cars on the track make for frantic bumper-bouts, the disk accessing's at least 50% faster and the cinerama mode deserves a Nobel prize. Unmissable.

Super Skidmarks | Slew | Hoy | Screech! | We'll Be Right Back After This Break | The Bottom Line

One of the finest Amiga games around. 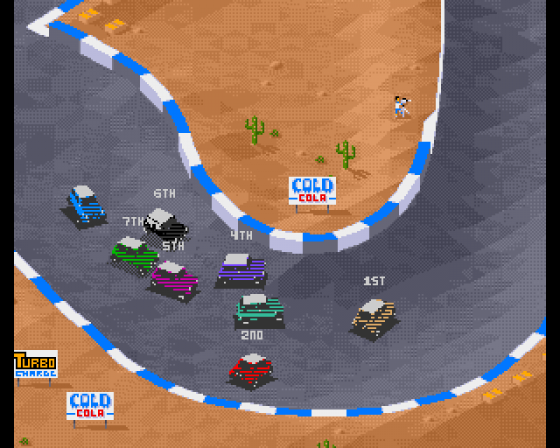 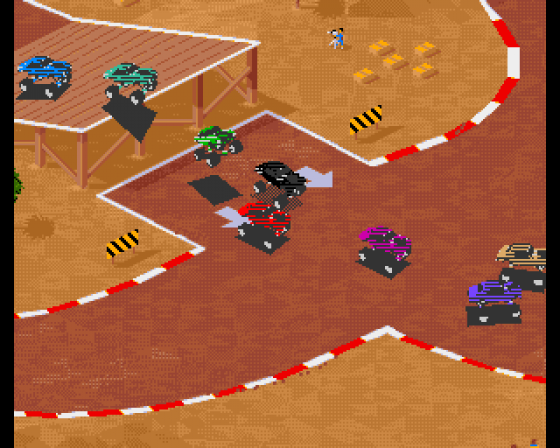 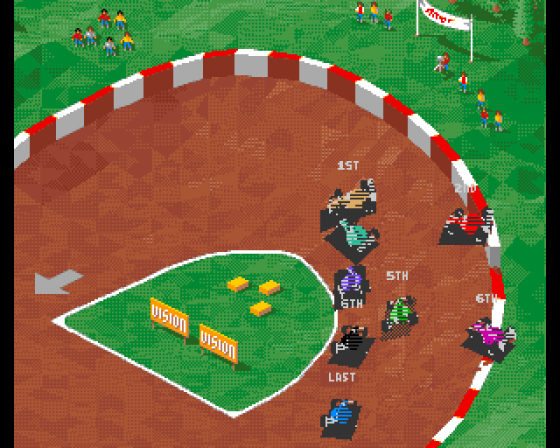 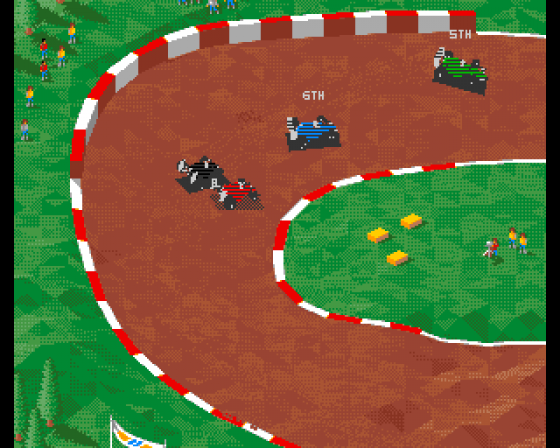