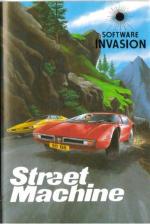 Most of us will never own an exciting sports car and can only dream about the joys of flinging an engine jampacked with horses around tight curves at great speed. That was until Software Invasion hit the scene with their new car driving game, Street Machine.

There are two schools of thought as to the best way to represent the motion of your mean motor. There is the out of the front window 3D view brigade. This allows the authors to indulge their graphic whims but usually to the general detriment of the game itself.

Then there is the Flatland approach which foregoes one of Einstein's dimensions but is a damn sight easier to program and hopefully allows more time to be devoted to the development of the gameplay.

It is this second approach that is used in Street Machine. Your little red sports car, seen from the sky, is kept pretty central on the screen while the world moves around it.

To move the 16k of Arnold's screen memory at the speed that is achieved is quite an achievement. It relies on the whole screen being moved so that hardware scrolling can be used. Because of this nothing in the way of status or score is shown on the screen.

The game seems to take ages to load, probably because it uses so many separate small files. While loading a screen gives absolutely nothing away about the great graphics that are to follow.

Once loaded, an eight score high table is shown on which it is possible to pick a number between one and eight in order to choose which entry you would like to try and set. As soon as this choice is made the screen changes to show your car waiting on the line ready for the off.

The aim is to get round the track as quickly as possible. There are other cars on the track which you can try and keep up with and perhaps even overtake, but this doesn't seem to score you more at the end of the day and their presence is more likely just to spook you into trying too hard and making a mistake.

The map is quite large considering the amount of memory available. The inlay suggests that it is equivalent to about three miles on a full scale circuit and this would seem to be a pretty fair estimation. The circuit never changes, but if anything this is a good thing because it takes quite a long time to become familiar with the whole circuit - obviously a great advantage when you are haring round trying to get the best time possible.

Control can be by either keyboard or joystick though, as always, the latter is infi nitely preferable. Left and right steer the car left and right, moving the joystick forward is your welly control while pressing the fire button will hopefully slam on the anchors.

If your foot was on the floor then it's curtains and back to square one. However, if you managed to brake enough the car will not be completely written off but instead you get a chance to fix the damaged bits.

The screen changes to Mode 2 from the colourful Mode 0 in which the main game is played and a display of about 70 (yes seventy!) car parts are shown. Each is followed by a percentage which is the amount of damage that part has, In the sixty seconds that count down on the clock you must move a highlighting cursor to any that are severely damaged.

As the cursor sits on a particular part name its damage count goes down at the same rate as the 1/100ths counter of the clock. Any vital part must have less than 79 per cent damage at the end of the minute or the game will end. Some parts, such as the windscreen are not vital and so it doesn't matter if they still have more damage at the end. Assuming you manage to get enough fixed in the time, control returns to the main game for you to continue the lap - otherwise it's goodbye Vienna.

A whole minute added to your lap time each time you have a little knock soon persuades you to drive a little more carefully even if it does mean going a little slower.

If you make it to the end of lap one its back to the start for more of the same, but this time it's after dark and a nasty thunderstorm has hit town. Now, as all careful drivers will know, when it rains handling gets a little more tricky. Actually with practice this is more fun than the relatively boring dry roads.

Now it is quite possible to swing the car right round a hairpin by just applying a bit of brake and pulling a really tight turn. Handling is in fact very realistic, so if you start to lose the back end the worst thing to do is apply the brakes. A much better idea is to hit the floor and drive out of the skid. At first this inevitably proves fatal but with practice it gets quite easy.

And practice is certainly what you will need if you make it to lap three, because this time there has been a heavy fall of snow and the roads have become decidedly icy. There is no point in trying to fly round at full tilt, you just wouldn't make it past the first bend.

So chug round at a sort of medium speed and remember to turn into a bend about 50 yards before you get to it. That way the back end will just about be responding by the time you get to the centre of the bend.

The Maser and Lotus on the cover hide the fact that this game has about as much to do with racing flash cars as a Reliant Robin has with rally cross.

In your flatland you have the road almost to yourself I'd sack the town planner who built three miles of road for four cars - but then you aren't asked to believe, just play the game. And it's really jolly good, takes a bit of getting used to, though waiting for the car repairs to be finished are almost as much of a pain as the real thing.

If you've played Super Sprint in the arcades you'll have loved it - if you didn't then there is something wrong with you, 'tis the hottest game for quite a while.

Unfortunately, despite the mass of mechanical work which can be done to repair your machine, nothing can be done to improve it beyond showroom standard.

Many of the techniques are the same, slide into corners, wait 'till the nose is pointing at a straight and then hit the loud pedal. A surprise from Software Invasion.

This game could very easily become habit-forming and has certainly entered my all-time top ten. The execution of the idea is masterly and is only slightly floored by the maintenance screen - after a while this gets a wee bit tedious and as soon as I can find the POKE this feature will be well and truly disabled so that I can get on with the driving.

The realism of handling on loose surfaces is one of the major factors that makes the game a joy to play. I don't know if the fixed map might become a bit of a drawback in the long term but I'm sure someone will come up with a way to edit the map before very long as this game should become a classic.

This is really jolly good, even if it does take a bit of getting used to... Waiting for the car repairs to be finished is almost as much of a pain as the real thing.