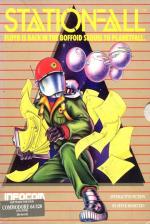 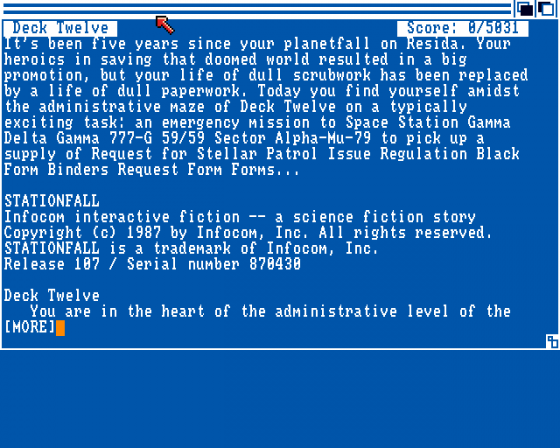 Floyd is back! Yes, that lovable, playful, and exasperating little companion, who thrilled thousands of adventurers in Planetfall, makes a welcome comeback in Steve Meretsky's sequel - Stationfall, the latest game from Infocom.

Now promoted from Ensign Seventh Class to Lieutenant First Class, you have been assigned to the Stellar Patrol's paperwork task force. And you have been given a top priority assignment: take a space truck out to Station Gamma Delta Gamma 777-G 58.89 to collect 24 pallets of Request For Stellar Patrol Issue Regulation Black Form Binders Request Form Forms.

Already armed with the necessary authorisation forms, you check in to the Robot Pool, to select an assistant. Will it be heavy duty Rex, the spindly robot called Helen, or the small fellow in bin 3? The latter is Floyd, of course, and if you are callous enough to choose one of the others,he will give a little whimper whilst an oil-drop runs down his cheek... Enough to fill you with such remorse that you will immediately want to restart the game, and make amends! 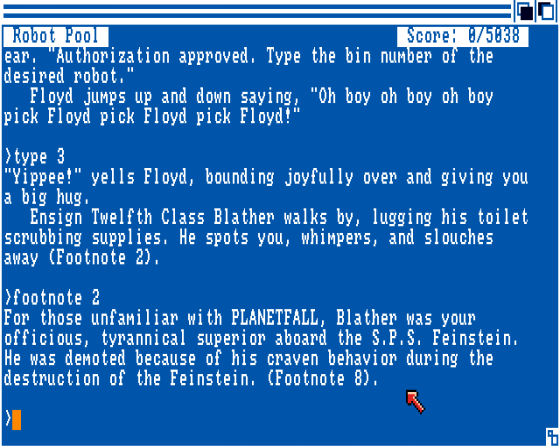 Soon you are space-borne, and after a short journey, your spacetruck docks at the space station. But as you alight your craft, you become aware that all is not well. The entire station, whose sole function is the production, collation and recycling of forms for the Stellar Patrol, seems strangely deserted. So does the hotch-potch of moored and interconnected craft making up an unofficial 'village' attached to the station.

Strange noises emanate from the lower levels of Gamma Delta Gamma and soon you discover that they have recently been sealed off from the rest of the structure - from the other side. And it is those levels which house the all-important life-support systems, and computer control.

Heading for the Commander's quarters, you find his log. It makes very uneasy reading. It had been discovered that villagers were stealing the station's fuel cells to power craft for joy riding. The missing Commander therefore decided to lock up the remaining cells, and put the key in his safe. Next, Shady Dan from the village, was caught forging ID cards; then a whole batch of village access authorisation forms were illegally validated - so the captain hid the form validation stamp. 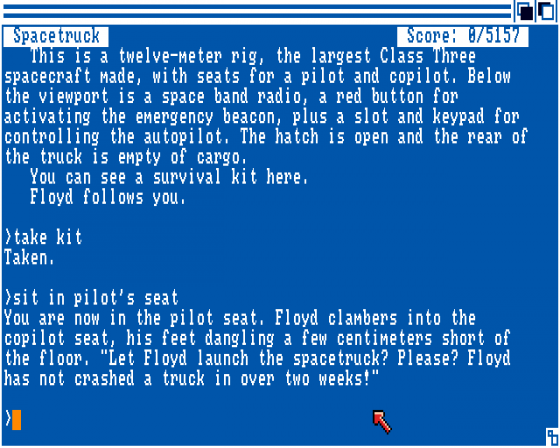 Meanwhile, an inidentified space ship was discovered heading for the station. On interception, it was towed in to the station, and proved to house the skeleton of a dead alien, and a mysterious pyramid. Nothing more of note was observed, save some strange black dots on the inner walls of the hull. The pyramid was taken to the Science sub-module, where it was put in the biological holding tank, whilst Professor Schmidt analysed the flight path of the vessel, in an attempt to trace its origin.

Not long after this, machinery started malfunctioning. First, the No. 22 forms collator broke down, quickly followed by web-feeder No. 17. And now, it seems, the automatic welders are behaving strangely. In their search for leaks from the hull, is it a coincidence that they frequently head towards you...?

An examination of the monitor screens in station control, reveals that food production is at condition red, and printing at condition yellow. A continued watch on the monitors shows that all systems are deteriorating fast - except the control computer, which maintains a healthy green condition. Perhaps you chould activate the distress beacon on the station now, while you can, or if the power is insufficient, the beacon on your own space truck? 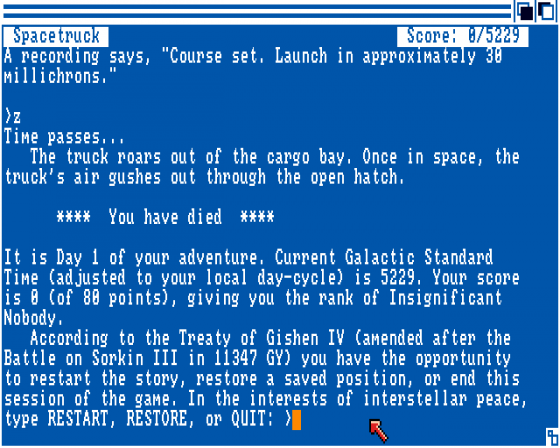 With the plans of all nine levels of the station (included in the packaging) spread out beside me, I started to methodically explore the whole structure, from the dome-top gardens, down to the printing plant. Who had been interfering with the nanofilm spools? Who had been tampering with the food dispensing units? What had been going on in the science module? Why were certain items of equipment missing, like the washing machine from the laundry, the computer terminal from the library?

A shiver crept up my spine. The tension that had built up was relieved only by the ubiquitous Floyd, and his newly found friend Plato. Plato, a native of the space station, lonely since he had noticed that there hadn't been anyone around for a while, had teamed up with us. Striking up an instant friendship with Floyd, when the constant chatter wasn't about such robotic subjects as the best way to recharge batteries, or how to solve seventh level differential equations, Plato would be seen deep in a book of poetry, whilst Floyd would be nagging for a game of Hider-and-Seeker.

If ever I typed SAVE, Floyd would bounce up and down excitedly. "Boy - are we going to do something exciting now?" he would ask in anticipation!

Floyd and Plato are currently awaiting the end of the incubation period for Oliver, a newly programmed robot, who lies unattended in the Robot Shop on Level 5, aware that the most frightening time in a robot's life is those first few lonely moments of consciousness. They like the look of Oliver, and his name, too, and have hopes for a great triumvirate. But when will he become live? And will he turn out to be friend or foe...?

There is something of both Level 9's Snowball, and of the film Alien, about Stationfall. The ominous welding machines are quite like those Nightingales but, thankfully, easier to avoid. And the mysteriously presence aboard the ship, has proved beyond doubt to have emanated from a far off galaxy. The strangely misshaped jaw of the skeleton gives the first clue to a most ingenious puzzle, which, when solved, reveals somethiing totally startling and rather repulsive about the aliens' biological functions...

I can honestly say that I don't think I have ever become so totally absorbed in any adventure game before! It became so real, so threatening, that I just played on and one, determined to reach the aliens and save myself and the station. More than I have experienced before, this was like taking part in a real thriller. There are plenty of laughs there, too, but they don't intrude on the excitement and suspense in any way.

Stationfall is highly addictive. I found myself getting up early in the morning, having had an overnight inspiration which I just had to test out! (The result left a very sweet taste in my mouth!) Just like a good book, I had to go back time and time again to the game. But unlike a book, this piece of fiction is interactive, and with perseverance I hope finally to discover the aliens' secret, and save Gamma Delta Gamma from its invaders - and that makes it much more exciting than any paperback - because it requires personal involvement.

Highly addictive. I found myself getting up early in the morning, having had an overnight inspiration which I just had to test out! Just like a good book, I had to go back time and time again to the game.