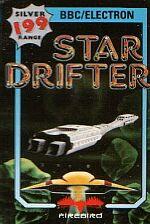 Another release from Firebird, this time an attempt to break into the graphic adventure market. The idea of the game is to explore a spaceship, room by room, and to find clues as to the mysterious appearance of the whole fleet. The actual layout of the screen is very similar to Sabre Wulf, and in fact the whole game follows the same pattern.

The main difference from Sabre Wulf is the ability to manipulate objects and carry them around. For instance, various keys are needed to pass through force fields scattered around the ship. Other objects like a radio, a gun (without which you cannot shoot monsters), and oxygenator unit are well defined on the screen.

Careful thinking is needed as only three objects can be carried at once. It is a tribute to the complexity of the game that it still needs to be mapped as there are 120 rooms in all.

The presentation of the game is up to Firebird's usual high standard. I found the game itself quite playable and even though it may not be quite so graphically stunning as other more expensive games, it is well worth buying in view of its low price.

Similar to the classic Sabre Wulf... It may not be quite so graphically stunning but it's well worth buying.