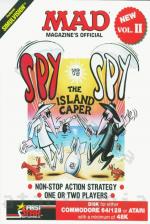 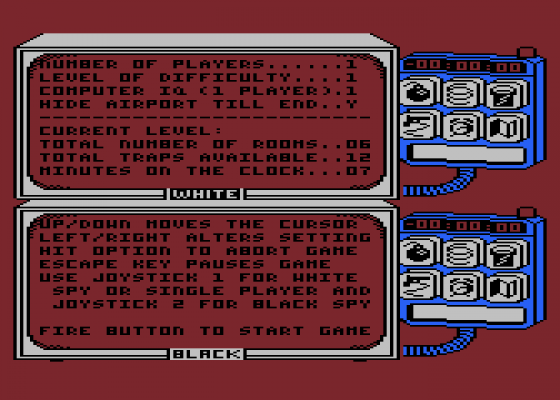 If you're a fan of Mad magazine you will undoubtedly know about the Spy Vs. Spy comic strip. For those of you who don't, the stories follow a deadly duel between two opposing spies, one dressed in black and the other in white.

After the success of the first Spy Vs. Spy computer game the spies have now returned to continue battle in Spy Vs. Spy II: The Island Caper.

The game boots up with an attractive title page. After a short pause a plane flies past shooting holes in the titles, then another follows in to destroy more of the picture. The pilots are the spies and, after wrecking the screen they fly off and the display changes to the main screen. 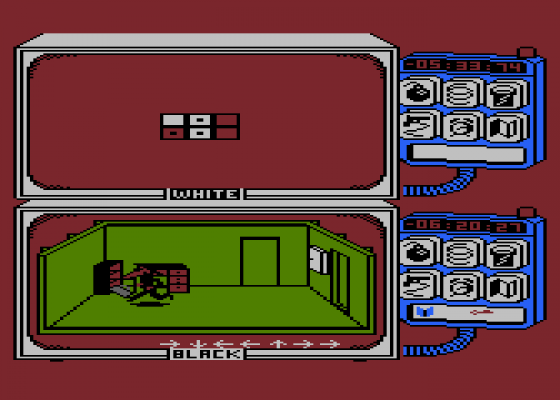 A big selling point with the Spy Vs. Spy games is the way in which they display the action. Star Software has designed a screen with two monitors connected to a main computer via ribbon cables.

The two monitors show the position of the spies - this is called simulvision. They also update in real time, and this is called simulplay. A monitor will display a 3D view of the landscape and you can move your spy away to the distance, towards you and left and right.

Moving to the edge of the screen forces more landscape to scroll on, and little gaps at the top and bottom of some screens allow access to the north and south of the island. 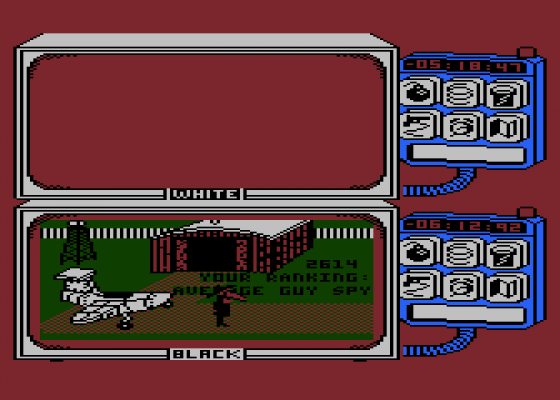 The object is to recover all three parts of a top secret missile. In the Mad fashion, this missile is not an Exocet or a Polaris, but an XJ4 1/4.

It has crashlanded on Spy Island and broken up into the three parts that you must retrieve and assemble. The island has only one resident, an active volcano which is about to erupt, so quick completion of your mission is essential.

The spies have been equipped with the latest spy technology, the Trapulator Model FSS 85. This technological gadget aids you in your fight for the missile. It shows what you have in your inventory and also allows you to access the equipment that you have acquired. 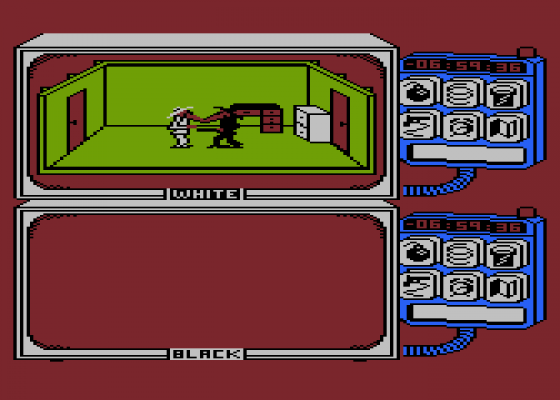 You have a good selection of devious weapons with which to trap or attack your foe - from napalm to a coconut gasoline bomb. You can also dig holes and put sharp sticks down them. This has a nasty effect on any spy unlucky enough to fall into a pit.

My favourite is the rope snare. You select the rope from the trapulator and climb up a tree tying one end to the tree top, you then stretch the other end to the ground.

Once the snare is set it becomes invisible, so you must remember where you set it. If a spy triggers off the snare, he will be lifted into the air and left dangling from the tree. 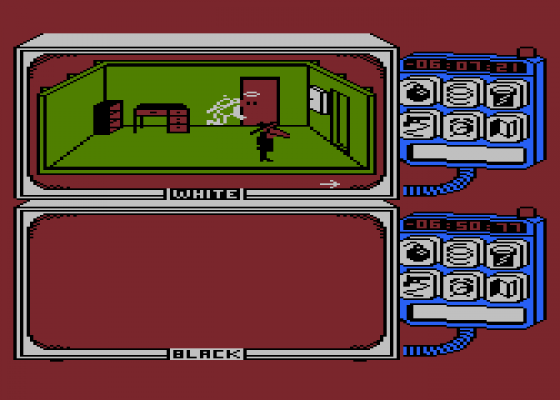 All of the traps deplete your strength and delay you for a few seconds, giving the other spy time to do more dirty work. If you want spy to spy combat then you must confront your enemy. When a spy enters the same area as his opponent the simulvision ends and all attention is switched to just one monitor.

You are also unable to access your trapulator while in combat range. You have two methods of attacking an enemy spy. You can either jab your opponent with a sword that appears when you enter combat mode, or smash him over the heada with the sword.

There are also natural hazards you need to look out for. The island has small areas of quicksand, which when stepped in can be hard to escape from. 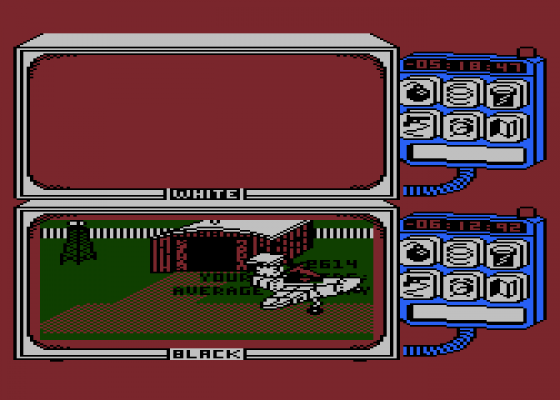 The sea looks nice for a quick dip but if you wander into deep waters you find the spies are poor swimmers and you will soon drown.

In these parts the sea is infested with hungry green-gilled mud sharks with an appetite for spies. The only need for venturing out to sea is for a player who has assembled the missile to find his off-shore submarine which will take him home.

The spy who achieves his goal first gets onto the submarine and a girl pops out of the hatch to give her hero a small kiss on the cheek. Finally, they both jump into the sub and dive deep James Bond style. Altogether I found Island Caper a great game especially in the two player mode, but the computer is very hard to beat.

To overcome this problem I just changed the computer's IQ level.

One pleasing feature was that the program could be played via the keyboard as well as joystick. You also have control over which level you wish to play. On two of the levels there are two islands, making the game longer and much more fun.

The only disappointment was one small bug which I found. I somehow managed to get a screen where a tree had been split in half and all the perspective went wrong - this only happened once in many hours of game playing, so it wasn't too bad.

Spy Vs. Spy II, is a well presented and complete game. It is slightly difficult for younger players to get to grips with but great value for money.

A well presented and complete game. It is slightly difficult for younger players to get to grips with but great value for money.