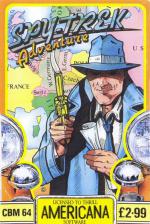 If atmosphere didn't count in an adventure game, then Peter Torrence would surely be among the foremost of adventure authors by now, given a bit of vocabulary. He was responsible for Firebird's Subsunk and Seabase Delta, and more recently Lost Apache Gold and Imagination. Now he comes up with Spy Trek Adventure, another cheapo but this time on the Americana label.

His problems range from the downright obvious to the niggling-but-solvable, all with a complete disregard for the atmosphere demanded by his subject. This tends to manifest itself in flippant replies like THANKS - BUT NO THANKS! If you try to take something you shouldn't, and in an obsession with food items used as non-edible adventure objects. In Subsunk, yoghurt and toast were required, in combination, to stick a map together. In Seabase Delta, the ingredients to make a pancake must be found for a pancake to be cooked - but once again the pancake is not for eating!

In Spy Trek, food makes an early appearance and goodness knows what is to come later in the game, perhaps a Biriani? You play Mike Rodot the spy, probably the cousin of that famous reporter Ed Lines. Mike joins this adventure in a horizontal position - inside a coffin. He is being transported unseen, by hearse, to the airport.

Waking too early, he half scares a passing motorist to death. The only way out is to take the pill he is carrying and sleep it off until he gets there. On his arrival he finds himself in a storeroom with some useful objects but no briefing on where to go next, and not even so much as a false passport to his name.

No spying mission was ever as unplanned as this, but therein, of course, lay some of the problems. Unfortunately, this approach does tend to destroy any atmosphere of reality which a good adventure needs to build up.

Eventually, Mike must board (or rather 'enter', for unforgivably the program doesn't recognise the word 'board') an aircraft, only to find his pilot is about to develop sudden blindness. The solution leads to Paris and the Eiffel Tower, the first of a number of worldwide locations in the adventure. Or so I'm told, for I never was able to progress beyond a loop of going up and down the tower once I got there.

There are graphics, but they are nothing to write home about - they mainly serve to help identify the current location.

Spy Trek is entertaining enough for a cheapo, and a good buy at £2.99. Expect problems, but trivia as well.

There are graphics, but they are nothing to write home about - they mainly serve to help identify the current location. Expect problems, but trivia as well.
Logout