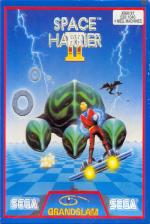 There can't be many games players who haven't heard of Space Harrier. Released four years ago, the game pioneered the use of hydraulic motion to add extra realism - a technique that was adopted by coin-op designers to produce those huge monstrosities we see in the arcades.

Space Harrier II closely follows the format of its predecessor. The plot tells of a renegade member of the Harrier fleet, the Dark Harrier, who terrorises Fantasy Land with his evil guardians. You play the Space Harrier, the last remaining hope of the innocent inhabitants of Fantasy Land, who must conquer twelve zones filled with all manner of outlandish creatures and tricky obstacles before reaching the final zone and confronting the nasty Dark Harrier himself.

Play starts in the teleport station where you begin your travels to the twelve zones. Your brave warrior is armed with a jet-powered photon cannon allowing him to not only blast the enemies but avoid danger when flying across the Fantasy zones.

Once the Harrier has battled through the demons in the zone, he comes face to face with the Dark Harrier's guardians who appear in a variety of guises including a three-headed turtle, a ghostly monk, a devil-headed serpent and even a winged sphinx. Each one requires a different method of attack and soaks up a good few blasts before it's destroyed. When you reach the twelfth level, you fight against all the guardians from the previous zones before confronting the Dark Harrier himself in the ultimate battle to liberate Fantasy Land.

At various points throughout the game, bonus levels appear enabling you to gain extra points and additional lives by destroying as many objects as possible while riding your hoverboard.

Things get off to a shaky start graphically with an incredibly dodgy loading screen to introduce the game. The 3D effects leave a lot to be desired, especially the way objects such as columns and trees appear to jerk and shuffle from side to side instead of smoothly approaching the player. Things improve with some nifty use of raster splitting stretching the horizon's colours off the edges of the screen and the end-of-level guardians are well-designed, with impressive shading and colouring.

The sound consists solely of a series of annoying tunes. If only the same care taken to produce the impressive border effects had been applied to other aspects of the game then Space Harrier II would really be something to shout about.

When a sequel is released, it's a good idea to make enough changes to the original format to warrant buying the title again. Unfortunately, Space Harrier II has almost exactly the same gameplay and appearance as its predecessor. Granted, the aliens have changed and the screen format has been altered, but 20 quid for what amounts to virtually the same game is a bit steep. It wouldn't matter if the game wasn't so repetitive that you lost interest in shooting wave after wave of aliens in about fifteen minutes.

Dedicated fans of the coin-op are the only ones who stand to gain anything from Space Harrier II because the "updated" version only offers a new set of levels instead of standing up as a game in its own right - a fact which won't attract much interest from the casual shoot-'em-up player and which will almost certainly condemn the game to the obscurity it so richly deserves.

When a sequel is released, it's a good idea to make enough changes to the original format to warrant buying the title again. Unfortunately, Space Harrier II has almost exactly the same gameplay and appearance as its predecessor.