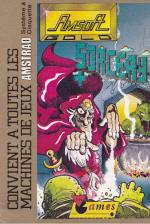 Here it is. The long awaited disc version of the best seller Sorcery. This time there are no problems with loading it from tape because it is only out on disc. Have to save up those pennies an' get a disc drive won't ya?

O.K., plugging over, now on with the game. Shove disc in drive, run it, graunch graunch: almost instant game. Bearing in mind that the last version filled the machine with about ten bytes spare helps you to understand why even the Amstrad disc drive takes its time digesting this one.

Next, you notice that the sound has been considerably jazzed up and the tune played is the good old "Sorcerer's Apprentice". This is also the point where you remember that this is joystick only and that you had better plug one in.

Then you get the high score table, of which the best ones are saved on disc for posterity and embarassment, so think before you call yourself "Flufkin the Magnificent" after scoring 50,000 points. A scrolling message plugging the game and Virgin from here to eternity then scrolls across the bottom. Later on, these messages get quite interesting and throw up the occasional on screen advert.

If you leave it alone, the game gets bored and goes into demo mode. Then it gives another message and a demo of the new bits and so on....

Most of the old favourite locations are there (with a few extra doors of course) but most of the sorcerers and grrabbable bits have been hidden elsewhere and some of the doors are now a darn sight more difficult to get to. Happy hunting.

The axes, spells and shooting stars are just as effective as ever but when a baddie bites the magic dust now, he leaves behind a price tag a la defender and goes up the mystic spout with a wonderous wooshbang noise. There are of course new baddies and bits to bash them with. Only problem is you have got to get an awful long way in to the game to get to the new bits.

Another nice new touch to the game is the way the spooks and unfriendly monks etc. seem to grow up out of the floor when you first enter it as if sprinkled with Gro-More. This sometimes gives you a false sense of security when you first get into a room and see no enemies. Next thing you know, you have been sent on the way to that great magic show in the sky with a despondent tone after being got at by a ghoulie.

The inlay and scrolling messages reckon that you get a chance to get even with the necromancer. As much as I would like to get even with a necromancer, I could not rescue all the sorcerers (you got to do this first, see). This does not mean I have given up, just that I am a little bit out of practise. Soon fix that though.

An intrepid sorceress has just cracked into the second half of the game and reports that it is filled with even meaner dwarves, vampires and even Rolands, not forgetting the dreaded Amstrad Computer User (this is quite useful really) and the Virgin Jumbo Jet. The necromancer is in there somewhere but all you see are the EYES. To bump him off, you surround him with hearts. Stay tuned for more news...

The only real problem with this is, if you've already played the original Sorcery, you have got to get an awful long way in to the game to get to the new bits.