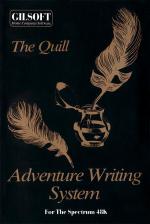 Bob Chappell seeks out adventure with a program generator.

Bob Chappell seeks out adventure with a program generator

Would-be programmers of adventures should welcome this utility with open arms. The Quill is an adventure generator - you supply the plot and it produces the finished program.

One admirable objective only: to take away much of the pain, drudgery and complexity involved in programming an adventure. You still have to provide all the details such as plot, verbs, objects and actions but, using the information you feed it, The Quill will generate a working program.

A neatly-typed 52-page instruction manual comes with the cassette. The first 20 or so pages are a tutorial, devoted to getting you started with the system, the remainder describing in detail the facilities provided. It is essential to read and understand the tutorial before attempting to use The Quill seriously. Parts of it are fairly complicated.

On loading the program, The Quill confronts you with the editor's main menu, at first sight a formidable list of 18 options. However, many are fairly easy to understand and use. The simpler options include saving, verifying and loading a database, changing border, paper and ink colours, finding out how much memory is available, returning to Basic, and saving and verifying a complete adventure of database plus interpreter.

Most of the other main options have sub-menus which are fairly similar in content. These sub-menus normally allow you to amend, delete and insert entries, display them all on screen or have a permanent record by using a printer.

All words, messages, actions and events are given a number to be used both by you, and the interpreter for quick reference purposes. One option handles the part of the database dealing with the adventure's vocabulary. Here, all the verbs and nouns that will be recognised by the final adventure are stored. Synonyms can be used, being tied to the main word by use of the same number. So GET and TAKE might both be word number five.

Other options cover messages to be output by the adventure, the description of each room or location, and the name of each object (such as key or lit torch) and their initial whereabouts (room number, already being carried or not yet existing). As an example of the latter, the lit torch exists only as a torch until, say, it is switched on.

The movement table lets you set up the paths between locations using the usual N, S, E, W, U, D directions coupled with the location number. For example, if the only exit from the kitchen (room 1) is north to the hall (2) and west to the garden (3), then the entry against the kitchen is simply N 2 W 3.

The heart of the database is the event table, where commands can be linked to conditions and actions. For example, GET HAT (HAT having vocabulary number 6) could be set up as GET 6 OK which would signify that if the hat was present at the current location and was not already in the possession of player, it could be picked up.

The conditions can also reference any of 33 status flags: some are reserved for special purposes such as keeping count of the number of objects carried or whether it is light or dark. The rest may be used as you like.

There are 15 conditions and 26 actions allowed by the interpreter. While this naturally puts limitations on the scope of the finished program, there are enough there to keep most adventure writers satisfied.

Conditions include whether an object is present or absent from the current or a specified location, or whether a flag is zero, non-zero, less than, greater than or equal to a specified number.

Actions cover taking an inventory, saving and reloading a game-state, displaying a message, destroying or creating an object, setting, clearing, adding or subtracting flags, and many others. A comprehensive selection, in other words.

One excellent feature lets you test the adventure as you build it. Optional diagonistics are available to let you know the contents of all the status flags at every move. This facility takes a lot of the pain and effort out of debugging an adventure. When you save the completed adventure, it can be loaded and run by itself, just like an other program - everything it needs is already built-in.

When you've created an adventure, it's yours to do with as you like. All Gilsoft ask is that you include an acknowledgement to The Quill in the completed adventure. More than generous, I would say.

Gilsoft already has Diamond Trail, created by The Quill system, on the market. Fairly straightforward, it involves a hunt for the Sinclive Diamond. Quite enjoyable in its own right and worth buying just to see what a finished adventure created with The Quill looks like.

An extremely valuable utility; the best answer yet to the adventure writer's dream of painless programming.