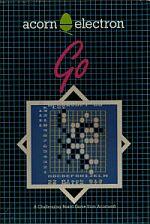 Japan's national board game Go has, over 4,000 years, acquired immense popularity in the Far East, and some game experts categorise it as the world's greatest strategic game, far surpassing Chess in scope.

Examination of the operating system chips in MSX machines will probably reveal routines for this complex game in ROM, but in the meantime you'll have to make do with one of the two British bersions on the market: Acornsoft's Go (based on the program which won the company's 1984 Go competition), and Microgo from Edge Computers.

Before looking at these two games in detail, let's outline some of the general principles behind the game.

Go is, as one might expect, highly inscrutable. There's a simple-looking grid, black and white pieces (called stones) and it looks as if any clot can play it; however, any clot will soon find that this game's one for the addict, and that while the available moves seem very simple, the possible combinations and scope for strategic play, are all but infinite.

The idea is for you or the computer to place a black or white stone on the board so as to "capture" as large an area as possible. You should also try to capture as many of your opponent's pieces as you can. You may not get points for these captures, and your opponent is in no danger of running out of pieces, but at least getting them off the board leaves you more room for manouevre and mayhem. Curiously, there should only be 181 pieces, but both versions give you an unlimited supply.

An idea of the game's complexity is given by the fact that although Acornsoft's board only has 169 positions, it takes three-and-a-half hours for the computer to play itself to a standstill in about 150 moves.

The two implementations are about as different as possible, given that each starts off with a board divided into a grid: Acornsoft's is 13 x 13, Edge's 9 x 9. The graphics used in Edge Computer's Microgo look much better on a colour monitor, and the program includes some rather superfluous sound effects. A proper Go board is a 19 x 19 grid, and have nine 'star' points on it - missing from both versions.

In neither version is there a save option, and in view of the fact that a game can be a very protracted affair, this detracts badly from their appeal. It would be especially useful to the novice using Acornsoft's version, which lets you unravel moves right back to the start if things go badly.

As it is, Acornsoft's backtracking is a great help to the beginner. On the other hand, if you're not watching Microgo very closely, it's quite possible to miss the computer's move, forget what you did yourself, and be left high and dry.

For the beginner, Edge's version probably has the edge. Although there's no printed documentation other than a card giving the seven control keys and details of the skills levels (omitting the four vital cursor keys), there's the facility to run a demonstration program in which the computer plays itself.

The explanations are clear, except when it comes to scoring (i.e. the difference between Japanese and Chinese methods), and why certain areas of the board cannot be used. A demo game takes about eight minutes and 64 moves, but lacks Acornsoft's "thinking" mode. This allows you to see the computer display every possible move for black or white to the end of the game as it calculates the next move.

Microgo's other main advantage is its display. Using the smaller board makes it rather easier to accommodate a side display for captured stones, so its easier to understand sudden gaps in the game when you see the growing pile.

Both versions use the four cursor keys to move pieces: Acornsoft's flashes the last-moved piece and that becomes the cursor's home position (making it very easy to go to an adjacent position, and you can use a joystick); Microgo positions the next piece at the side of the board and slides it smoothly to the chosen position.

Neither version allows you to fix a stone in an illegal position, though it's not always clear quite why your choice isn't allowed. In both, the Atari warning flashes when you make a hazardous move, and is removed on the next turn, though this doesn't necessarily mean that the danger has passed.

For the beginner, Edge's Microgo is better, largely because of its smaller grid and its tally of captured pieces; however, Acornsoft's Go is better for the more experienced player, with its larger grid and greater choice of controls.

Both versions are crash-proof, highly sophisticated, and will keep you either spellbound or bored rigid, depending on your attitude to moving black and white pieces about on a board.

Finally, remember that Microgo's graphics are a bit too good for an average TV, and that it's only available on cassette (though a disk version is planned).