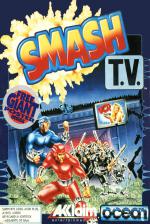 Smash TV | Aiming For Those Dizzy Heights | The Bottom Line 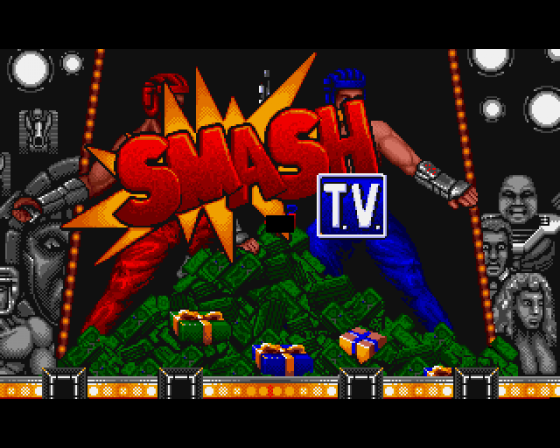 Big money, big prizes. Yep, the stakes sure are high these days when it comes to arcade conversions. Take Smash TV, arguably (and as far as I'm concerned, certainly) the best arcade game of the past few years. No surprises to find Ocean with the licence, but more of a shock to find conversion duties being handled by 3D driving game supremo ZZKJ.

I'll come clean right now, and admit that for me the release of the Amiga version of Williams' ultimate slaughterfest was just as important as any of those more brain-based classics like Mega Lo Mania, Monkey Island and Eye Of The Beholder. It may be the most single-minded, dumb and violent game around - but it's also one of the best (and that's probably got a lot to do with all the aforementioned traits).

The basic gist of the game (For anyone who hasn't been to an arcade in the last three years) is that TV sports have become increasingly violent to meet the demands of viewers. The violence and the ratings rise until one show becomes an all-consuming national pastime - Smash TV. Similar in many ways to the gameshow featured in The Running Man movie, one or two warriors (simultaneously of course) plough their way, arena by arena, through a TV studio bursting with wads of cash, bonus prizes, and several thousand human, robot and bio-mechanoid nasties. As you can probably guess, the idea is to clear each arena of the requisite number of nasties, collecting as many goodies as possible along the way. This presents players with one or two problems. One - the sheer number of bad guys, who all either home in, explode at, or shoot at our hero(es). Two - in order to have any chance against this army of death each player has independent firing and movement controls. To achieve this, the arcade machine uses one joystick for movement and one joystick to angle the player's weapon (just like Williams' ancient Robotron coin-op - the game which Smash TV is essentially an update of). This being the '90s, there're also four End-Of-Level Guardians in there. First up is Mutoid Man - half man, half machine, all evil (as they say). Scarface and The Cobra Twins are the next two, with the TV Show's presenter himself to battle it out with in the final arena. 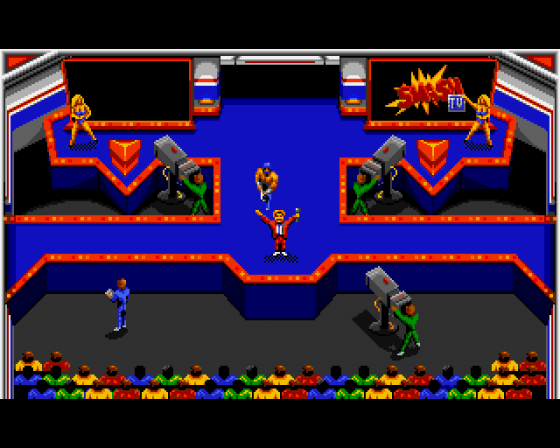 And so we come to Ocean's miniaturised Amiga version - and I really do mean miniaturised. Before I go on though, I ought to stress one very important point - I do really enjoy this game. It's good fun, and the two player mode is great. Having said that though...

The first noticeable thing about Amiga Smash TV is that the playing area is sooooo much smaller than in the arcade original. And as you'd expect, this leads to all kinds of problems. For a start, the whole relationship between the warriors, the play area and the bad guys has been altered to compensate for the smaller screen size. Movement patterns aren't quite the same, and collision detection is far more uncertain than in its arcade parent. There's a lack of fluidity in the control, too - strange when even the C64 version has managed to capture this element of slickness - an essential part of any Williams arcade game. And then there are the End-Of-Level Guardians. While in the arcade original lives were only lost through bad judgement or stupidity, this version alters the difficulty level drastically and those lives just go tumbling away. In the arcade game the majority of lives are lost in the main arena screens. In this version, getting through the first set of arenas to Mutoid Man is relatively easy, but getting past him is nigh on impossible. This doesn't seem fair at all.

There are other, less important but nonetheless niggling, irritations with Amiga Smash TV - the way the speech samples are used in the wrong situations and the general inaccuracy of sound fx and mix, the lack of scrolling between arenas (Amiga owners have to make do with the screen blanking, save for a Smash TV logo) and so on. Whatever the reasons for it, the word 'cheap' springs to mind. The control system is less than ideal, too. For those unlucky enough not to own two joysticks (or four and an adaptor in two player mode) then a fire-in-the-direction-of-movement system is used. This simply doesn't work. It means that in order to shoot at something the warrior must run straight at it. There are two keys on the keyboard to lock the firing, or reverse it, but in practice these are just unusable - the game is far too frantic. The system used in Jeff Minter's Llamatron - where the gun fires automatically, and all pressing fire does is lock it into the direction you're currently moving, a direction it continues to point in even when you scoot off at a different angle - would have been a much better bet.

There's been a lot of arguing at Amiga Power about this one. Half the office thinks that the game concept is simply too slight to stand up as a full price product in the first place. Then there's Stuart who, like me, loves the arcade machine, but believes this to be a very poor conversion, losing all the magic of the original. And then, there's me, I'm disappointed, sure, but I still like it - if only there hadn't been so many compromises made in the conversion.

The reason I'm being so negative is that I believe that it could have been better. Much better. Maybe because I'm such an avid fan of the arcade machine I'm being too picky, and expect too much from the humble Amiga, I don't know - all I do know is that, if it had been a true copy of the arcade machine, I'd be tempted to give it the highest rating in Amiga Power ever. But it isn't, it's just a groovy little blaster. Buy it, but don't put it at the top of your list.

Uppers: At last - an Amiga version of my favourite arcade machine! It's just about all in there, and they've even included two player and two joystick modes. A lifetime of gross-out ultraviolence awaits.

Downers: It just doesn't meet my admittedly high standards. I wanted an exact, pixel-perfect treatment of the original. What they've done instead is produce a cut-down (particularly in screen size) interpretation of the coin-op.

A disappointment, but still a damn good game. Maybe I was expecting too much, I don't know. I've got me problems with it, sure - the changes to the Mutoid Man screen are particularly bad - but despite my complaints, it still manages to be one of the most enjoyable blasts I've seen all year. Good stuff.

Smash TV | Aiming For Those Dizzy Heights | The Bottom Line

A damn good game. I've got my problems with it, sure - the changes to the Mutoid Man screen are particularly bad - but despite my complaints, it still manages to be one of the most enjoyable blasts I've seen all year. 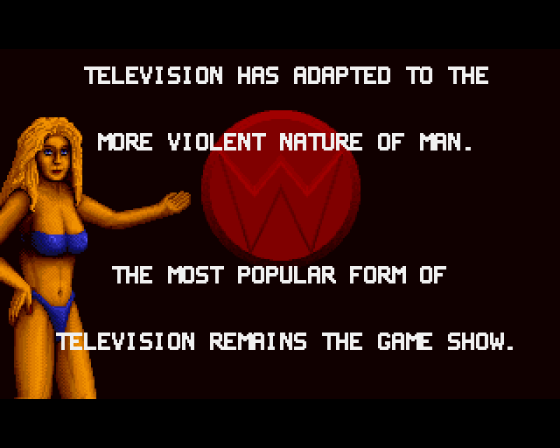 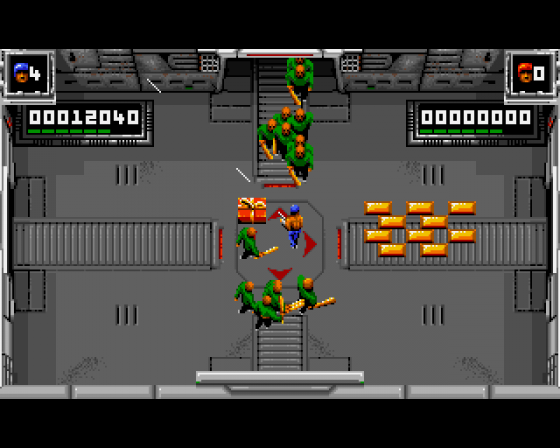 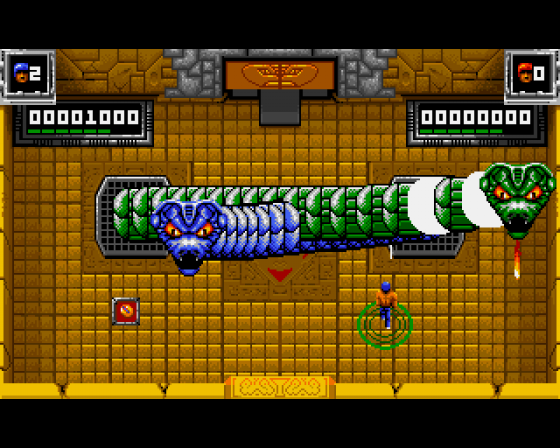 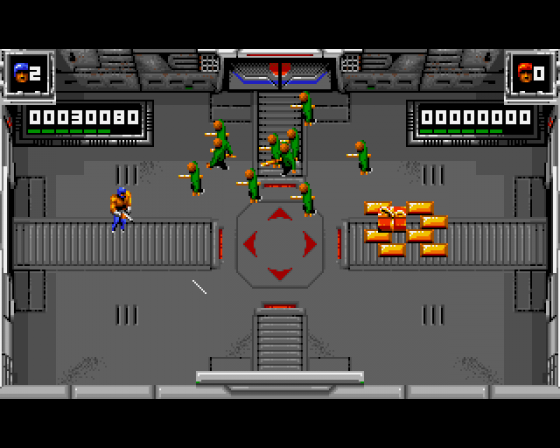