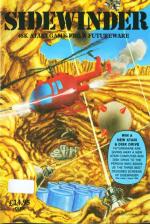 Sidewinder is a well-written arcade game where you have to pilot a helicopter through underground enemy installations in search of kidnapped colleagues.

As my helicopter appeared on the take-off pad, the screen filled with laser beams, gravity bombs and various large buildings and caverns.

I took off and the screen scrolled from right to left, revealing even more traps and joystick-breaking twists and turns.

Reaching the other end of the cavern after what seemed a nerve-shattering eternity I landed on the pad. Suddenly this raised to an upper take-off point and I had to fly back to the starting pad while avoiding new hazards.

Eventually I completed the first level, and progressed to a more difficult cavern with stronger defences.

You can replenish your ever-diminishing fuel supply by bombing fuel pods.

There are five caverns, and the fuel pods become harder and harder to hit. If you manage to complete the fifth cave there is quite a surprise in store, but I will leave that for you to discover for yourselves.

Sidewinder is great fun to play because it holds your attention, something that is missing from a lot of software nowadays. I found it very addictive, playing game after game to get on to the next cavern.

The program also offers a screen editor which allows you to design your own caverns, saving them to disc or tape.

Great fun to play... It holds your attention, something that is missing from a lot of software nowadays.