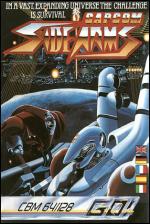 In Side Arms you play Lieutenant Henry, setting out to rid the blue planet of the dastardly Bozon, blasting your way through a multitude of strangely similar attack waves, trying not to succumb to the boredom of the inter-level loading. The classic enemy is the end-of-level guardian: a mere blob the size of your character's head, which just spews out the wimpish attack craft you just spent a level destroying.

The biggest piece of baloney connected with Side Arms has got to be the back-of-the-package hype which claims it's "classic shoot-'em-up action". I think I'd rather a game of classic Invaders than waste any time on this. Yet another mickey take on the packaging states "brilliant graphics".

The one thing Side Arms does present in its favour are the selection of extra weapons available, though this process is now becoming very dated. After blasting an alien you are initially left with a POW sign. Shoot that a couple of times to transform it to three-way fire which lets you fire at three different angles. Blast the three way a few more times and that becomes a mega laser; here the game falls prey to the old syndrome of bad sprite detection; your tiny little laser will destroy anything it hits and then carry on, but it also destroys everything within a distance above and below it. I doubt very much if this is supposed to happen; it doesn't look very much like it was intended to. The next weapon is rear fire, which fires at two angles out the back of your space suit. This has to be the most valuable weapon as the aliens fly toward you then double back and try to ram you in the botty. Sometimes you can collect a weapon called auto, which is a rapidly spinning sphere which spins round your man, firing off random laser bolts.

Any of the weapons can be activated at any time once collected by pressing the Shift key. There is also alpha and beta beams which sounded pretty deadly to me though I never managed to find any. If you collect the POW symbols as they stand your laser speed increases; you can do this four times. But if you shoot the POW symbols too much, they revert into WOPs which make you lose speed when they're collected. As well as weaponry you can collect things like cows and strawberries, it beats the hell out of me what they're doing in the middle of a full scale inter-galactic war anyway. But that's stellar life.

The shoot-'em-up doesn't have a divine right to be good. Some shoot-'em-ups can be bad. This can be caused by bad gameplay, bad graphics or bad sound. So Side Arms has a little multi-load (like every level) but other arcade games are multi-load too, aren't they? Side Arms has bigger problems - like a screen that attempts to scroll at the speed of a C5 in first gear (and that's slowwwww), like graphics which are lousy and repetitive, like enemy sprites which buzz about devoid of ferocity, which when they are replaced by a different type of nasty, follow exactly the same paths as their predecessors.

Shall I go on? The backdrops are amazingly monotone, spotted blocks line the ground surrounding slowly wavering lakes, occasionally a little man will appear, wave his equally small fist at you and submerge again. The sonics are equivalent to listening to Roger Whittaker's greatest whistles played at half speed - not very pleasant I can assure you. But most important of all Side Arms is nothing like Side Arms the arcade. The arcade version was fast-moving and it could hold your attention for at least a couple of quid, but this couldn't hold my attention for a femtosecond.

Side Arms is really a classic case of a game which could convert to 8-bit machines but is badly done. And this is a bad conversion, a sort of Nemesis with a geezer and an outboard motor strapped to his back. Pretty abysmal and not even worth the slightest notion of buying it. Avoid this like you would avoid a swarm of rabid African Killer Bees.

Pretty abysmal and not even worth the slightest notion of buying it. Avoid this like you would avoid a swarm of rabid African Killer Bees.