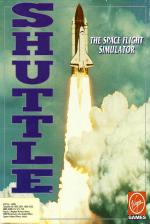 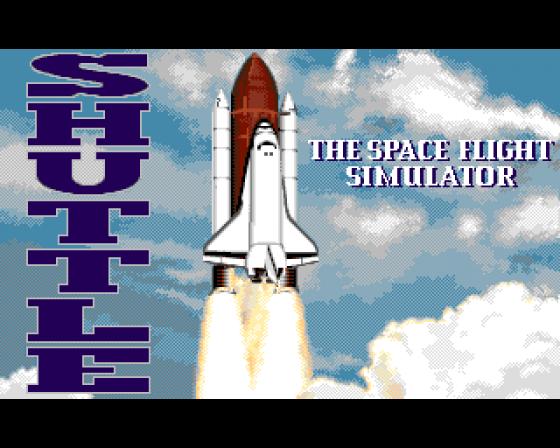 Delve into the deepness of space with the ultimate in flight simulation.

Outer space. It's a pretty big place. But it means a lot more to mankind than an endlessly expanding blackness peppered with a few mildly interesting stars. It's the Final Frontier. It's about flashing down the Death Star trench with Luke Skywalker. It's the massive shoot-out at the end of Moonraker. It's 2001: A Space Odyssey. It's Flash Gordon. It's a terrifying journey on the Nostromo with the Alien. It's about going light-speed in the Millennium Falcon and warp-speed on the USS Enterprise. Outer space, not only is it big, it's damned exciting too.

And then there's Shuttle. WIth all this intense action going on all around, with fictional alien races just waiting, if not begging, to get destroyed, what do we get? A simulation of a jumped-up glider that takes twelve hours to launch (if all goes well) and can barely put a satellite into orbit without causing palpitations at ground control in Houston. It's hardly the stuff the Close Encounters Of The Third Kind are made of, but then if you want a realistic simulation of man's first re-usable spacecraft, you certainly came to the right place. The only trouble is, you might end up regretting you ever turned up. 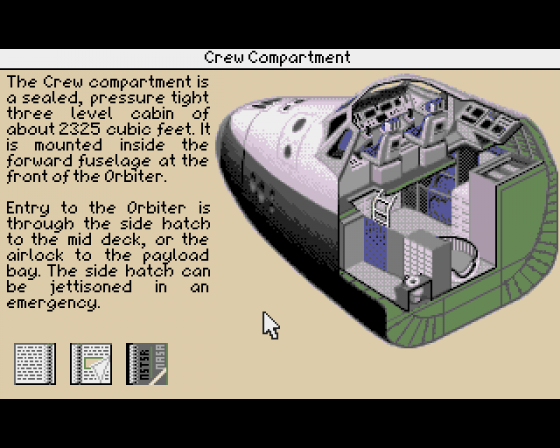 Don't expect too much excitement from Shuttle, after all the craft was only designed to transport cargo into near-Earth orbit (that's between 100 and 217 nautical miles up, fact fans), not to repel alien invaders. You can just imagine the tension as Earth comes under attack from swarms of well-armed extra-terrestrial craft, and the shuttle is out last line of defence. "Er, can you just hold on a minute. Roll-out's going to take seven hours, then we've got five hours on the gantry, so, all being well, we should be able to fight you in about twelve hours time. Is that a date?"

This game, and I use the word to the loosest not-very-much-fun-to-be-had-here-at-all sense, is all about the nitty-gritty and tedious realism of piloting the space shuttle. And yes, if you do have a burning desire to experience the ultimate in mind-numbing simulation, you can sit back and watch for seven hours while the shuttle moves from the hangar to the launch pad.

The game does its best to break you into the gargantuan simulation by giving you a bit of a dolly for the first mission - the shuttle's riding piggy-back on a 747 and you just have to land it. But even so, there are a good few buttons to push as the ship cruises in, and it's all too easy to miss the runway and trash your multi-billion dollar glider. The game's sensible structure means you have to complete a mission successfully before you're allowed on to the next one, so you have to master the basics. On more advanced missions you're given a breakdown of your performance in several different areas, and no matter how hard you try, invariably it's the landing that lets you down. "Shuttle was destroyed on landing". Now there's one phrase I don't want to see again... 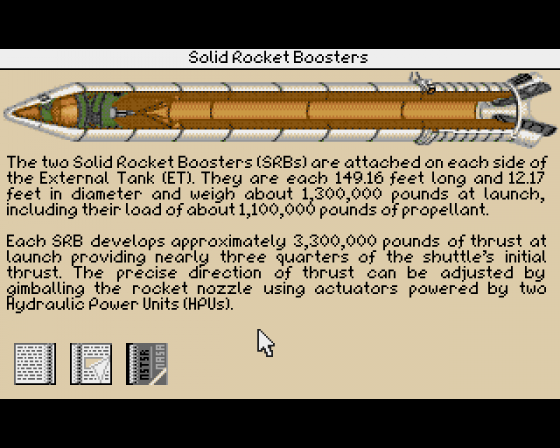 Thankfully, like a benevolent school teacher, the game only makes you re-sit the parts of the exam that you failed first time around, so you don't have to go through the lengthy rigmarole every time you slip up on landing.

I've never been a great fan of polygon-based graphics, and Shuttle shows their worst side. Total the ship on landing, and you're treated to a not-so-spectacular display of grey-black smoke with occasional bits of shuttle flying from the darkness. And when you do manage to make it into space, the supposedly awe-inspiring view that has given astronauts more religion than Billy Graham ever could, is a decidedly sad three-colour set-up, with black sky, blue seas and green land. It's all rather disappointing really.

But when you've stopped admiring the lack of decent views, it's time to press a few more buttons. Messages from ground control tell you what the hell you're supposed to be up to, and on the easier skill levels the simulator switches automatically to the correct panel for the next button push. This is important at the start because there are eight panels to keep you entertained (I think it's one for each of the seven dwarfs and an extra large one for Snow White), all of which have more than one screen's worth of buttons. And, depending on the mission, you have a variety of different buttons to push and clocks to watch. And so it goes on. [Hang on a minute! What's all this 'Snow White' rubbish? - Ed] More missions, more buttons, more realism, more cock-ups, more explosions... Some of the trickier missions, such as repairing the Hubble telescope and attaching a crew module to a solar panel, provide more scope for manual interaction, but they're all pretty slow. Don't expect anything to happen quickly. Apart from the lack of speed in what's being simulated, the game grinds at the disks every time you switch to another control panel - playing on a single-drive machine is an absolute joke! 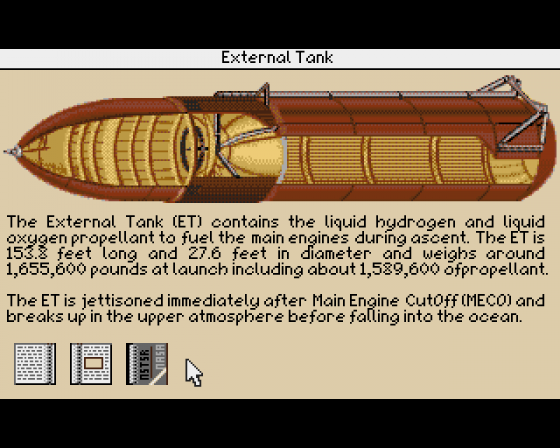 The space shuttle is such a complex beast that the simulator is necessarily tough to get to grips with (it makes Megafortress look like a shoot-'em-up). Astronauts have years of training before they're even allowed to covet the hallowed shuttle shape, but somehow Vektor and Virgin expect you to climb aboard and fly around without a tutorial. Sure, the manual explains all the menus, and what all the buttons do, but it's stuffed full of acronyms, initials and jargon. The game will keep you going for ages, but that's partly because the shuttle's so complicated and the manual does such a bad job of explaining how to control it.

Never having flown a real space shutttle, and never having been into outer space, it's hard to say how well the game recreates the out-of-atmosphere experience. One thing is for certain though - the Earth, moon, seas and continents aren't made out of polygons, so the view would be a lot more inspiring.

As an exercise in the by-the-book button-pushing simulation, Shuttle scores top marks. If it's knobs and switches you want, you got 'em in abundance, but don't expect a game - this is too much like hard work. Ultimately it might be rewarding for Shuttle fans - there's everything they could possibly want, apart from the experience of trying to eat pureed microwave chicken curry from a foil packet in zero gravity - but for the majority of the Amiga-owning population, there just isn't enough fun.

Uppers: The best simulation of the space shuttle currently available for the Amiga. Realistic in practically every way, the attention to detail really is astonishing.

Downers: Not much fun to play, the presentation is poor, the manual is unhelpful, disk accessing is a pain.

If you're a big NASA fan and have always wanted a shuttle simulator, buy it now. If you think it might be worth a look for novelty value, think again. If you like to enjoy yourself when you're playing games, steer clear.

If you're a big NASA fan and have always wanted a shuttle simulator, buy it now. If you think it might be worth a look for novelty value, think again. If you like to enjoy yourself when you're playing games, steer clear. 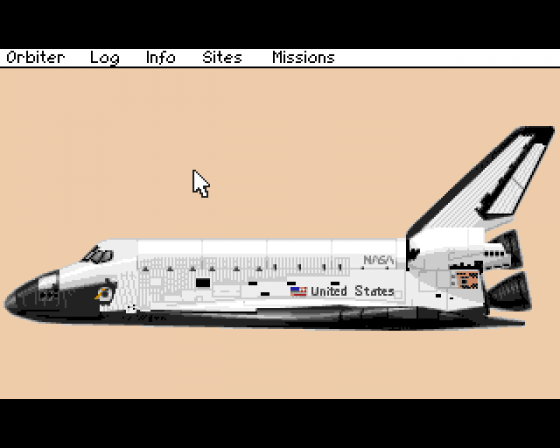 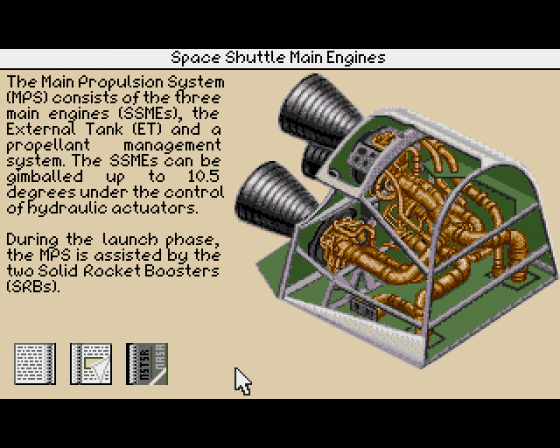 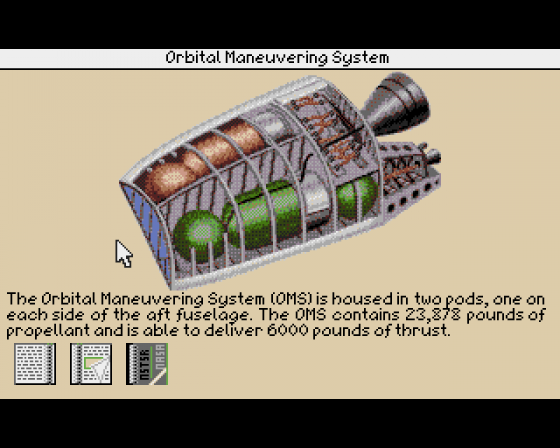 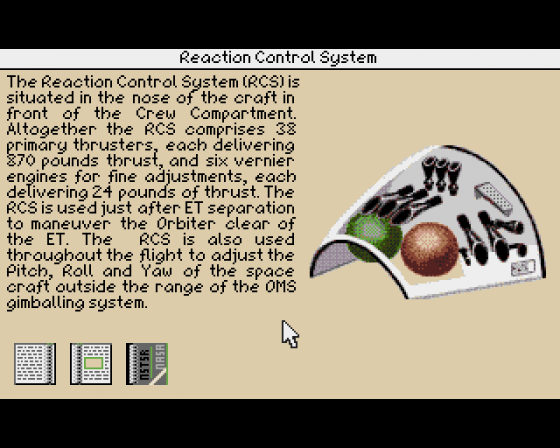 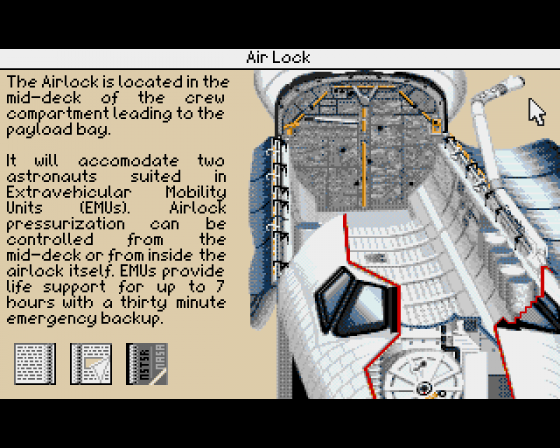 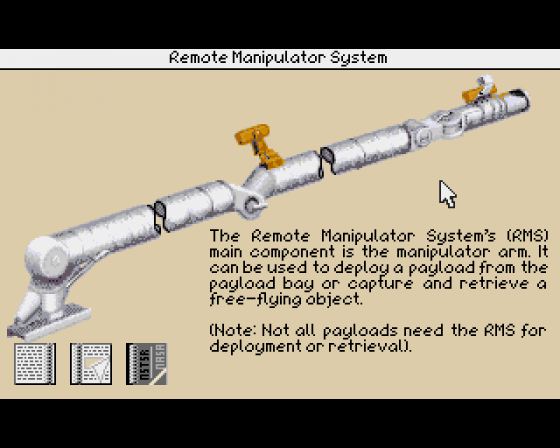