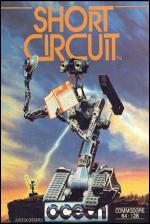 The next time CU decide to hold a 'Game of the Film' competition, a tricky question to pose would be: "Which film now showing in England hasn't yet been made into a game?"

In this particular one you take the role of a government War Robot who has been struck by lightning and escaped. Now you are alive you intend to stay that way. Not so easy - the scientist who put you together wants to find and deactivate you, so do Nova Electronics who have to stop your weapons killing millions, as do the Security who just want to get home in time for dinner. Oh well - if that plot is good enough for the film, Ocean may as well use it in the game. Saves them having to think up anything original.

There are two parts to this arcade adventure, the first part is set in the factory where you are kept. The object is to escape.

Your robot is controlled by joystick, it has four extra control functions which are activated by the fire button. To switch to the desired function, simply hit the space bar to: jump, laser, search and utilise.

The jump function is pretty obvious although you do need to find something called a 'Jump RCM' before you can bounce in all directions.

The laser, too, is pretty straightforward but obtaining it is a different matter. Whenever you try to use it, you are given the message "More input needed".

The search function is the key to the game. Find furniture (or just about anything) search it, and your VDU will tell you what's in there. To pick up, just stab the fire button once more.

The 'utilise' function will enable you to manipulate your findings. You can either 'hide it' - this is useful when your hold is full - you can stash an object somewhere and then go and collect it when needed. Also you can 'input it', this allows you to stick your thing (or things) in whatever your wish [Cut it out! This is a family magazine - Ed] the computer will then tell you what effect, if any, it has. Or you may choose to ask you systems to 'analyse it' before you decide on your desired use.

Most of the first part of the game is spent wandering around, searching and testing which objects are the catalysts and which are the red herrings. Cautious movements are required if you do not wish to set off the alarm. If you touch anything you shouldn't, in a matter of seconds government agents will be around to de-activate you.

The locations you pass are anything from offices to toilets.

In every arcade adventure, there are 'red herrings' to be found, but are any quite so perverse as the Labrador puppy with the toilet-roll around its neck that is found in the little boy's room?

The second part of the game is more like a bonus than a continuation. A mediocre little shoot-'em-up in which you must stun the guards with your laser on your way to safety, but careful that you do not run over the wild animals. Ah, how sweet, Ocean obviously deserve the 'Anne Diamond Sickly Sweet Award' for 1987.

Short Circuit is presented excellently: big, colourful graphics, which make the game a whole lot more interesting. A boppy little disco number from Martin Galway to play along to. Ocean also paid amazing attention to detail, even bothering to draw in a pair of feet under the door of one of the men's cubicles. A bonus game chucked in, even if it is a pretty average one, remains "something for nothing!"

OK, so everything is almost perfect, why then no screen star? The game is entertaining enough, but imagine it without a big-name licence. You now have a pretty, little arcade adventure. Forget for a moment the luscious graphics and sound. You now have a basic, pick-up and drop arcade adventure. If that is what you're looking for, fine. If not, don't be blinded by the name and screen shots.

A pretty basic, pick-up and drop arcade adventure. If that is what you're looking for, fine. If not, don't be blinded by the name and screen shots.