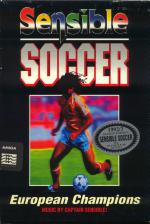 Let's be completely up front about it: this is the best two-player game we've ever played. (Yes, better than Speedball 2!) And easily the best footy game of the year. 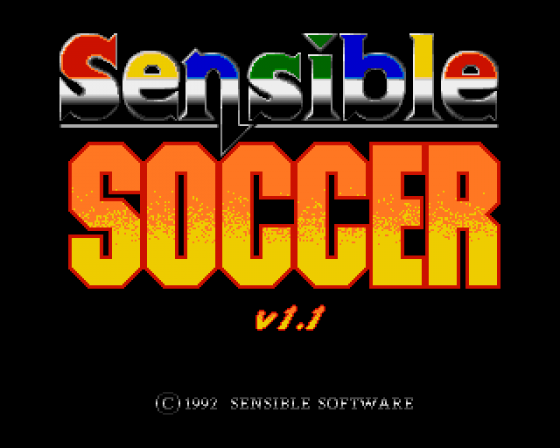 You've waited. And waited. You've suffered the hype. You're read the 'reviews' of the half-finished demo version elsewhere. But now, Sensible Soccer really is finished, really is ready, and really is here in front of me as I type. No, really. And it's totally wonderful. Surprise surprise.

But first, the facts. Sensible Soccer gives you 100 (32 international, 64 European club) realistic teams (i.e. Germany are better than Iceland), each with sixteen currently up-to-date players. You can change the names of the teams and players at will, as well as the colours and designs of the team strips, the colours of the players themselves, and even the colour of their hair. Your chosen (or customised) team can play (depending on whether you're in club or international mode) in any of the three major European club competitions, a European superleague, the European Championships (which should be in progress as you read this), a knock-out international Euro-Cup, a League Of Nations, a league or cup competition of your own design, or a simple friendly. If you like, you can even watch two computer-controlled sides of your choice play a friendly against each other and try to pick up some tactical tips.

There are seven different types of pitch to play on, which you can select manually, take randomly, or have accurately mapped to the time of year each game is taking place (so that, for example, in a league which starts in January - you can, of course, choose when you want it to begin - there'll be more icy pitches at the start, but as the league progresses into summer dry, hard pitches become more commonplace). You can save custom team data or half-finished tournaments to disk at any time (save slots provided on the game disk for three sets of customised teams), and in competitions you can have up to 20 teams, any or all of which can be controlled by human players. 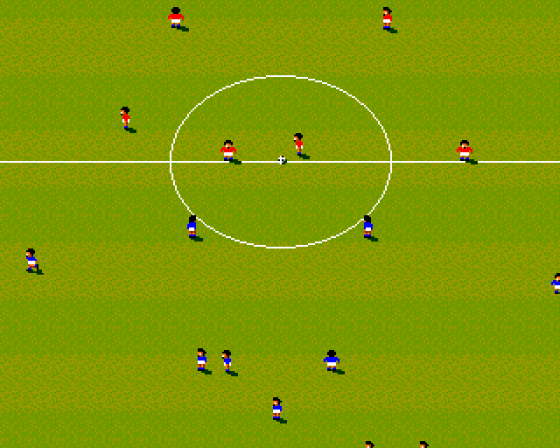 During play you can have an action replay at any point (normal or slow motion, and you get them automatically after goals, although you can switch this feature off if you want), and you can choose to save the replay into the optional end-game highlights sequence which replays up to ten incidents from the previous game in chronological order and can be saved onto disk to impress your friends with at a later date.

Any time the ball goes out of play, you can call up your bench and make substitutions or change your formation (and for once, it makes a tangible difference), or simply exhort your team to desperate attack or defence. You can start a tournament, stop halfway through, play a couple of friendlies, start a completely different tournament, then stop and rejoin the first one again at the point you left it, without having to resort to saving at any time. There's more, but how much do you need?

Okay, still awake out there? I know this sounds like Sensible wrote it themselves so far, but there's a reason. All the other footy games we've looked at recently (John Barnes, Striker, Euro Football Champ) have been fun in their own ways, but they've all shared a common flaw - having no depth whatsoever. In John Barnes you get eight teams and one competition - you can complete the whole thing in a day and not be overly fussed about playing it again. Striker gives you a single, even less sophisticated tournament or straightforward friendlies, and Euro Football Champ is the thinnest of the lot, with practically no structure at all beyond the matches themselves. 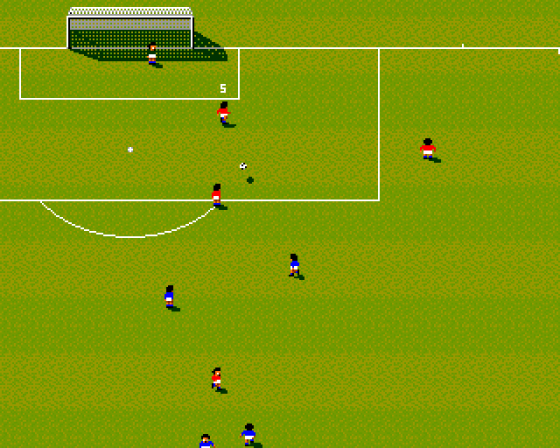 Sensible Soccer, however, is a game that will in all probability last you as long as your Amiga does. In solo mode the difficulty is perfectly judged for a constant challenge (you can beat Holland in your first game if you're very good or very lucky, but a drubbing from San Marino is always a possibility however much you practice), but the game's biggest strength lies when you get a few chums together for a tournament (something that Striker and Euro Football Champ sadly lack), and with up to twenty players catered for most people won't have problems giving all their pals a game. (In fact, with the whole Amiga Power crew and all their friends all playing at once, there was still room for the entire staff of ST Format to join in). If you ever exhaust all the possibilities of this game, contact The Guinness Book Of Records pronto, 'cos the chances are you'll be at least 140.

"Yes, yes, Stuart," you all cry. "So we know you love it, but why exactly?" Well, it's like this. Everything that people used to say about Kick Off 2 is true, but it's true about Sensible Soccer. This is true instinctive control (sliding tackles, volleys, diving headers are all within a single touch of the fire button), this is true perfect playability, this is a true football simulation as well as being a fabulous game. The single-touch pixel-perfect passing makes the creation of beautiful flowing moves easier than falling out of a rowing boat off Copenhagen, and the scale of the graphics actually gives you a chance to use tactics, planning and skill. The constant and ever-changing crowd noise (the crowd actually react to events on the pitch in a realistic and geographically-sensitive manner) gives the game an atmosphere so close to the real thing that you'll find yourself completely immersed in it inside 60 seconds.

The goalkeepers are spot on too. They're computer-controlled and very good, but - and here's the crucial bit - they're still fallible, in that every now and again a speculative 40-yarder or a half-hit daisy-cutter will squirm out of their grasp or under their body. There's no simple exploiting of algorithmic weaknesses here, the best tactic is to rain in shots from all angles and ranges and try all sorts of different approaches - in fact, it's just like the real thing.

And if there's one thing that makes Sensible Soccer stand out from the crowd (and especially from KO2), it's that - from the first kick to the end of the penalty shoot-out, this feels like real football, not like some crazy pinball game or a dull slog up and down the middle of the park. It takes what good points there were in the Kick Off games and expands infinitely upon them, adds the best bits of Speedball 2 and every other football game ever, and then executes the whole thing to a level only previously seen in Jimmy White's Whirlwind Snooker and F1 Grand Prix.

Even up to about a week before it was finally finished, I had doubts over whether this game was going to fulfil its promise. I was wrong. It's damn near perfect. Don't even think about buying another football game until you've got this one.

Downers: Um... I suppose it could occasionally be a bit better at judging which was the best player for you to be in control of. And world rather than just European teams would have been nice. But then, you can make these yourself.

One of the Amiga's top three games of all time, and definitely, without the merest inkling of a suggestion of a shadow of a doubt, the best football game ever. What did you really expect?

One of the Amiga's top three games of all time, and definitely the best football game ever. 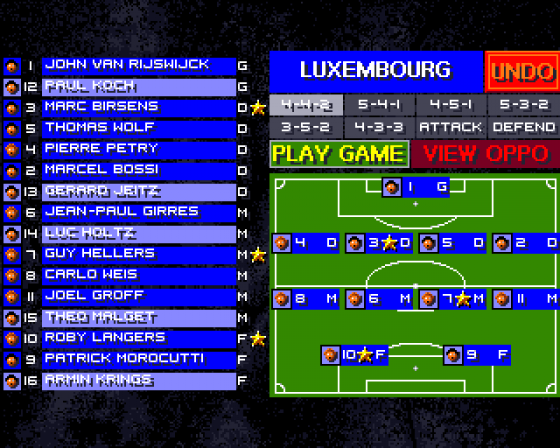 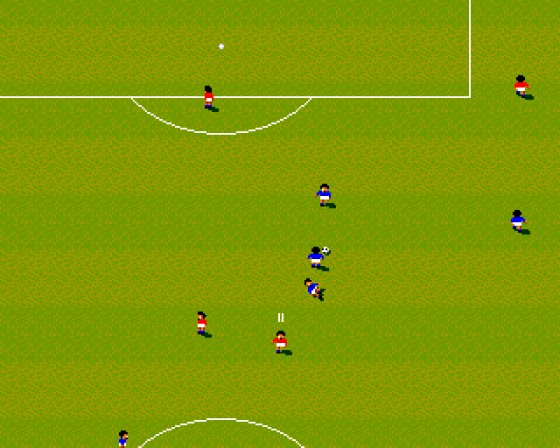 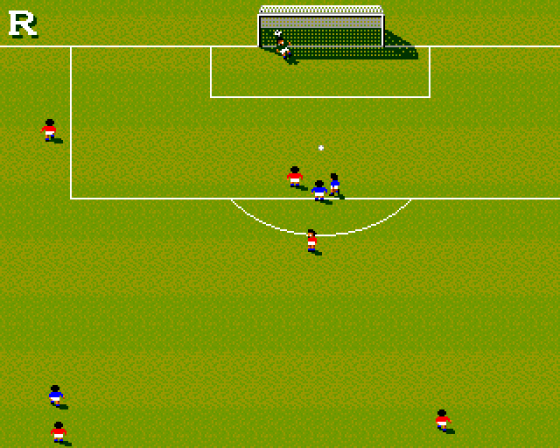