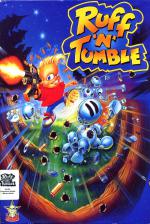 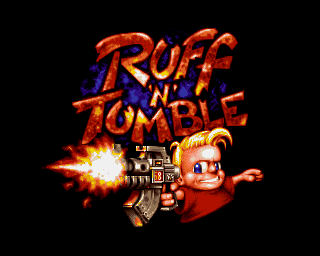 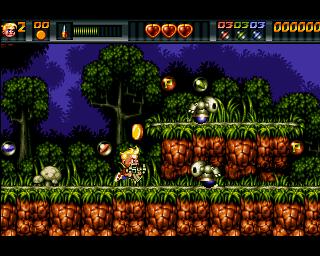 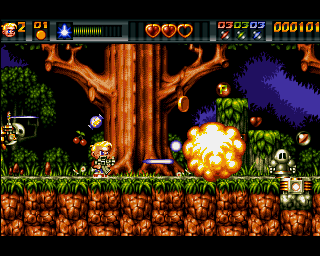 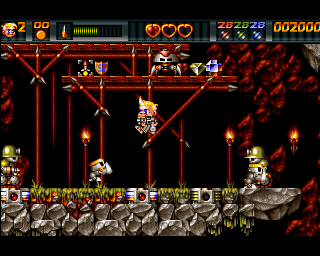 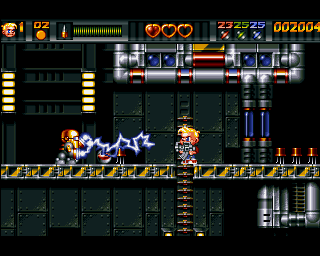 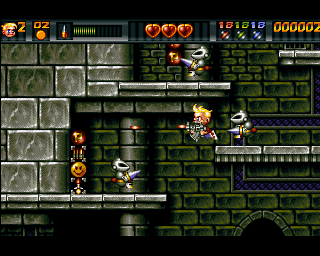 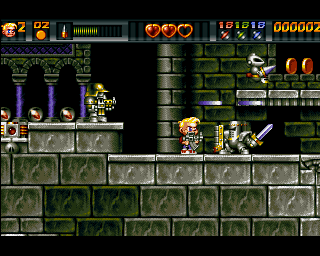 Ruff 'N Tumble made me swear one helluva lot, and I hate it when that happens. It's quite the most difficult, frustrating game I've played all month. And yet, because it's so good, I had no choice but to keep playing it.

"You... you dirty rotter!" I'd cry as yet another armour-plated buddy shrugged off my hail of bullets and continued to stomp towards me, his laser bolts ripping me apart like a watermelon (remember that scene from Day of the Jackal? Yes, like that...). Riled beyond measure, I'd hurl my joystick through the screen, resulting in hundreds of pounds' worth of damage and fusing the electricity on the entire second floor of Future Publishing, unwittingly causing work to grind ponderously to a halt on several of Britain's biggest-selling leisure computing magazines.

But, after walking swiftly round the block a couple of times to let off steam, I'd always return, sweep away the debris, purchase a new monitor from Dixons and arrange for Chris the Handyman to reconnect the electricity. Grasping my joystick with renewed vigour and determination (and barely flinching as the shards of cathode ray tube embedded in it cut into my palms), I'd vow to get even - maybe firing on the baddy from the platform above him, out of range of his guns - and make it to the next level. Ruff 'N Tumble is that kind of game.

It's also, in a funny, platform gamey sort of way, surprisingly original. It looks reassuringly familiar when you first load it up, but think about it, when was the last time you played a platform game where, instead of jumping on baddies' heads to kill them, you could shoot them with a variety of firearms? Quite a while ago, I'll wager. Turrican is the obvious example, and Ruff 'N Tumble is a kind of a cross between that and something cute and slick like Naughty Ones or indeed Putty Squad.

The first world's even a Woodland (TM) one. You leap from grassy knoll to leafy treetop, venturing into earthy tunnels from time to time in search of bonus items. If it weren't for the lamentable rave music blaring out of the speakers, drowning out all but the loudest sound effects, you could almost imagine you were happily playing Mr. Nutz.

Oh, except instead of rogue blackcurrants and chickens, your path is blocked by a band of the meanest, toughest robotic baddies ever to feature in a computer game. They're all swathed in armour playing (your bullets 'ping' into them quite satisfyingly), and even the weediest ones - the ones that stream out of generators and queue up to be blown away - would be more than a match for ED-209. The truly evil ones, meanwhile - like the American Footballer-type ones who put their heads down and charge at you, absorbing hundreds and hundreds of shots, and even after you've finally managed to take them down, get up again and have another go - would probably give an Imperial Star Destroyer a run for its money. And what about the metallic firemen, who come running towards you and suddenly, with no warning whatsoever, fire out some sort of hose thing which impales you through the stomach? No mucking about.

Your standard gun is pretty hopeless in the face of odds like these, and, although power-ups are available, they're sparsely scattered about. There's one that doubles your rate of fire, one that turns your bullets into laser bolts, and then various special ones in each world, like a flamethrower in the Woodland world and a brilliant rocket launcher in the - yes! - Underground Cave (TM) level.

There are also all the usual shields, energy power-ups and extra lives, many of which can be released if you kill a whole series of baddies in quick succession. (The game works a bit like a scrolling shoot-'em-up in that respect, which is neat). And, on the subject of pick-ups you can get bonus points for running through (sigh) floppy disks, joysticks, mice, batteries and (groan!) microchips. (Why can't people occasionally search a little further than their own desks for inspiration? Printing "Loading Please Wait" in between levels in one way of shattering the fragile illusion of a computer game, having loads of floppy disks and joysticks lying around all over the place is another.

How about hanging banners from the scenery proclaiming "You are playing a computer game"? Or making the baddies hold up little signs saying "I am not, in fact, a nefarious robotic alien bent on your destruction, but merely a collection of digital data residing within your computer's memory"? Tsk.)

But, although power-ups are few and far between, the way they've been scattered about the levels has been achieved with dastardly deviousness. That group of robotic wasps swarming towards you might look pretty terrifying, but not if you picked up the flamethrower from that little side-passage you just passed.

And sometimes you're better off leaving weapons alone for a while until you've shot away a few of the easier baddies, and then going back for them when you're in really desperate need of them. This is a game that starts off looking impossibly difficult, and then, once you've worked out a technique for each level, turns out merely to be incredibly hard instead. Easy.

There are doors to open, too, which require you to find keys. Some involve you venturing into tricky parts of the level you'd otherwise have given a miss, which others, although it's not essential you open them, have tempting power-ups lurking behind them. All very Alice in Wonderland.

There's one such door right near the start of the levels, with a handy extra life behind it, but you'll search in vain for the key. It's not until you get right to the end of the level that you realise that you've gone all the way round in a circle, and you're back where you started, but behind the door. Pretty damn sneaky, I thought.

And also, of course, formidably hard. Baddies don't generally reappear if you kill them, they don't walk away and come back again. But there are generators which carry on spilling them out - like the ones in Gauntlet - except you can't destroy them. That means the place is always crawling with robots. And really hard-to-kill ones, too, who take great delight in running towards you and taking advantage of the fact that, as is the universal rule in games, in any collision between you and a baddy, you'll always go "Aaargh" and lose some energy while the baddy will come off just fine. And they're all really intelligent, as well. If you sneak up behind one and start merrily blasting away, he won't just dumbly blunder onwards until he dies, oh no - he'll wheel around and pump you full of a veritable hail of photon unpleasantness, fearsome fireballs or common or garden bullets.

And the bosses. Phew. If you're of the opinion that bosses are meant to be some sort of reward for completing a level, a kind of interlude, rather than some sort of test you've got to pass before going onto the next bit, then you'll hate Ruff 'N Tumble. The giant owl at the end of the first world comes flying towards you in a hail of laser bolts and kills you virtually instantly. He's got a pattern you'll eventually learn, but, of course, to do that will take loads of lives, and once your meagre ration has expired you'll have to go all the way back through World 1 before you can try again.

Challenging? Or frustrating? It probably depends on your temperament. After a time I ran out of expletives and had to content myself with simply gazing at the screen in shattered disbelief, dazedly shaking my head.

But, although Ruff 'N Tumble might be difficult, it's always completely fair. Every level has been meticulously designed to ensure that you never have to jump blindly off a platform in the hope that some spikes won't scroll onto the screen underneath you. (Indeed, the screen often scrolls of its own accord to show you otherwise-hidden bits.)

Every baddy can be dealt with safely if you work out the best approach. Power-ups are placed just where they're needed. Indeed, if you were some kind of games-playing colossus, with pico-second reactions and immense powers of calculations, there's no reason why you shouldn't be able to play through the entire game on your first go without losing a drop of energy - nothing's been left to chance.

And on top of all that, it's fabulously well-programmed. A slightly dull choice of colours means our screenshots probably won't do the game justice, but the animation is beyond compare, and all the sprites have loads of character. The flame throwers work just like real ones, rockets whoosh off purposefully, and the explosions when a baddy dies really justify all the effort you have to put in.

The only things I could really find to complain about (a) 'up to jump', although, given that the fire button's given over to controlling your weaponry, it's hard to see how this could've been got around (apart from recognising a two-button joystick, of course); (b) a slight lack of surprises once you've encountered all the basic baddies in a world - there aren't any special one-off ones, so you know pretty much what to expect after the first few screens; and (c) the way the game seems slightly uncomfortable being both a cute platform game and an all-out Walker-style 'triggerthon' (as Cam would say) - it doesn't quite go to either extreme, and some meaty gun-reloading noises might just have helped the atmosphere click into place. Nothing too serious, though, eh?

As long as you're prepared to suffer for your art, Ruff 'N Tumble is one of the nicest games around at the moment. In a nasty sort of way.

Uppers: Firm but fair - every inch of it has been designed to test you to the limits. Impeccably put together, with deliciously slick graphics and great sound effects (when they're not being drowned out by the awful music).

Downers: Many people could find it too difficult, and be pushed to acts of retaliatory violence.

A brilliant game that's clearly been put together by people who care about getting it right. You'll get angry with it, but all you'll be able to do is wag your finger at it and say, "You... you... Oh, all right then. My mistake."