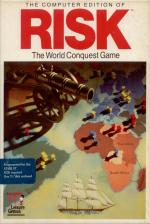 Translating a board game into a half-decent computer romp is one of the hardest challenges for any programmer: not necessarily in terms of skill but in the sheer tenacity required to hang on to the coat-tails of the predecessor and retain its addictiveness.

The majority of board games rely exclusively on the interaction between you and your mates for interest. Throw in the added allure of luck, in the form of tossing a dice, and you have a game that doesn't take kindly to computer clones. When the opponent is your ST and also throws the dice, it's like playing against your worst enemy and letting him decide what the score on the dice should be.

Despite the odds, Leisure Genius have undertaken the task of converting the classic board game Risk from its cardboard original to the pixel-packed monitor of your ST. But can the computer version be as challenging as the original?

Intended to be a game of strategy, Risk is a megalomaniac's wet dream. It involves eliminating your opponents by smashing your way through territories on the path to world domination. To achieve this awesome feat, you have a number of armies to position across the 42 countries on the map. By concentrating your power in localized zones, you can march forward tyrannizing neighbouring countries.

How you position your armies at the start has a major influence on the outcome. The game can be played with up to six opponents, any of which may be played by computer or human. Depending on the number of opponents you choose, you'll receive different sized armies: two players get a handout of 40 armies, six receive half as many. Positioning them all takes aeons, but once finished, you're into the game proper.

Using armies from one territory to attack those in an adjacent territory you gradually attempt to extend your dominance over the entire world. You can perform many such attacks within each turn, earning one RISK card each time you conquer new ground. As you build up sets of RISK cards, these are traded for extra armies that can be placed in any territory under your command.

If you've planned your strategies well, you should end up wiping an opponent off the map - in which case you're bestowed with all the RISK cards in his or her possession.

At the end of your turn you can fortify your position by moving armies from one territory into an adjacent territory. This tactical redeployment can only be performed once in each turn.

The game ends only when you've taken control of the entire map. The computer version has the added bonus of a neutral player who occupies areas of land but only plays a defensive role. If the land comes under attack, the computer fights hard to hold onto its territory.

The playing screen faithfully reproduces the famous Risk map. Since it's impossible to cram the whole map onto one screen, you use the mouse to bring different areas into view. It's responsive, but there's little detail on the map to rave over. Sound effects are even more limited, consisting solely of the occasional beep to let you know how your land is shaping up.

Risk might have been about global conflict but it was never an earth-shattering board game. Its only real claim to excitement was the way you could play with half a dozen friends and bully each other into submission. Can you imagine six friends trying to crowd around the computer screen? The thrill of the board game is lost because it's physically awkward to play on the monitor. Combine this with the ST tossing the dice and you can kiss goodbye to the last remnant of laughter.

Costing twice as much as the board game, the computer version plays as a simple strategic wargame with cards and rolling dice deciding territorial gain. If you found the board game a thrill, this version is still going to excite, but wargame strategists and board game addicts should play safe and steer well clear.

This doesn't really work as a computer game. The thrill of the board game is lost because it's physically awkward to play on the monitor. Combine this with the ST tossing the dice and you can kiss goodbye to the last remnant of laughter.