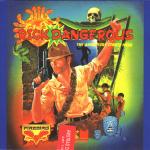 By now you have probably all seen Indiana Jones Part III and I would think there are plenty who seek that kind of excitement in their lives.

Cute Rick Dangerous will provide you with that excitement. He has to dodge so many traps, kill so many people and survive so many adventures.

Little Rick has to cope with four adventures yet he does not need his father's help to complete any of them.

The action starts when Rick carelessly crashes his aircraft over the Amazon jungle. Having seen a band of blood-thirsty tribesmen, he manages to grab a large stick, a gun and some dynamite before he is running frantically into the unknown depths of a cavernous temple.

At that point we have to take control of our hero: the first task is to prevent Rick being splattered by a rolling boulder twice his size. From then obstacles, spikes, death traps and flying spears come thick and fast. There is an abundance of tribesman all fighting to save their society from the relentless spread of western civilisation, all wanting Rick dead.

He has to avoid contact with any of the nasties. He has many options, for he can jump or crawl, prod, shoot or lay dynamite. His ammunition supply is limited; more can be discovered around the maze. Tribesmen can be killed using only the stick. Bonus icons are also about to boost one's score. Rick, who resembles a Weetabix man, starts the game with seven more lives than Harrison Ford will ever have.

Many more are needed to complete a stage. The traps are numerous and unpredictable but each trap, once beaten, is easily beaten again. The game is not boring; this fun arcade adventure has some 85 screens on 8-bit formats with an extra fifty screens on the 16-bit formats.

In a traditional platform-style game, Rick jumps gaily round the screen from ledge to ledge. On escaping the jungle, he is sent to help the British Museum to recover the priceless Jewel of Ankhel. It has been stolen by a group of fanatics who threaten to destroy it until a ransom is paid. The pyramid contains many more horrid traps; the Middle Eastern characters are far from friendly.

For the third level we become intelligence agents, beating guards, cracking security systems. Life in this castle gives Rick no time for resting.

The story ends with Rick against an army in an attempt to prevent an enemy missile attack on London. Saving London from a fate even worse than a tube strike is entirely in Rick's hands.

This is a great little game: the graphics and sound effects are simple yet good, the movements and character control are precise. It is fun from the start and the enjoyment lasts: it even managed to take me away from Tetris for two hours. With 74 types of traps and enemies you will have fun with this one.

With 74 types of traps and enemies you will have fun with this one.