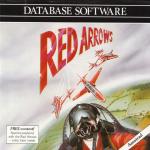 Anyone who has any interest in aviation will have heard about the crack aerobatic team - the Red Arrows, I have seen them several times at various air displays, and with my experience in formation flying and aerobatics, I can say without doubt that they are absolutely magnificent.

Having been invited to write a review on 'Red Arrows' by Database, I could not wait to load the program and have a go. Having flown almost every flight simulator for home computers, (and some bigger Redifusion ones) I looked forward to using a program that would, hopefully, live up to its name.

The version I test-flew was on cassette, and one side of the cassette failed to load after displaying a nice pair of Red Arrows. I don't know if the disc version has been produced yet, but, in any case, faster loading is something that everybody appreciates.

Half the manual for Red Arrows gives you a history of formation aerobatics and the Hawk's performance. Having been warmed up in this way, it is disappointing that the second half gives a very poor explanation of flying characteristics and exploitation of the aircraft. All those 'one key toggles' and 'building thrust against brakes so that you continue with the same overall thrust' are a bit daunting at first; and some of them stay so.

The graphics are nicely done; you can see the rest of the formation, and have a lovely view of the cockpit. Your instruments include a 3-dimensional plan of every individual figure, with your trajectory as a separate curve. The speed is something that leaves a lot to be desired with this simulator. 'Fighter Pilot' by Digital Integration, is a good example of a beautiful performance on a true 8-bit home micro.

The figures you can fly in formation are of the best ones that the Red Arrows perform: the Big nine loop, the Pyramid roll, the Eagle Manhattan Loop, the Viggen Flypast, the Concorde flypast and it is left to your imagination to do any solo aerobatics that you can think off.

The response on the controls is very sluggish, and it does not vary with airspeed. The stall warning is a very interesting feature, tilting the aircraft from side to side.

The idea of a flight simulator is very good one, but I am afraid to say that the realisation of this marvellous idea has not been absolutely successful, If you want to have some fun, however, and say that you were flying in formation with the 'Big Nine', this is the program for you.

What is worth mentioning is that in the instruction booklet there is a competition entry form; and the prize - a weekend with the Red Arrows, overnight accommodation a a luxury hotel, a visit to the wartime home of the Dambusters, photographs with the Red Arrows team and in the cockpit of a Hawk. Also, a percentage of the revenue from sales of this game goes to RAF charities.

The idea of a flight simulator is very good one, but I am afraid to say that the realisation of this marvellous idea has not been absolutely successful.