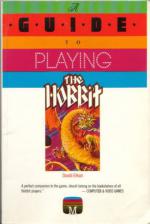 Having dealt in detail with the film of the book, computer adventures have now begun treading the territory of the book of the film. This book, inspired by JRR Tolkin's myths, is the answer to every frustrated Hobbit fancier's dream, and will also be useful to help out the odd computer journalist struggling under the weight of unintelligible adventure queries.

Whichever way you look at it, you have to take your hat off to Melbourne House. First the company designs a game complex enough to leave most people stuck inside it, then Melbourne produces a book telling them how to get out of the holes they're stuck in. Naturally, this raises the purist's hackles. After all, what exactly is the point in buying an adventure that'll give you weeks of amusement if you're then going to buy something else that will allow you to solve it in a matter of hours? It's a nice way to make money, but is it ethical?

That said, there is a market for a book of this sort, although ethical considerations would make me feel that it would be better to invest in a guide to playing adventures in general, rather than just a guide to one game. I feel this would smack less of cheating.

By paperback standards the book is also quite expensive. The mere £3.95 may seem cheap for a computer book but if you think in terms of what you'd pay for a major work of literature (such as War and Peace), it's diabolical. On top of this, the bulk of part thre of the book, A Tourist's Guide To The Wilderland, is taken up by blank space.

Still, if you need help, you'll probably find you can afford it. But take it from me, you can hang in there, do The Hobbit the honest way, and fight the urge to buy this book.