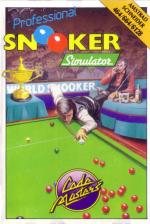 If you're missing the saturation snooker coverage on TV, perhaps you'll be interested in Pro Snooker from CodeMasters. Computer snooker games tend to be judged on the way they interact with the player; things like ballistics and graphics have just about. been standardised by now.

Each player has a separate key to shoot with, otherwise the controls are the same for both. The cue always points at the cue ball, and can be rotated around it in either direction at speed or with a degree of precision.

As well as the picture of the snooker table from the top (as always), there is a diagram of the player's (sorry, wrong budget label) eye view of the cue ball. This shows both the precise position where the cue tip will strike and the relative position of the ball behind the cue ball. The former, as any world class snooker player from Romford will happily tell you, is important if you want to impart any spin to the struck ball. Spin control, far from being something to do with the latest advance in washing machines, is what separates the men from the ball boys. The precise point is changed by a cunning combination of the control and the cursor keys. Most of the functions in this simulation are accessed by various Shift/Control plus a key combinations; this makes it more difficult to press the wrong thing at the wrong time.

Functions available include instant replay of the last shot, saving and loading of game to tape, practice mode and conceding the game. There's also a demo mode, where you can admire the computer's consummate skill and never play a shot yourself. A bit like playing against Steve Davis, really.

The game follows the red-colour-red sequence. As the screen is in glorious Mode 1, you might be forgiven for thinking that there aren't quite enough colours to go around. Well spotted! (snooker joke).

Mr Godwin Graham BSc has seen fit to put stripes through the balls which aren't white, red or black so as to identify them. When you've managed to down a red, you have to tell the computer which colour you're going for. Get it wrong, and your opponent gets at least four points, more if the ball you missed was blue (well, stripy black/white) or above.

In best snooker tradition, it's entirely possible for someone to win by committing fewest foul strokes. If your opponent misses, you have the opportunity to make him take the shot again.

There's a practice mode, where the balls can be shuffled at will, so you can make all those embarrassing mistakes time and time again until you get it right. Then you can move to Romford.

Professional Snooker Simulator, eh? Does it simulate the bank balance incrementing when you win, the shock horror exclusives in the tabloids when you lose, the drugs in the dressing room anyway?

More to the point, does it play like a real table? No, no, no and yes. It takes a bit of getting used to, but the action's OK.

Not having any joystick option is a bit off, and the keys take a bit of getting used to. I think the CDS simulation has the edge on general niceness. though.

A snooker game? How original, I have to admit that I fi nd all snooker programs boring, preferring to nip down to my local club and wait for a real table. At least I can play Jailbreak on the arcade machine while I wait.

With Alex Higgins in the Amsoft corner and Steve Davis playing for CDS the last thing the world needs is a third contender, even if it is budget, give it a miss.

How do you play snooker with only four colours? Simple, you use patterns to identify the values. This means that you can have a more realistic-looking screen with balls which actually look round.

But CodeMasters have messed even this up by producing a tiny table. Even at budget prices this is too expensive.

A snooker game? How original. With Alex Higgins in the Amsoft corner and Steve Davis playing for CDS the last thing the world needs is a third contender. Even if it is budget, give it a miss.