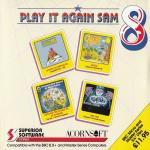 The first of the three games written by Tony Oakden and published by Superior Software, this is a graphical adventure in which you, Walter Cobra, adventurer extraordinaire are drawn into a mysterious and magical world, which incidentally you discover by jumping down a wishing well, which it said to do on a map which you found. The object you seek is 'The Golden Dragon'. Having jumped down the well, you remember one vital thing you forgot - the map. Oh well, as most good adventurers do anyway, you have to stumble along and find the Gold Dragon without the help of said cartographical aid.

The game comprises over 90 graphically different scenes, with many puzzles, and lots of blasting to be done to complete the game. There is quite a lot to be done in this game, apart from finding the Golden Dragon you also have to get the 12 power crystals and also destroy 3 reactors.no mean feat indeed! This is a feature packed game, and the best feature being that you have a jet pack which you can use to propel you through some of the screen, however they only work on screens with a special triangular mark, and a technique must be developed of cruising through screens which you cannot use the jet packs in, by firing the pack on a screen which you can. There are many different enemies which you encounter, each having a different level of toughness, and requiring more shots to kill. It is quite hard at first, but once you learn that shooting is not the best option, then it becomes easier to traverse the levels. You start the game with a certain amount of energy which must be replenished, and also you have to fight against time. The puzzles in this game are hard, and there are lots of them, it helps to make a map!

The graphics of this game are nice high-res ones, with lots of nice colours, and fluid action. You can't really fault the graphics and they are perfectly done for the type of game really. The sound is to put it mildly, weak, with only a few sound effects and absolutely no music, which would have really added to the atmosphere! In general, gameplay is spot on, but perhaps there is too much needless shooting, as there are already enough objectives without having to kill and dodge things as well!

This game is originally by Tynesoft, but republished with their permission on the disk, it is typical of the type of games which Tynesoft produced, i.e. it is a sports game. You compete against up to 3 opponents, and the winner being the one who has the most gold medals from the events before (or if two players have the same amount of golds, then it is the one with the most silvers). If you have no friends, then the Beeb will help you out by playing the part of them.

The game has six events, the Bob Sled, Speed Skating, Ski Jump, Giant Slalom, Ski Slalom and the Biathlon. Rather than choose all skiing or all off-piste events as most programmers choose when they make games like this, Tynesoft have gone for a rather nice combination of events, not one actually has similar gameplay to the others. As is a feature of most athletics games, this one features the fabled finger-tapping! If you don't know, this is where you have to rapidly press two keys in rhythm, one after the other, it definitely brings a whole new feeling of realism - by the end of a lap of speed skating, your fingers feel as if they've been speed skating in real life! This is more fun than it sounds, especially if playing with friends, you need endurance! The six events are nicely different, some requiring finger-tapping, but most not. The biathlon is my favourite event on the disk, you have to use finger-tapping to ski, and then at regular intervals you need quick reactions to hit the targets on the shooting range. The best feature of this is that when you reload your gun, instead of using a computer generated sound effect, the tape relay clicks on and off, which sounds quite realistic, well better than a computer sound effect anyway! Probably the worst event is the Ski Slalom, as the posts just come at you from nowhere, with hardly any indication of where the next one will be!

The graphics are quite nice on this game, they are low-resolution high colour modes though, and this creates some nice graphical effects. There are a lot of nice still pictures on this game though, and a lot of animation is not really required. It all moves around nicely and is very fun to watch. Another good thing is the sound, at the end of each event you get the nice ski-Sunday tune, which is actually done quite well! The game is difficult to play, and although I won one gold on my first go, it was more by luck than judgement, and I did absolutely crap in all the other events! Good fun for one, better for two or more.

Ahh, always the highlight of any compilation, a Repton Game, this was the first new set of screens for the Repton 3 game, and features 40 levels for the little green beast to show what he's made of. Played in a variety of settings, including America, The Arctic, The Orient, Oceania, and Africa, the levels are nicely designed and varied.

Although this game offers nothing new in the way of gameplay, it is still fun to play, and the new graphics screens offer a lot to the game, it works if you have played the original, and even if you haven't. For those of you who don't know about Repton, it is basically a game where you as Repton have to collect diamonds, and dodge rocks. The puzzles are mainly to do with the way rocks are laid out, but there are others, such as monsters who chase you if you crack the egg they live in, spirits who must be guided to their cages to turn the cages into diamonds, and fungus which must be kept at bay to stop it taking over the entire screen. This is great fun to play, and you can play it at whatever pace you like, from those people who love to just think the whole level over before they play it, or those who go at the levels like a bull in a China shop, it will have universal appeal. The thing is though, that on later levels you cannot view the maps of the levels, making the game much harder! A password scheme is included so you never have to start from the beginning, and there is also an editor with the game, which allows you to create your own new levels, even using your own specially designed graphics!

The graphics of this game, although low-resolution are very well done, and it seems as thought every trick in the book is used by the programmers to get the game to work at its optimum speed. The whole thing is very graphically intensive, and it is great that it is animated so highly and all seems to work together so well. The sound is also good, a nice pleasant tune plays away in the background, and the one gripe I have is that the 'ping' sound when you collect diamonds is a little shrill for my young ears! You can't go wrong with gameplay like this, and the editor offers unlimited level creation, you can have hours of fun designing levels!

This is something of a strange game from Superior, strange in two ways firstly because it is rather an odd one out on this compilation, and also because it is actually a worse arcade conversion than one done by another company, this is very rare for Superior. It is based on the old Mr Do! game in the coin-op arcades, basically you are Mr Do, and you have to collect the cherries which are buried in the soil, by making your own pathways through it. The aim is to collect all the cherries on the screen, but this is made harder by the fact that you have to outrun the bad guys who chase you around the pathways you make, and some even make their own. The reason it is just not as good as the other game (Mr Ee! by Micropower) is purely a matter of the graphics. In Mr Ee! you get nicely designed really colourful characters, and this one looks rather dull in comparison. The gameplay is hardly complexed, so it is no surprise that both games play pretty much the same, and when something like this happens you have to go for the graphics of a game, and Mr Wiz sadly loses out. Superior can be forgiven though, as it was one of their earliest games, and also you must remember that Micropower had been doing games for several years before Superior, and they were eventually overtaken.

As I have stated, the graphics in this game are none too hot, they are, shall we say, functional. Being in a low-res mode, they are never going to be the pinnacle of high definition, but the colours used are quite nice in a barren sort of way. The sound is adequate, though not extravagant, it is not too annoying either. The gameplay is good, and just what you need, some mindless moving after a hard days work.

Overall, this is a nicely put together compilation, and the games really do complement each other, a nice mix of strategy, fun and puzzle solving make this an ideal compilation if you like all sorts of games.

The games here really do complement each other; a nice mix of strategy, fun and puzzle-solving make this an ideal compilation if you like all sorts of games.
Logout