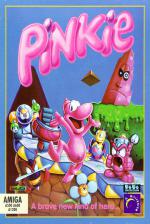 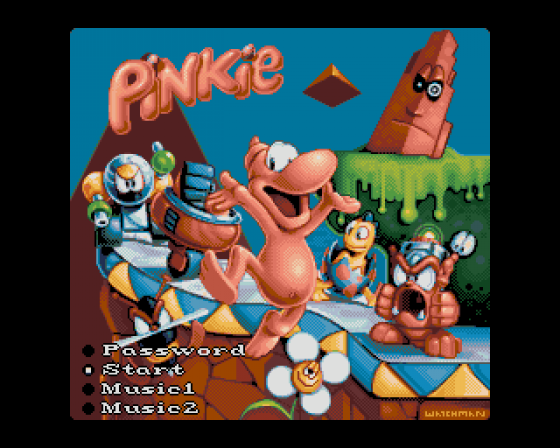 Pinkie! No! As Little Sister sang

Everyone's out to rip you off. The sinister corporation behind Amiga Power, for example, which compels us to carry enormous 'house ads' for their 'other' magazines, implying to you, our readers, some sort of Amiga Power seal of approval. In fact, we don't even read these 'other' magazines. If something's wroth reading, we'll tell you about it without any kind of prompting from our evil mega-global corporate paymasters.

Similarly, software publishers don't play it straight. Recently there's been an alarming tendency either to hold back review copies until the game has gone on sale (as Team 17 have done with Kingpin and ATR, for example) or just not to send us review copies at all, as happened with Akira, Vital Light and, yes, Pinkie. Were we stupid people we could put this down to a regrettably oversight, but we suspect it's because the companies want to sell off as much of their stock as possible before our *review that are always right point out the truth*. Do not buy a game until we've reviewed it. We implore you. For the sake of your souls. 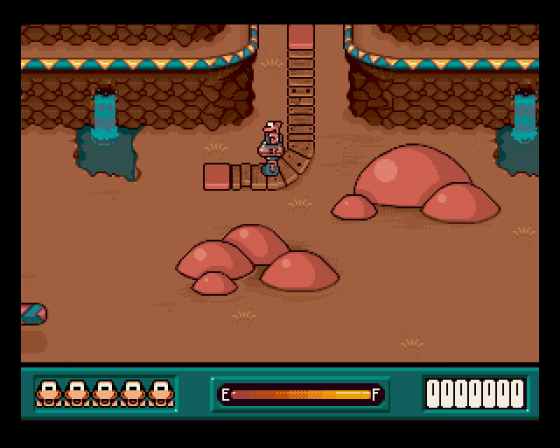 Pinkie, then. Cursed with the worst instruction manual since that of Populous, it turns out after about an hour's hard work to be a commendably lame, excitingly complicated, endearingly characteered, chicken socket fridging tedious platform game. Eggs are hidden on the levels and you have to drive around in your car and find the eggs and put them in your car and drive to the exit and buy items to upgrade your car and fight end-of-level monsters and go to the next planet and if you lose your car you have to buy another one and so go back a few planets and collect more point bonuses and lives and ugh ugh ugh.

The impressive bits are the car (it can do everything from 'swim' to 'extend' like the suit in Robocod), the eggs (if you drop them, they hatch and make a run for it) and the way that everything in a level affects everything else (so if, for example, you leave your car lying around, while you're off on the other side of the planet chasing an egg a monster's going to push it off a cliff).

The unimpressive bits are the mind-numbing tedium (the empty levels make getting lost pathetically easy), the scrappy collision detection, the way that when you're in your car you're invincible so you just drive everywhere right up to the point where you have to jump out and pick up an egg whereupon (thanks to the inability to see beyond the boundaries of the screen and the scrappy collision detection) you get killed by a passing monster and have now lost your car (it being on a ledge unreachable without itself) but have to make your way back through the levels to the depot manually rather than (say) automatically restarting at that point, the Kangaroo Court-catalogue mechanics, the mind-numbing tedium and the way it's made me so furious I can't think of anything clever to write and have instead had to do yet another bald, single-sentence list of faults and annoy Steve the Prod Ed.

We had, in the end, to go and buy Pinkie, and so have experienced in full the misery of owning a feeble and worthless game. We pass on the benefits of this miserable experience to you. Heed our words.

Uppers: Commendably 'odd' multi-purpose car with well thought-out controls. I liked the bit where, if you run Pinkie around for ages without stopping, he puffs and pants forlornly. You can start from any level. You can drown Pinkie.

Downers: Doesn't recognise a second drive. You can't turn off the music. 'Up' to jump. Slippy-slidy ice world. Leaps of faith. It's huge and sprawling and empty and listless and pointless and dull.

There's a lot of Pinkie, but nothing to it (if you see what I mean). Wretchedly unsalvageable platform nonsense.

There's a lot of Pinkie, but nothing to it. Wretchedly unsalvageable platform nonsense. 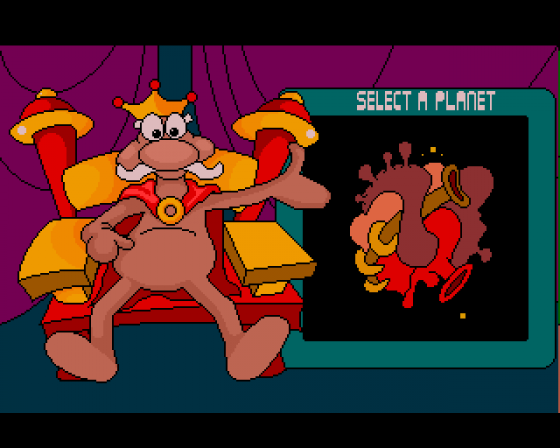 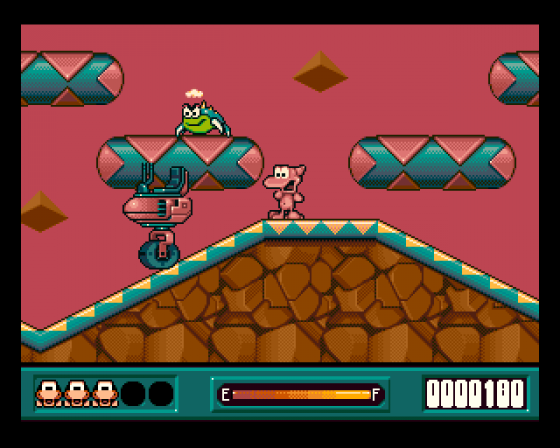 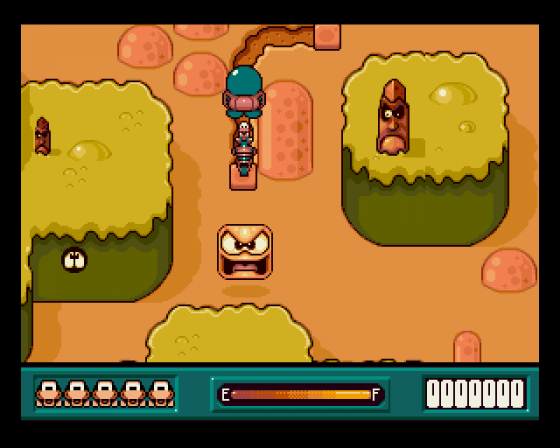 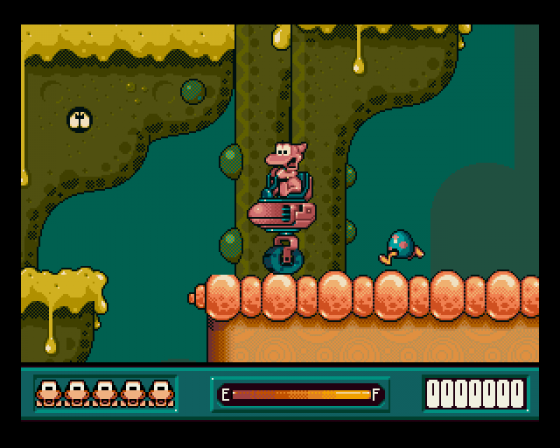 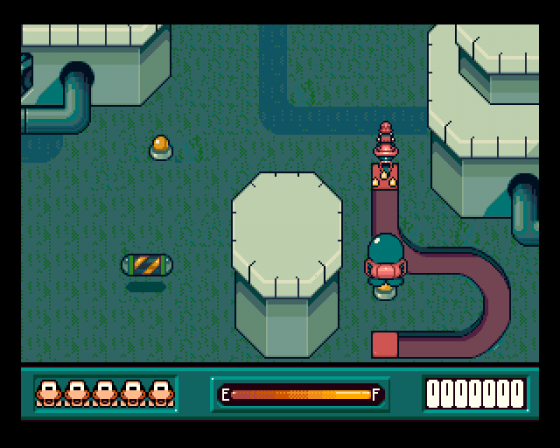 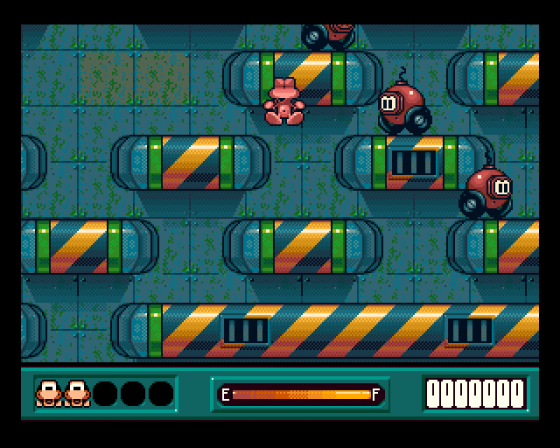 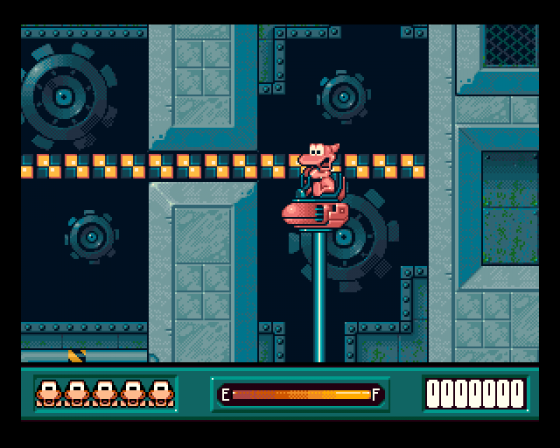 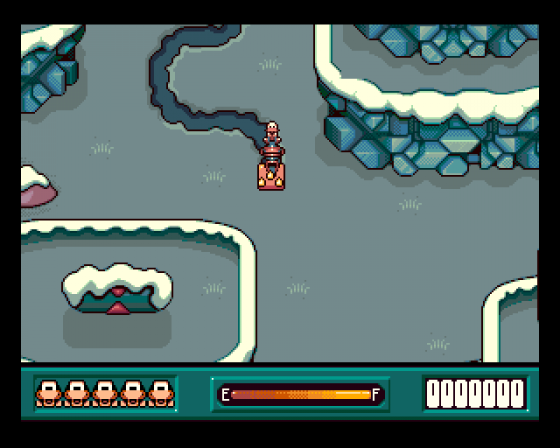