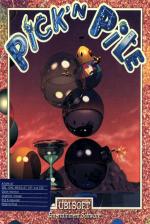 Nostalgia ain't what it used to be, but over the last few months there's been a noticeable throwback to the old 8-bit days with games like Astate, Blockout, Plotting and Manix. They're incredibly simple, offer visuals that are far from state-of-the-art and certainly do nothing to tax your ST, but they're remarkably playable and addictive. Now here comes the latest in this mould, Pick 'N Pile, all the way from France.

Typically the objective is mind-bogglingly simple. The game is played with steel balls (ooer) of varying colours, and the idea is to pile them on top of each other to clear the level within a set period of time. Pile up a column of balls and you rake in a massive score - but this isn't as easy as it sounds. Solid steel balls, you see, have a tendency to roll all over the place, so you need to stack them up against immovable bricks. These and other bonus objects pop up throughout the levels. When you reach more advanced levels bombs start appearing within the group of steel balls. When they explode they take out up to eight balls in one go.

Pick 'N Pile offers two modes of control: either the mouse or joystick. Go for the first - provided you don't have a sticky mouse, it gives you much faster control.

Technically there's little to the game which would've taxed either the programmer or the graphic artist. The steel balls are a solid single colour with no shading, and when you drop them there are no fancy visual effects.

Sound is better. As the timer clicks down its ticking grows faster and faster to give you a sense of urgency, and when you drop balls on top of others there's an effective clanging sound.

Pick 'N Pile is certainly fun to play for a while, but where it falls short of its nearest rivals like Plotting and Manic is in its simplicity. Not only is there a marked deficit of exciting effects but the game itself is just too easy. While the time limits are certainly going to push you hard, you won't find anything tricky about dropping one ball on top of another. In the harder levels the only strategy for success is to move the mouse as fast as you can and employ bonus objects whenever they appear. Not a very demanding strategy, and not one to keep you absorbed in the game for long either.

Certainly fun to play for a while, but where it falls short of its nearest rivals like Plotting and Manic is in its simplicity.