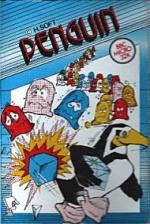 The idea of Pengo is to kill the creatures known as Snobees, by crushing them with cubes of ice, before they kill you. At the same time, your main aim, apart from staying alive, is to push three special blocks together for big bonus points. The longer you take to get the three blocks together, the fewer bonus points you gain.

This version of Pengo has transferred quite successfully to the BBC Micro. The graphics, sound and speed are very good, although our copy was very fussy as to which ROMs were installed in the micro at the same time.

The music with this game is particularly noteworthy, and the key response is the best I have seen for this type of game. Unfortunately, the game is spoilt by the occasional corruption of the screen display that takes place, though this seemed to be dependent on which ROMs were installed in the micro at the same time. Nevertheless, this is an annoying feature when it occurs.

The second of the Pengo games reviewed this month comes from Superior Software and is one of six new releases from this company.

Once again, Percy Penguin is trapped in the snow maze, trying to push the special bonus blocks together, and still trying to avoid the Snobees.

This version is not as graphically stunning as Penguin from H Soft, but runs much better, with no problems over conflicts with any ROMs. There is also a time bonus on this version for completing a sheet quickly.

If it were not for the occasional corruption of the screen display then Penguin from H Soft would be the choice here. We were unable to determine the exact cause of the problem, other than it seemed related to the selection of ROMs in our office machines. In the circumstances, Percy Penguin from Superior Software is a reliable if slightly duller choice.

Not as graphically stunning as Penguin from H Soft, but runs much better, with no problems over conflicts with any ROMs.