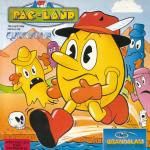 One way or another, each and every one of you reading this will have played the classic of the Eighties, Pac-Man. How many of you can actually remember pumping quids and quids into those stand-up arcade machines just to gain control of a yellow blob whose only pleasure was to gobble fruit, dots and wreak revenge on those ghosts.

Mr. Pac has been the star of many a game, most of these being Pac-Man clones, although more recently we have seen Mr. Pac taking roles in the 3D game PacMania and now in the arcade conversion of Pac-Land.

Pac bounces back in a new scenario. Gone are the days of running around a maze, munching dots. Mr. Pac has metamorphosed since you last saw him and has taken on arms and legs plus a large nose. He has also been to Burton's and bought himself a pair of boots and a matching red hat. He no longer lives in a maze and now resides in Pac-Land, a nice homely town with no maze in sight.

One day, while walking along the main street, he stumbled across a lost fairy who unloaded her problems on to Pac, who, being a kind soul, agreed to escort her back to Fairyland.

The journey from Pac's hometown to Fairyland is a treacherous one, and is not for the faint hearted. Once out of town, you are into the wild wilderness. On your travels, you must navigate deep ravines, cross high mountainous regions and fight your way through dark forests.

The game is based on the platform idea, where Pac is walking from left to right, jumping over obstacles in his fight to reach Fairyland. These obstacles can be either static or motional, by this I mean ghosts.

All four of these, far from charming, creatures are on the loose again, not having learnt their lesson the first time around, they are back for more. Binky, Pinky, Inky and Clyde are all out on the rampage. Some on foot - well, float - and two in motorised vehicles, these being a plane from which small ghosts are dropped upon you and a small car which drives towards you in a suicide mission.

Pac has two walking speeds; slow and Ben Johnson - for that extra boost to get you out of trouble. Like Ben discovered, this can be more hazardous than you first thought.

Pac can still turn nasty on the ghosts by eating the power pills and attacking his assailants, whose eyes depart from their bodies and exit the screen.

Screen change is performed by a glorified page flip, where the new screen scrolls down over the old. It is unfortunate that the game does not scroll horizontally as does the arcade version.

Graphically, Pac-Land is superb. The characters move smoothly and the colours are vibrant. The sound is also very good. The gameplay element is one of the best I have witnessed in a long time. All these features add up to make Pac-Land a superb arcade conversion. Grandslam has something to be proud of here.

Graphically, Pac-Land is superb and a superb arcade conversion... Grandslam has something to be proud of here.