﻿ Stars Of The Screen | Everygamegoing

Geof Wheelwright looks into some recent developments in display technology.

Geof Wheelwright looks into some recent developments in display technology

Adam Osborne thought he'd re-invented sliced bread (or at least had a good run at re-introducing the crumpet) when he unveiled his sewing-machine sized portable computer a few years ago.

And he wasn't far wrong. In the size of a briefcase-cum-suitcase the illustrious Mr. O had managed to fit two disk drives, an entire Z80-based computer and a small built-in CRT screen.

Looking back on that achievement, it was neither the size of the disk drives, nor the small board that really surprised anybody - the motherboard of the Apple II wasn't much bigger and neither were its drives. It was the inclusion of the screen (and, of course, the bundled software) that took people aback.

Here, for the first time, was a truly portable computer available at a price lots of people could afford and in a size they could (barely) handle. You only needed to fold down the front panel of the machine, plug it in, and presto, the screen would come to life and your Osborne was ready for work.

The screen was a bit small, the character grid non-standard and the keyboard a bit naff - but the Osborne 1 soon developed a devoted following of portable revolutionaries to whom these shortfalls were but mere eccentric peccadillos.

After all, what other computer could you just plug-in and use without having to haul around some silly 12" screen? 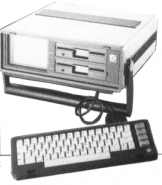 A Colour TV in Commodore's SX64

As with the leader of many a revolution, Osborne soon found he was the flavour of the month (later to become disk of the day) in an incredibly fickle year. Third-party suppliers started doing 80-column screens for his built-in CRT, other companies (such as Kaypro) started to imitate and undercut his small-screen wonder, while yet others discovered that many dollars (and pounds) were to be made in wrapping an Osborne-style box around IBM PC compatibles.

Perhaps the cheapest new machine to use a built-in CRT is the Commodore 64 portable - the SX64. It's also one of the first portable computers to incorporate a colour picture tube. It uses a 5" colour monitor - which looks to be a souped-up US colour TV tube. While this allows you to display the colours in various games, it makes things difficult when you're doing something like word processing and you need the hard contrast and definition provided by a high-resolution monochrome monitor.

Commodore's move is therefore unlikely to cause a trend toward colour monitors being included in portable computers as it's both difficult to get good resolution and a good price on them. So if you stick in a colour monitor that's going to be good enough for business use, it's going to make your machine too expensive. On the other hand if you go for a low-resolution TV monitor with a good price, you'll hardly be able to read the text.

Meanwhile in Japan companies such as Epson and Kyocera were having other thoughts about what a trult portable computer might look like - and again the essential component to make the picture complete (if you'll excuse the pun) was some form of built-in screen. When designing their telephone-book sized portables Epson and Kyocera decided to throw out the large, power-hungry and cumbersome Cathode Ray Tube in favour of Liquid Crystal Display technology.

Lap-held micros with LCDs - represented here by the NEC 8201A

Epson used a four line by 20 character LCD screen and decided that built-in microcassette storage and a small printer would fill out the package, while Kyocera looked at a few other innovations. The latter used CMOS non-volatile RAM and built-in applications programs - combined with an 8 line by 40-column display to produce the NEC PC-8201A, the Tandy Model 100 and the Olivetti M-10.

Recently, that technology has been further expanded to provide an 80-column screen on machines like the Gavilan, the Sharp PC5000, the Teleram T3100, the MicroOffice Systems Technology Road Runner and the Xerox Series 1810 portable. 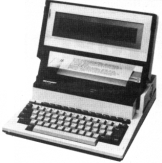 Of those new machines, only the Sharp is currently available in the UK. It uses an eight line by 80 column screen and has bubble-memory storage. But it's more expensive than the Model 100, Olivetti and NEC portables and is somewhat heavier.

The Sharp's screen gives it the advantage of a larger 'window' on your program or text - and it provides a higher degree of resolution (640 by 80 dots). But LCD isn't the only style of flat-screen technology employed by Sharp.

In the upmarket Grid Compass portable, Sharp's electroluminescent display panel is used. It operates by generating orange and yellow pixels that originate in a thin layer of zinc sulfide and manganese sandwiched between two glass panels.

The front panel contains closely-packed verical wires and the back panel contains a similarly packed set of horizontal wires. The wires are as good as invisible to the eye, but together they form a grid which, when charged with electrical field to be established and a wire in the metallic layer to glow.

This technology provides a high-resolution display (240 by 320 pixels) on a 12" by 12" flat panel - but it comes at a steep price. Sharp charges some $300 for the screen used on the Grid Compass.

Electrophoretic displays (or EPDs) use the same two-panel grid configuration as Electroluminescent displays, but have the distinct advantage of retaining information about screen dot locations. The EPD panels contain electrically charged particles of pigment suspended in a fluid of contrasting colour.

When current is applied, the electric field pulls the charged pigment particles to the front of the screen and creates a coloured dot.

In the immediate future, however, the flat screen in affordable micros in likely to be LCD-based. but even here there are a few developments in the LCD field that look set to make them even more attractive.

The new STM IBM-compatible portable micro - planned for introduction in the UK this September - will employ a backlight behind a built-in 80-column screen to overcome the problem that LCD screens have in lacking brightness. This means that even in poor lighting conditions, you should still be able to use your portable (unless it's too dark to see the keys).

One further alternative to LCD flat-screens is the flat cathode-ray tube as developed by Sinclair Research in its new flat tube TV. The flat tube technology takes the standard CRT - which is usually a long, funnel-shaped affair - and turns it sideways, thus reducing the depth required for a TV tube.

In a micro, this technology could be very useful in producing Osborne-style portables that would need to be nowhere near as deep as such machines currently are. The need for depth in existing portables which use CRTs is caused by the fact that for every inch of screen you gain on the CRT, the picture tube needs to be exponentially longer - thus increasing the depth of the machine.

In a flat-tube TV that exponential growth goes sideways so that for a five or six inch screen you could have quite a long, thin box with a CRT at the front of it and a main processor board just behind it. Add to that a folding detachable keyboard at the front of the machine and you'd have quite a powerful portable computer not much longer than a violin case and not much wider than a Model 100 or NEC portable computer.

Now all you need is to have someone build it... Any takers?

Stars Of The Screen