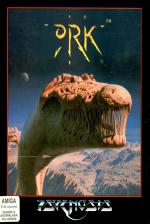 After the slickness and substance of Leander, Psygnosis' newbie disappoints. 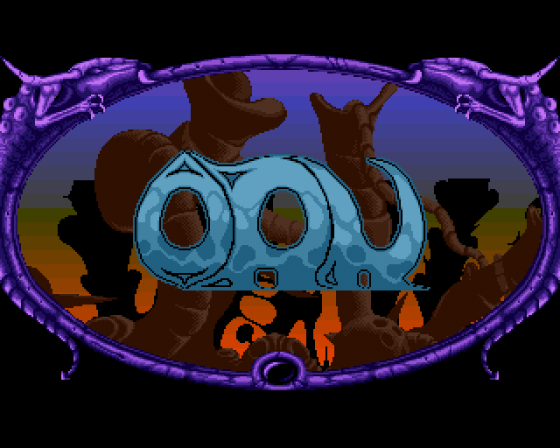 After the innovative genius of Lemmings, the slickness of Leander and the adrenalin-pumping bite of The Killing Game Show, this is a bit of a disappointment. An uninspired (or just busy elsewhere?) Psygnosis have resorted to their well-used parallax-scrolling platform-adventure generator once again, and in doing so have come up with a nice looking game, which fails to excite on any other level. It's not bad, just uninspired.

Okay, so maybe it's unfair to expect great products every time from a company just because it's got a decent pedigree, but sometimes it's hard to help yourself. Playing Ork is kind of like opening your copy of The National Enquirer to discover that, without the make-up, the wigs, the mortgage-humbling clothes, and the big-time tooth-paint, Julia Roberts (if we're being completely honest) looks just like any other gal.

Don't get we wrong, there's nothing actually wrong with Ork, much in the same way that a hung-over Ms. Roberts would still cause a considerable stir in the local chippie. It's just sad that, underneath all the gloss and polish, there's really not much here that could truly be described as special. 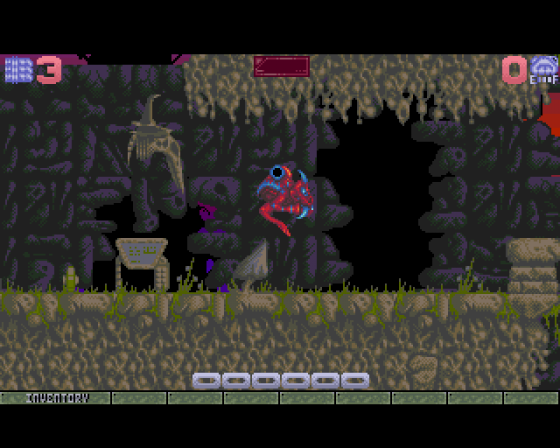 But anyway, let's dissect the game. For a start, the three-layer parallax scrolling scenery would look at home on a Megadrive, and provides an impressive (yet unobtrusive) background for some slick character animation. There's a fair amount of variation in the walk-jump-fall platform-explore-'em-up gameplay too (at certain points you get to zoom about the levels with a jet-pack. Coo!) and there's a decent showing of gameplay 'extras' dutifully dotted around the place in vintage Psygnosis fashion.

In fact, on first inspection you'd be forgiven for thinking there's nothing missing here. Graphics? It's got 'em. Sound effects? Hmm, nothing special - and there's no real soundtrack - but they'll do. Challenge? Well, the game's big enough. Anything remotely inventive? Ah...

And there's the problem. There's just nothing new, ground-breaking or even just plain perfect about Ork. 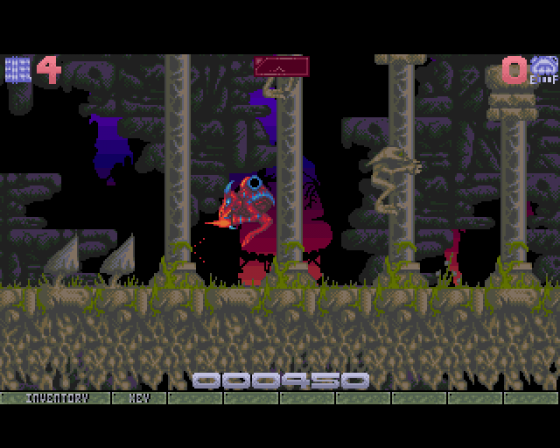 Quickly scan through the instruction booklet, and you soon realise that the game plot is spookily similar to that of The Killing Game Show. That's no real problem, Psygnosis seem to be saying. The Killing Game Show wasn't at all bad, so why not deal up more of the same? (OK, so this time you're an aspiring cadet within the ranks of the Heyadahl space-fleet, as opposed to a convicted criminal. And this time you're facing your final test, in true James T. Kirk style, before promoted to the rank of captain, as opposed to fighting for your freedom, but these are just plot details. The means to your end is the same.)

To be more specific, the means to your end is to wander around a series of platform-ridden levels in search of a key object (or series of objects) that will enable your escape to the next bit. Each level progressively requires more complex exploration, as different items need to be used at relevant points to help with your escape. In other words, the levels are divided into sub-quests that need to be solved in a strict order. Oh yes, and all this in a robo-module that, like The Killing Game Show one, bears an uncanny resemblance to ED-209.

Unfortunately, the similarities start to grind to a halt around here. There's little of the sense of urgency that accompanied Killing Game Show, for instance - there's no groovy soundtrack, there's no 'instant replay' feature (a real shame - why didn't that idea catch on?) and there's little spark. Instead, there are a series of token gameplay novelties. 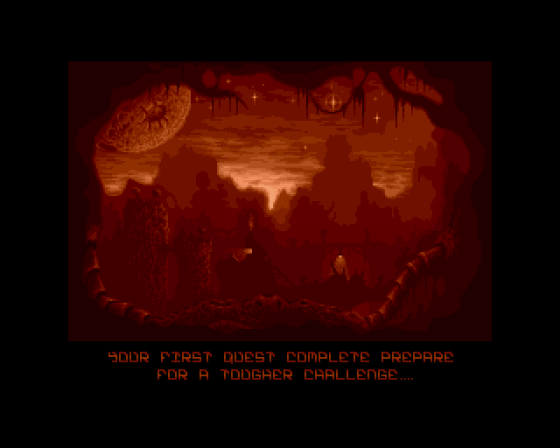 For example, at one point on each level you'll find a computer terminal. Stand behind the terminal, hit fire to boot up, and a whole array of utilities are suddenly at your disposal.

There's the 'object analysis' feature which allows you to submit any unidentified object you may have collected along the way to computer-aided scrutiny. What the terminal's conclusion may lack in Hugh Scully charm and materialistic 'how-much-should-I-insure-it-for?' opinion, it makes up for in practical use. For instance, it will hint as to where certain objects need to be used - and in roughly what order - if your escape bid is to be successful.

This is actually very useful. As the game progresses, you'll find yourself in the possession of all sorts of weird and wonderful objects, but with no clear idea of how to use them. The first level is simple. Find the key to unlock the gold store, then pay the toll-keeper at the end of the level with the gold. Easy enough, but the pilot soon reaches Twin Peaks complexity in later levels as you have to get your head around a whole Argos catalogue of potentially-crucial objects, seemingly littered around the scenery at random. 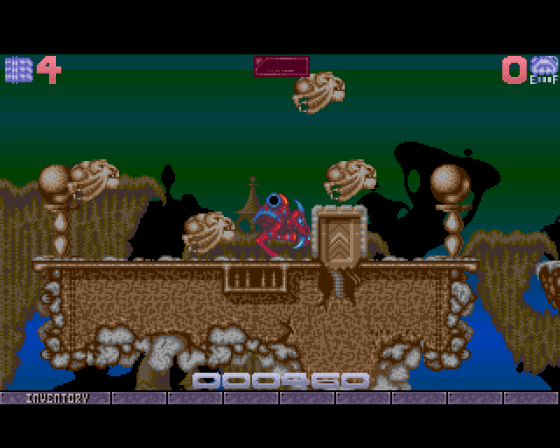 Another helpful feature available at the terminal is a scanner. This will flash up a section of map, helpfully pointing out your location - but only after you've activated the scanner module found elsewhere on the level. There's also a save/continue game option, a life-force indicator and a percentage display of how far through the game you've explored.

And then there's (hurrah!) the jet pack. Your first chance to play with this comes on level two. Fuel is limited (although you can pick plenty more up along the way), so it's a good idea to plan your route in advance. This is fun, and carefully deciding when to get airborne is crucial to success.

We're running right up to the end of the page, so I'd better be brief. The point is, it's all very well, but these few novelties don't really combine to rescue Ork from the ranks of the seen-it-all-before. It's very slick, it plays well and looks good. But that's just about your lot. There's nothing extra to it, nothing special, and although you won't feel ripped off if you buy it, neither will you feel inclined to add it to your list of favourite games. For my money, the game doesn't do the graphics justice - it's mutton dressed up as lamb.

Uppers: The graphics are up to the usual Psygnosis standard, with animation and parallax scrolling to match. The game incorporates a puzzle element as you have to figure out what to use when - there are plenty of gameplay 'extras' to get to grips with.

Downers: But there's just nothing new here. Ork is neither gripping or thrilling, and you get the sense that the programming team have really just been going through the same old (albeit highly professional) motions.

Nothing to fire the imagination, but a slick, finely polished game nevertheless. A poor relation to The Killing Game Show, Ork never comes near to capturing the same spark. It's a shame, but there you go.

A poor relation to The Killing Game Show, Ork never comes near to capturing the same spark. It's a shame, but there you go. 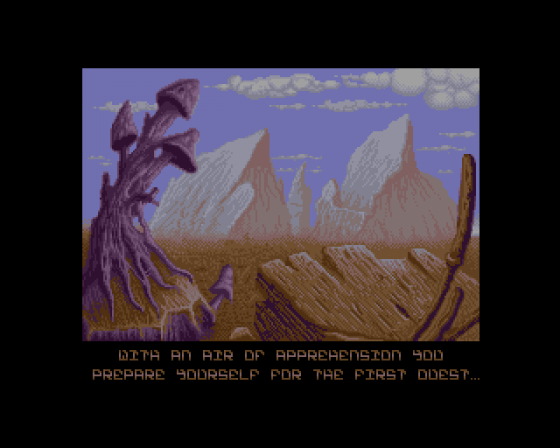 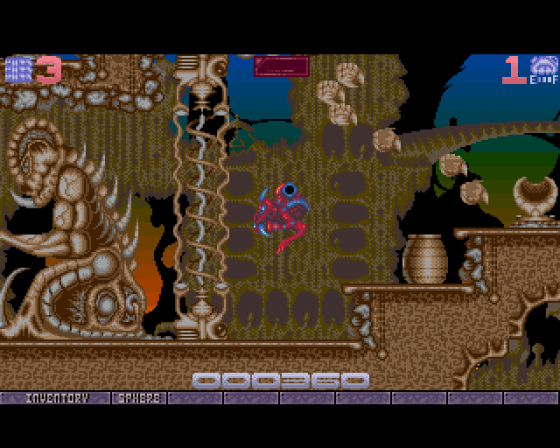 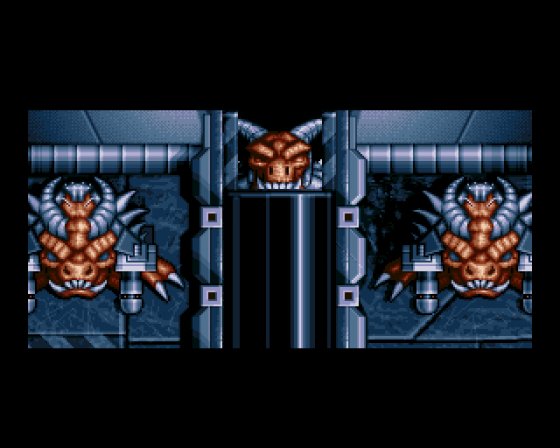 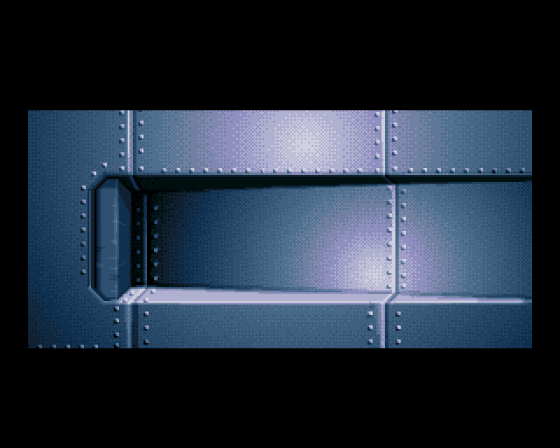 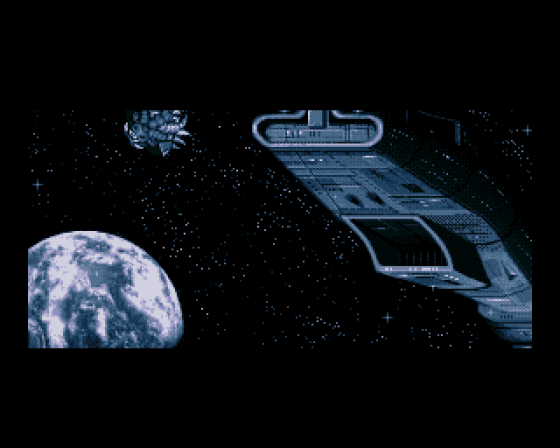