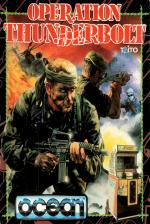 Think back a couple of years and try to remember what it was that brought Uzi sub-machine guns back in fashion. Was it Arnold Schwarzenegger? No. Was it Public Enemy? No. Was it the phenomenally successful arcade game Operation Wolf? Could be...

Operation Wolf placed the player in the role of Uzi-toting mercenary and all-round hard man Roy Adams as he set out to liberate land occupied by rebel forces. After a well-earned rest, Roy is back to solve yet another tricky situation. A DC-10 bound for Boston has been hijacked by terrorists and flown to the Middle East. The hijackers demand that their comrades languishing in jail be released or the hostages will die. The government refuses to succumb to the terrorists and the only option left is to send a rescue team to release the hostages by force.

Roy Adams is just the man to take such a mission, but even he's not tough enough to carry out the rescue alone. This time it's to be a two-man operation, with Roy's old friend and comrade in arms Hardy Jones along to help.

The game begins with Hardy and Roy in enemy territory ready to meet their intelligence contact. To reach the rendezvous point they must run down a street fighting off terrorist attackers. Next they battle to appropriate ammunition and transport in preparation for a jeep attack on the enemy hide-out. The two heroes free the hostages by shooting the locks on their cell doors - which isn't easy when enemy forces are shooting at you!

Once the hostages are free, they catch a boat back to the airport where a passenger plane is waiting to take survivors home. Unfortunately the ubiquitous terrorists have seized the plane, so Hardy and Roy must overcome them once again while taking care not to shoot innocent passengers.

The last barrier to freedom is a particularly nasty terrorist who blocks the cockpit by using the captain of the plane as a shield. You better aim very carefully or there'll be no-one to fly the plane home!

The original coin-op of Operation Thunderbolt was renowned for its large sprites and digitised gunfire effects. Thankfully the ST version has both of these in abundance - it even includes the sampled speech between levels. Unfortunately, the effect of locks being shot off and animals being hit is the same tinny "ping" we've heard a thousand times in lesser games. Why not use sampled effects for these?

Fortunately this slight deficiency doesn't seriously detract from a superbly designed game. The graphics are extremely close to the arcade version in terms of the speed, colour and detail of animation and much of the sound has been taken directly from the original. It just goes to show what can be achieved on the ST if you tap the full power of the machine.

Hardy and Roy collect bonus items by shooting crates that fall by parachute. The crates contain additional pieces of hardware:

Another way of obtaining additional supplies is to give stray animals a quick burst of gunfire until they reveal hidden objects. A bit idealogically unsound, but when you're fighting gun-toting terrorists you have to use everything at your disposal.

Operation Thunderbolt's gameplay is very similar to its predecessor, but the addiction of two-player action means double the fun. Unfortunately, only one person can use a mouse which could cause a few arguments, but with the opportunity for two people to spray bullets at the enemy they shouldn't last for long.

The disk system employed means that sometimes not all three disks have to be used to play to the end. The reduced disk swapping prevents unnecessary interruption of the action.

It's a tough game, but so was the original and Ocean's conversion is very close to its arcade counterpart. The uninitiated may not take to the frantic action, but Roy Adams fans shouldn't miss this at any cost.

Operation Thunderbolt's gameplay is very similar to its predecessor, but the addiction of two-player action means double the fun.