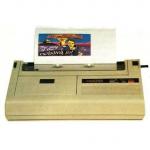 This has to be one of the cheapest colour printers on the market. For your £259 (or £299 for those unfortunates who are not members of the User Club) you get: the printer, colour cartridge, black cartridge, paper, and an instruction manual in a box that ought to stand up to the worst the G.P.O. can throw it at.

Included in the Amstrad version is a printer cable and an 8k buffer inside the printer to boot. The review model also had some software on tape which is to be issued with the Amstrad version. Putting the simplicity and idiot-proofness of the printer to the test, I delved straight into the packaging with screwdriver and plug at the ready and without a glance at the manual who reads them anyway), got stuck in.

Surprise number one was the plug. Nobody puts plugs on things these days - except Okimate that is. I am assured that the one I found on the end of the mains lead was not a fluke (only livers and whales have flukes don't they?), and that they are all actually fitted with one. (That's the plug, not the fluke.)

The standard Amstrad printer lead went in the hole in the side and then it was just a question of giving it some ribbon and paper to eat before getting started.

The ribbons were a piece of cake. Prise open top of printer with thumbnail, push back head, drop in cartridge and shut lid. Look Mum, Clean hands! In fact the whole design of the OM-20 is distinctly modular, with the print head (life of over 10 million characters) and even the main circuit board popping in and out as units. The circuit board modules can be changed for RS232 and Incredibly Big Machines versions. They simply slide in and out. This is just as well because the DIP option switches are concealed on them.

The paper and some acetate film were easy to load in as single sheets after I had removed a small piece of expanded polystyrene from the mechanism. Okimate tell me that this is not fitted to the printer as standard.

Tractor feed paper was a lot more tricky though. The sprockets have to be lined up with the sprocket holes or the machine chews and tears the paper. Unfortunately, you cannot see the actual sprockets on the Okimate because they are under the roller which makes it hard to line up.

Fortunately, the printer does have some registration marks on it for the more common widths of paper. The first time I tried it, it took about four sheets of crunched and mangled paper before getting the hang of it. Once you have done it though, it is much easier the next time round.

The arrangement of putting the sprockets under the roller also solves the perennial problem of having to waste the first sheet of paper because half of it is needed to reach the tractor feed mechanism. With the Okimate, the paper goes through the tractor feed mechanism before being printed on. The tear bar works and cuts the paper in a nice straight line, not diagonally upwards into your text.

On power up, a green light came on and the printer hissed slightly as I fed it a test message from BASIC. Despite the lack of noise, the message was printed out in letter quality. Not near letter quality, but something I would quite cheerfuly write to my bank manager asking him for a largeish loan.

Further experimentation and a good read of the manual (a comprehensive one that is not written in Japlish for once) soon produced the usual 80 cps draft quality, pica, condensed, italics, bold etc. and a whole host of graphics modes.

Whilst timing the draft mode, I noticed what a difference an 8k buffer made, While the printer is still printing out a draft of a document, the more error prone of us can be correcting the text before the last bit of it is printed out. You could also be preparing the next invoice or getting on with a disc back-up etc.

Having gained confidence on the black ribbon, it was time to tackle the colour one. A simple change of ribbon is all that is necessary for colour printing but it don't 'alf look strange when you just list something out on it.

This is due to the way in which it prints colours. As any kid who has splashed paint around or made technicolour messes with crayons knows, with three basic colours you can create all the rest; even if the black does look a bit green. The crayon analogy is fairly close to the Okimate method becase the ribbon is actually a plastic strip coated in wax. The head is a thermal one and melts the wax onto the paper. The printer is therefore a bit fussy about what paper it uses and prefers shiny stuff. Photocopier paper works fairly well, while a print out on ordinary microperf is sometimes unreadable in draft mode. The printer really excells itself, however, in producing colour transparencies on acetate film.

The manual clearly illustrates the method by which the different colours are generated by the printer. The manual was not machine specific and used LPRINT to output to the printer. The examples worked fine when all the LPRINTs were replaced with PRINT £8s and the odd semi-colon was left out.

Anyway, back to the ribbons. The point is that it is not fussy about which colour wax it burns on to the paper. The colour ribbon has a strip of yellow, then cyan, then magenta followed by a clear strip which it uses to line itself up. Print the colours on top of one another and you get eight different ones. You can shade these or stipple them with other colours in a similar manner to which Jill Lawson's pictures are done on screen designer to produce many more different hues.

The only real point against the three-colours-in-a-row method is that it is wasteful on ribbons, which cannot be reused as the wax is burned off. If you only print one dot of magenta on a line, you have had to skip a whole strip of yellow and cyan. These ribbon cartridges are currently selling at over £6 each though a price cut is on the cards.

The screen dump software came on a cassette with high resolution dumps on one side and low resolution on the other. The main difference is that the low-res dump uses half as much ribbon as the high-res. This gives you a maximum of sixteen full colour screen dumps per cartridge which works out at forty pence a colour dump. You use it by running the tape and selecting colour/black dumps and the position in memory of the program which defaults to HIMEM. To activate the dump, you press the control key and the full stop on the numeric pad. A good idea but an RSX would have been a good idea too. Also the black and white dumps are not shaded. The pictures are a bit squashed, but not too badly so. Height-width ratios are always a sore point on screen dumps.

Owners of Amstrads with disc systems need not worry about waiting for it to load up each time because the software had built-in routines to copy itself from tape to tape, tape to disc or disc to disc and was not protected in any way. For the technically minded, the dumps take up approximately half K each of which the first hundred bytes or so are a relocator.

The screen shots in this article were mostly done on the high-res dump which took about quarter of an hour. The low-res ones took only a few minutes. The best way to print a picture from screen designer is to run up the dump you want and type:

And when the picture has loaded, press the dot and control keys.

Another feature of this printer is that all its features are addressable through a seven bit centronics port. This is a common cause of problems with the Amstrad, especially when it is used with the Epson or one of its compatibles and the like which seem to forget that not all centronics interfaces are eight bit. Some of you may know from bitter experience that many functions of your printers are hidden from them due to the lack of the eighth bit, no such problem on the Okimate.

This is not the sort of printer you would use if your main pastime is churning out umpteen page long assembler listings. The letter quality is quite up to daisywheel standards and runs off at a reasonable rate in a number of typestyles making the most effective role of this printer that of producing documentation and correspondence.

The colours are very good and are likely to appeal to the more artistic users such as those creating buisiness charts, printed circuit board layouts and overhead projection films, but could be used for multicoloured invoices, print-it-yourself headers etc. if you can cope with the cost of colour ribbons.

All in all, a specialised and serious product that I enjoyed tinkering with.

A specialised and serious product that I enjoyed tinkering with.
Logout