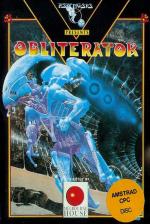 The game Obliterator has finally found its way to the CPC, although one must sit and ponder why. The gameplay was never any good in previous incarnations and there was never enough depth to make playing worthwhile. Now, coupled with bad, jerky, slow graphics and hopeless action, it remains little more than a poor joke.

If this sounds an unfair comment, remember that Arnold owners have seen games like Crazy Cars II, Emlyn Hughes International Soccer and Pacland prove that the CPC is capable of producing stunning games. I will leave the final judgment to anybody also wishes to sample Obliterator themselves but I would not recommend it and I would ask most to steer well clear.

Obliterator is so-called because of the job which you must take on. Some time ago you were the leader of a bloodthirsty pack of merciles heroes entitled, believe it or not, the Obliterators. Unfortunately they have all but disappeared; all but you that is and, as the last of the Obliterators, you have a very busy schedule,

The Federation of Council Elders is now in need of your services and, being a loyal and obedient servant, who are you to deny them? Therefore you stand on a spaceship with only a water pistol to guard you from the big, green things they call them aliens, I think - and with not much chance to stay alive.

The ship in question is heading towards Earth, with the sole task of destroying the Federation's homeworld, Before it does so you must, in your designer boiler suit, shut down its plasma drive and disable the weapons system; there are also shields to be switched off, which is all in a day's work for a dedicated Obliterator.

Already the game has been criticised by some ST magazines as it has appeared previously in 16-bit form. This was done because of the ridiculous control system used for character actions in the form of icons which line the bottom of the screen, each of which perform a different task. I hate to say it but it makes the game unplayable.

The problem is in the selection of the control icons. Movement along these icons is achieved by pushing up and pulling down on the joystick.

This moves the highlight across the icons which can then be selected by pressing the fire button. The disadvantage of this is that while you are selecting the icon you require you have no control over your man and the aliens are quick to take advantage of this fact. The only way to bypass this system is to pre-select the icon you are likely to need and when you hit that tricky situation all you have to do is press the fire button. This means you not only have to think ahead but you also have to get it correct first time, for the aliens are not forgiving foes.

The sound is also bad but the final nail in the coffin is the abysmal speed at which the graphics move; you can even outrun a laser bolt. I was not happy with Obliterator It is the ideal cure for insomniacs with more potency than a mogadon.

This has taken a while to reach the Amstrad... and what a joke it is. Only worthwhile as a cure for insomniacs with more potency than a mogadon.