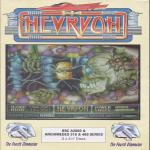 The best way to describe Nevryon is as an amalgam of all the games such as R-Type you may have seen in arcades, and for the most part I found it played up to its hype reasonably well. The basic idea, as in all games of this type, is to fly along a piece of terrain and blow your enemy to tiny bits by whatever means you feel necessary. As you progress, you can earn yourself extra weaponry and shields which include missiles, remote gun droids, lasers, a defender-ram and a 'flamer', which shoots forth enormous tongues of fire when activated.

Your adversaries range from giant tadpole-like creatures to heavily armoured helicopters and there's the odd bat or two in there as well. More than a few features of this game really are excellent - for example, the way rockets and spacecraft ignite their engines and then zoom off.

The smallest details are all there - bullets which miss their targets ricochet off the scenery, and convincing dents caused by misfired missiles. While you are manoeuvring your ship through the hazards of the planet Nevryon, it is sometimes difficult to distinguish background graphics from obstacles - frustrating when you blow up after flying through a pylon.

On the gripes front, it takes a full one minute and 40 seconds to start the game from scratch as you have to go through several slick, but tedious, menus, starscapes and scroll messages. Another thing missing, but promised by the advertising for the game, is the 'beautiful animation' of the end-of-level nasties, which just sit there like nicely drawn lemons.

Overall, this has to be one of the best games yet for the Arc, but my two main criticisms are the somewhat misleading blurb and the fact that a couple of the levels might be too difficult for some people. This is a better than average shoot-'em-up.

Other Archimedes A3000 Game Reviews By Mat Tizard

One of the best games yet for the Arc... and a better than average shoot-'em-up. A couple of the levels might be too difficult for some people though.
Logout