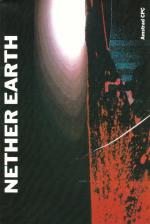 Five aeons ago the Insignians burst up from the Earth's mantle and partook of a little enslavement. Now they dominate the surface, with huge war factories churning out massive warrior robots and other devices of subterranean nastiness. Some of these are neutral, controlled by enslaved humans and likely to support the rebels.

Others are run by the Signies themselves, and will only succumb to a massive assault.

But now, thanks to Captain Fergus McCaffery, there's a small chance that us humans will regain control of the place. McCaffery (the mystery Cap) has gained control of Kerberus, some lasers, motive devices, power plants and assorted weapons.

The first task is to gain control of factories and knock out some robots. These can be kitted out in a number of permutations and then sent out to take over yet more production facilities. The time will come when the robots will be numerous and powerful enough to challenge the Insignians, but for now it's probably best to get supply lines going.

Once a set of small robots have gone out and found the neutral factories, a set of bigger and better hots can be equipped and sent out to take over Insignia-controlled factories. This is where things get much more tricky, as this sort of action is guaranteed to annoy the monsters from the Moho. The final stage involves a set of nuclear bombs in suitably destructive conjunction with those insidious Insignians' war bases.

The game starts out in an airborne reconnaissance unit. This can be flown around the place (depicted in standard isomorphism) to assess the state of play, and can also dock with the warbase to control production.

During construction control, a list of available resources is displayed, and robots can be built from the available parts.

There are various types of weapon and transport, and the choice of electronic defence measures. In general, the more powerful and flexible a robot is, the more resources are used in construction, so careful planning is needed to maximise the effectiveness of production.

Once a robot has been built, it can be programmed to go out and do it to them before they do it to you. It can also hang around and defend a position, move around to fortify an area, or seek and capture i or destroy.) various items of hardware. During the final stages of the war, it might be a good idea to avail yourself of the direct control facility of a large nuke-bearing robot. In this mode, you control the direction and firepower of' the robots directly - their intelligence is otherwise somewhat limited.

During the game, robots can be reprogrammed from the flying flitter. But it does help to have everything planned out from the beginning. Game interface is all joystick and menus, with a spot of direct steering for those tricky annihilation sequences. But definitely a game with more tactics than most.

From the Nether Regions they came, spraying all in their path with a stomach wrenching liquid and showing vile TV adverts. The Insignians had arrived! I don't think the name of the baddies in the game was chosen entirely at random...

The game itself is surprisingly good. The idea of assembling a robot army has been badly done in the past; this is the best and most painless to play version I've seen. Sensibly abandoning incomprehensible icons for wonderful words, the joystick usage is intuitive and (mostly) helps rather than hinders play. Lots of thought has been poured into this game, and it shows.

This is the kind of game that Telecomsoft (Firebird/Rainbird) would put in an expensive box with a book, playguide, and a bit of card and then sell for an arm and a leg. Al! because you have to think before you play. A Sigma 7 view of the planet surface in Mode 1 looks good and I would guess, although I don't know, that this was written by the same programmer as Agent Orange.

Gasp! Argus produces playable game horror! Had to happen one day, and I'm glad I was here to see it. I don't like strategy games much, even (especially) when they're disguised as something else.

This is a bit different, as implementing my careful plan of action (hint; follow the sleeve notes) was simple, nay fun, and watching the results unfold almost enjoyable. Which must translate to you incomprehensible people out there who enjoy such things anyway as a game of incomparable excitement.

A surprisingly good game. Lots of thought has been poured into it, and it shows.