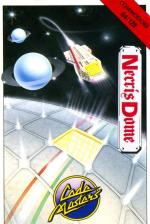 Necris Dome is set aboard an orbiting cemetery, where the Earth's dead are sent for disposal. Against this inspiring background your task is to destroy the Arch-Mandroid who runs the cemetery: he has recently developed a mind of his own and become a threat to Earth.

You start in a coffin and the first sequences contain some twisted logic if ever I saw any. If you return to the coffin you will find there are some gloves inside which were not there before. Admittedly, the inlay warns of this - perhaps the programmer was too tired to correct this little piece of nonsense?

The location descriptions are hardly likely to conjure up those mental images that go to make an adventure a pleasure to play. There are, for example, eighteen described as "RECEPTION LEVEL: chamber N" where N is a number from 1 to 18.

So perhaps the graphics show the intricate detail, you wonder? Wrong! There seems to be four basic chamber designs, all of them next to meaningless and spectacularly lacking in variety of colour. The border around each tends to give the impression that the whole thing has been rather unimaginatively GACked - but there is nothing in the inlay to suggest this.

Ugh! Reviewers should be paid an enhanced rate for being forced to play games like this! [Paid? Whatever next?! - Ed]

Reviewers should be paid an enhanced rate for being forced to play games like this!