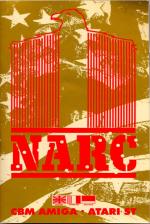 Sunday strolls aren't the quiet affairs they used to be. Take one step outside the front door nowadays and you're confronted with drug pushers on every corner and gun-toting villains roaming the streets. Mr. Big, drug baron and generally evil person, has taken over the town and uses his henchmen to prevent people interfering with his business. That's not going to stop you though! You must stamp out crime, bust the drug traffickers and ruin Mr. Big's day!

You're armed to the teeth too because Mr. Big employs an extraordinary number of henchmen. They're equipped with machine guns and they're not afraid to use them. Vicious dogs are on the loose as well. They're trained to go for your neck and make rottweilers look like the Andrex puppy.

You can arrest the villains for bonus points but it's much easier to pump them full of lead and forget about them - you can always claim it was in self-defence when filing your report. What's more, when you shoot a villain he invariably drops something useful - bullets, a missile, or even a wad of notes.

There are twelve levels of manic murderous mayhem to make your way through. In the last two levels, you're introduced to the wheelchair-bound Mr. Big. However, he's not going to shake you firmly by the hand, so it rather looks like you're going to have to kill him...

The background in Narc scrolls smoothly as you make your way through the twelve stages of the underworld. There is also a very violent rocket launcher which is a treat to watch. Holding down Fire for a second releases an anti-person missile which explodes on impact, showering limbs everywhere. Lovely.

Unfortunately these otherwise excellent visuals are spoilt by the naff choice of colours. The whole game window is very dark and it's hard to distinguish between the background and the sprites - impossible even on Atari's own colour monitor. This is annoying and frustrating because you simply can't see clearly what's on the screen. It's not lack of skill that lets you down, it's a lack of vision.

Narc is potentially an excellent game, offering large amounts of violence to satisfy blood-lust fans everywhere. It's a bit repetitive though, with little variation between levels, and even the most bloodthirsty gameplayer could tire of killing eventually. The really big letdown is the poor choice of palette. The colours are just far too dull and badly affect the gameplay. Such a shame.

Potentially an excellent game, offering large amounts of violence to satisfy blood-lust fans everywhere. The colours are just far too dull and badly affect the gameplay. Such a shame.