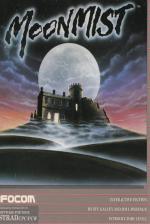 Infocom seems to be making up for its problems with the business side by giving us a steady stream of adventures. One that should have seen the light of day in this column some months ago is Moonmist. For one reason or another it has only now come to the top of the pile. A good thing too, as the latest game, The Lurking Horror, has just appeared - so you have that to look forward to in the near future.

Unlike the above games. Infocom ones are far from cheap, and Moonmist (on disc only) will set you back over £29. Only you can answer the question of whether it is over ten times better to play...

Like all Infocom games, the packaging is excellent with several bits of supporting documentation helping set the scene. You play an American private detective whose friend Tamara Lynd has recently become engaged to Lord Jack Tresyllian, and is staying at his castle in Cornwall. Her first letter was long and excited, telling you of her engagement, describing the castle, its resident ghost and some of the people she had met there. Her second letter was even more frenetic, in this she asks for your help because she believes that someone is trying to kill her.

You have always been firm friends and a plea for help just cannot, be ignored. You catch almost the first available flight across the Atlantic. On your arrival at the castle gates, you are asked for your title, name and favourite colour. The title determines your sex, your name is what the guests will know you as and your favourite colour will decide which plot you will be acting out.

There are four specific plots - red, blue, yellow and green - and each will give you a different adventure with a different story line to follow. Some of the clues, the solution to the mysterious ghost and the castle's hidden treasure will be different. So having solved one adventure you can play another by just changing your colour preference.

Tamara has sent you the guide to the castle that is given to visitors when it is open to the public, so at least you have the basis of a map right from the start. Being old and with walls that thick, it just begs to have the odd secret passage. Could the ghost be travelling that way?

Lord Jack's previous girl friend came to a sticky end by falling down the castle well, and the ghost is said to have a resemblance to her - is there a more scientific answer to these more recent sightings?

Jack's father also died not so long ago, having contracted a strange disease somewhere along the Amazon. Sadly he died before he could pass on the whereabouts of the treasure he is supposed to have hidden in the castle. The Tresyllian finances are shaky to say the least and the finding of this treasure is becoming very necessary. The adventure is classed as introductory level, so beginners and experts alike should be able to enjoy its puzzles and problems. Like all Infocom games, it makes heavy use of the disc drive and nearly all commands have the drive whirring away for 20 seconds or so.

I find this a bit of a bore, especially when you also have to type in all commands in full, very few abbreviations being understood. At least in this waiting time you have the chance to re-read some of the best descriptive text you will find in any adventure games.

Input commands may be quite complex, although the normal format of verb/noun will be all you need on most occasions. The parser used has improved over the years. It now looks for more in a sentence than most parsers, other than those from Magnetic Scrolls, whose Guild Of Thieves and The Pawn are certainly in a position to give Infocom a run for its money.

Complex parsers are all very well, but the more complex they are the greater likelihood of some strange responses. The Infocom system is still not perfect, direction commands may be separated by commas to achieve a series of movements, but link together PUSH SWITCH, W and this will not be understood, SIT DOWN AND EAT DINNER gets the response that "there is a noun missing in that sentence".

There is no doubt that Infocom adventures are among the best in the world, but it is only fair to other software houses to point out that they are not the be all and end all in the adventure world. They have superlative text, excellent plots and puzzles that are both interesting and logical. But they also require all words to be typed in full, take a long time between input and response and sometimes make a hash of understanding what you have typed in. For all that, I would still recommend them to anyone so start saving up now...

Superlative text, excellent plots and puzzles that are both interesting and logical.