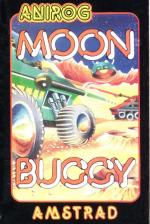 This game has been around before but never with such chunky graphics. Although it shows off Amstrad's colours nicely and has three different scrolling levels of landscape, the whole feel of the game is somewhat 'chunky'.

The plot is a simple one: you roll along a scrolling landscape in a buggy resembling a six wheeler C5, blasting boulders, leaping gaps and shooting rockets that fly overhead for the only purpose of dropping bombs on you.

You can come to grief by meeting a bomb, a carelessly placed boulder or by flying into a pothole worse than any to be found on the A10 arterial. Unlike the arterial where the coppers object to litter being thrown out of the car, the use of weaponry to remove obstacles is permitted. Tough luck for obstacles but good news for moon buggys. Now the bad news; it is not possible to fire a missile in any direction if you are in the process of boulder leaping and guess where the majority of boulders are? You've guessed, just after the potholes. Bad news for moonbuggys, good news for boulders.

On colliding with anything unsavoury, the chassis of the buggy stops dead and does a badly moulded blue jelly impression while your wheels carry on into the distance, curiously travelling through boulders and turning them yellow. How come they make it through and I don't? Like I said, the boulders can be blasted with rockets, to fire these, you press the fire button or whatever the keyboard equivalent is and zap! Out fly two missiles. One goes up to miss the anti-social rockets flying overhead, while the other one flies along the landscape and turns big rocks into little ones. Life is real tough for boulders.

Still, if you can keep this up for long enough you get to the next zone. Your intrepid reviewer showed a marked tendency to drop off and hence crash before getting that far but maybe this is just his lack of prowess with a joystick. The high score table was not beyond me however and I managed to displace a few perfectly harmless comments on Jack Tramiel and poor old Sir Clive.

This game was not very absorbing to me but then I never got beyond level one so there may be some goodies in there if you can hunt them out.

This game was not very absorbing but then I never got beyond level one so there may be some goodies in there if you can hunt them out.