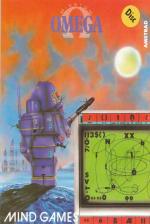 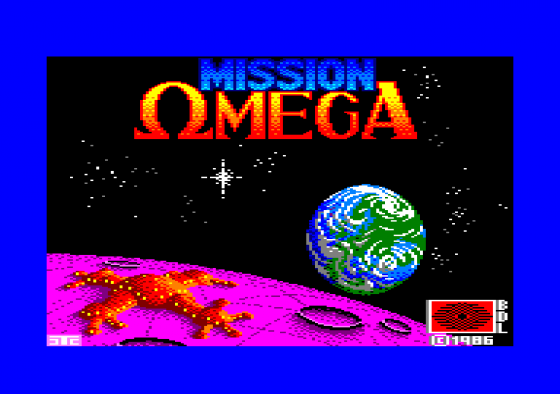 There's a huge alien spacecraft hurtling towards Earth, codename Omega. In one hour it will be blown out of existence by Earth defence systems. As the man on the spot - you happen to be commanding the nearest vessel - you are given orders to intercept and explore the spacecraft. To do this you must build a number of robots capable of exploring and overcoming the defences of the spacecraft and then supervise the mission from your vessel.

Robot games must be coming into vogue, this is the second we've had this month. The game is of the icon and menu driven sort where you drive a little arrow around and press fire to select an option.

You start on the main screen where you can select either map, build, control or launch mode. Launch means you've completed the search and the missiles can be launched. If you do this before the search has been completed you have failed the mission but it does give you a score.

Map shows you maps of the space craft, one small and divided into quarters, the other filling the rest of the screen and showing an enlarged version of a quarter. Only the explored parts of the ship are shown on the map. The large map shows the position of each of your robots. Something that isn't mentioned in the instructions is that pointing to a place that has been explored and pressing fire will show the room at full size with all its features.

The build section allows you to create and name a number of robots. You have a limited amount of material from which to create robots so you can either have a small number of heavy robots or many light ones. They can have different speeds. weapons, power units, methods of locomotion and sensors. Different sensors have different ranges.

The control section allows you to command the robots in the search of the ship. Selecting Manual, you can move the robots with the joystick and press fire to shoot. There are two other methods of control. Automatic sets the robot off exploring under its own steam, (Actually there isn't a steam driven robot. A real oversight on the programmers' part).

When it can find no more rooms to explore it. will stop and report. Also, any nasty little alien robots that it finds it will engage in combat, which is useful as combat is a little tricky on manual. Finally, there is program mode which can be used to send the robot to an appointed place. However, you can only send the robot as far as the range of its sensors.

There are lots of things to find on the ship. Some are to be picked up and these are displayed on the control screen when a robot collects them, You can also find transporter pads to get to other quarters of the ship, remarkably (for an alien ship) they are marked Otis - the lift company. Some corridors are barred by force fields. There are devices dotted around the ship that deactivate these, but not necessarily close at hand.

There are various options to choose. A continuous, 'hurry up' tune plays throughout. the game but it can be switched off. Every screen has colour bars which can be selected and the colours changed. And the game can be played with either keyboard or joystick.

I enjoyed playing Mission Omega, finding it quite addictive. Obviously the secret of success is to build the right sort of robot. More information about this would be nice but the instructions are very sketchy indeed. However, most things can be worked out in time.

My only quibble is that I would have liked the robots to be a bit more programmable. If you could direct one to go to a certain place, or home in on another robot, it would have made things a little easier. It takes quite a long time to play a game so there are hours of enjoyment in it.

It is difficult to have a fair crack at a game when the instructions conspire not to instruct. I remember reading a copy of Byte magazine about five years ago which described a game where you could design robots and then set them to do battle in a computer generated world. You could program your little tank and then trundle it off to do battle with a friend's tank.

When I first saw Mission Omega I hoped this was a version for the CPC. Wrong, your robots are all on the same side and difficult to program. Marvin, where are you?

Mission Omega starts promisingly enough. First build your robots, then send them on an exploration of a giant. spaceship. Trouble is, the instructions give very few clues as to what to do, what you're looking for or how to look for it.

The game degenerates into a endless wander around a maze, where the only thing that happens is that your batteries run down.

There's no doubt it looks swisho, but beneath that icon-pointer-window business there isn't much of a game.

Starts off promisingly enough. The trouble is that the instructions give very few clues as to what to do, what you're looking for or how to look for it. 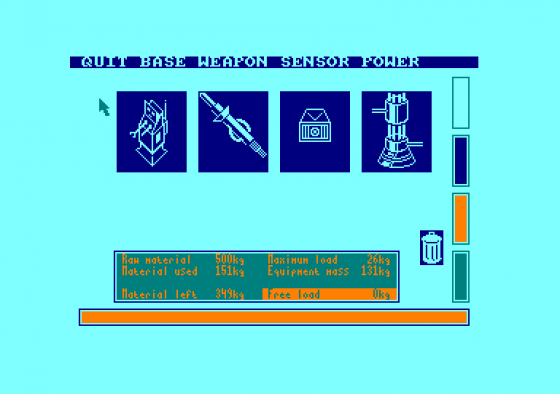