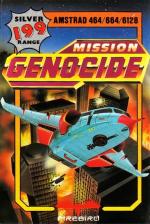 "All that glitters is not gold,
Often have you heard that told;
Many a man his life hath sold
But my outside to behold."
- William Shakespeare

Budget software houses usually claim that their £1.99 programs are as good as many £10 games, and the latest offering from Firebird bears this out. If you enjoyed Lightforce then you will just love Mission Genocide.

The plot is simple: You fly through space blasting hell out of a motley assortment of aliens and land bases. The thing which makes Mission Genocide really special is the scroll - the screen pans along the alien surface with a smoothness never before seen on the CPC. The majority of the screen scrolls from top to bottom, but a panel at the bottom stays as steady as a rock, showing your score, number of lives and some tactical information.

Your spaceship skims the planet surface. The original game design included tall buildings which you would crash into, but these were edited out - a good job too, since Mission Genocide is difficult enough as it is. You have two kinds of projectile to call to your aid, bullets and missiles. Bullets strike at airborne aliens, missiles at terrestrial targets.

As with all good arcade games, the aliens attack in waves. They don't look too spaceship-like, unless spaceships of the future are to be mutant cherries, but the bubbles are pretty.

There can be up to six aliens on screen at a time, which may not sound a lot, but when you are in the thick of it they form a fair-sized squadron.

All this action consumes a lot of processing power, so much so that it would be very difficult to squeeze any more in. To help you fend off the foe there is an auto-fire option: Press the spacebar and the air fills with gunfire.

You need to fly at the aliens to make the best use of this feature, particularly when a rank of six aliens attack simultaneously. It takes some skill, and luck, to get all of them, but with the computer worrying about the firing you can deal with bombing.

The planet's surface is littered with silos, which open to reveal extra features when you shoot a missile at them. Fly your space sedan over these features and the goodie bolts itself into place.

The bullet icon speeds up your rate of fire: Up to two of these can be collected, and the beefed up firing works wonders on your alien killing capability. Similar wonders can be worked on your missiles. The faster they are, the easier it is to blast the silos - and the more bits you can stick on.

The weapon additions are held in place with the help of glue. As this dries, the bits drop off although you don't actually see this happen. To prevent the reduction in firepower you need more glue, which can be obtained from the silos.

Dodging aliens is hard word, but it can be made easier by picking up a speed-up. Like the bullets, missiles and glue, you can take up to two extra speed-ups. The levels of all your accessories are shown on the tactical information chart next to the score.

It is worth picking things up, even if they are not needed. Glue is always drying, and each item comes with a small quantity of the sticky stuff. If the object is not needed, the glue is kept and the goodie scrapped.

If you scrap enough stuff you are awarded a bonus life. You can, in theory, win up to nine lives - but no-one is going to do that well. A Nemesis-like extra ship was mooted, but had to be dropped since it would have been messy.

The best thing to pick up is a shield, which protects you for five seconds after being activated. The clever thing is that the shield is not activated until you are hit, which guarantees that it will save a life. The active shield flashes and it can be used to ram aliens and to destroy meteors which cannot be shot.

Shields are most useful on the later levels, particularly in areas where gun emplacements blast you with a starburst of bullets, and glue does not affect the shield.

One type of silo to avoid is the black hole, as this sucks features away. You should avoid bombing silos as you fly over them too, since a hidden hole could appear. For safety, blast first, fly over after. As the program's author pointed out, it is better to miss a bonus than die in the process of getting it.

The twelve levels progress in deviousness - in one you fly under the planet surface, visible only through holes. To shoot some of the targets it helps to be psychic. The space-freighters on level three are held together with chains and look great.

The preview copy I saw was incomplete, but level four was finished - it was initially level one and had been moved when Firebird decided the game was too difficult, too early on.

Mission Genocide demands to be played on two levels, it is a no-holds-barred shoot-'em-up. Switch off your mind and set the phasers on kill. It is also a memory game: Learn the alien formations and what is in the silos. Glue and holes change places but all the other features can be learned.

Remember that anything can fire at you, though in the early stages they don't bother. In the under-the-surface stage, avoid large gaps, as emplacements are designed to fire into them.

Mission Genocide may be a Firebird game, but it certainly glisters.