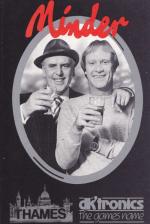 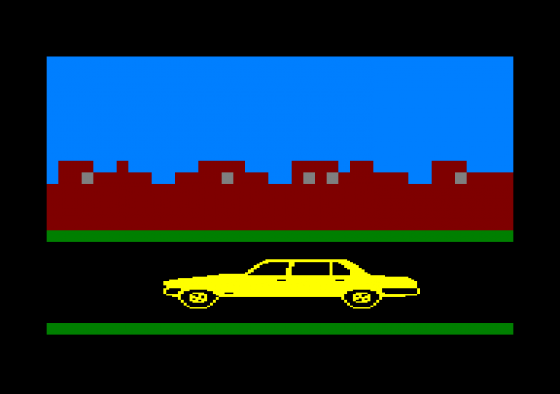 You all know the TV series (a quick word in your shell-like, the next series is destined to be the last) so the game of the show should have a fairly familiar ring to it. This is the DKTronics straight up honest guy with none of yer fancy loaders and loading screens version, in conjunction with Thames TV. The plot is as usual but with you as the budding Arthur Daley and a rendition of 'I Could Be So Good For You' constantly in the background.

You graft hard all day trying to grasp a few honest (well, almost honest) quid to take back to 'er indoors. The day starts early, off in yer jam jar, your pockets heavier by two grand, to pull a quick deal with a regular dealer before the rub-a-dub (the highly esteemed cultural centre, the Winchester Arms 1 opens.

There you try to shift such exotic wares as rubber suits, naughty magazines and ejector seats which have all parted company with the back of a lorry. If you can think of something to do with a rubber suit, a naughty magazine and an ejector seat, send your reply on the back of a five quid note to The Editor, c/o Amstrad User. A two pound prize will be awarded to the best reply on an official entry form.

The characters in the game tend to keep to civilised hours - you will not find them willing to answer the door after closing time. They also remember you from last time. If you offered them 25p for a rabbit hutch they get their wind up and give you the big 'E'. Next time you are lucky to be given the time of day.

When it is open, the pub is a good place to pull deals but each chat takes an hour and you may not wish to rabbit with some geezer about the quality of his garden gnomes.

Worse still, Sgt. Chisholm frequents the boozer and if he catches you with any nicked goods he will ask you to accompany him to the station (I don't know it officer, you hum and I'll play along!). The good natured copper is easily swayed into believing you are innocent by a generous donation to the police benevolent fund.

Terry is sometimes at the pub and you can get him to pick up goods, take them to the lock-up or deliver them. He can even be your minder. A word of warning at this point, do not get nasty with the customers. Not only are they not all playing the same game as you but if you monkey with them, they can get violent. This is not a pretty sight because they are bigger than you.

The idea is to fill your pockets, not the lock-up, so try to shift stuff as fast as possible. In true Arthur Daley style, there is nothing to stop you flogging goods you do not yet have. I like the way the mouths move on the characters as they speak, a nice touch. The problem is, to speak to them you have to hit their number within a few seconds of seeing them.

This game does not suffer from the 'I don't understand' problem of most adventure games. If it does not understand you it spouts sales patter, Good game, could be a nice little earner.

A good game, could be a nice little earner. 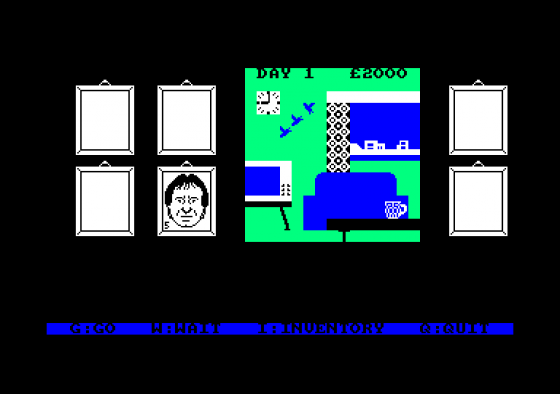